The Most Memorable Moments of Kanye West and Drake's Reunion Concert

The feud is over. Last night, two titans of pop music, Kanye West and Drake, publicly settled their longstanding differences in a joint concert at the L.A. Coliseum. In November, the music mogul J Prince helped broker a peace between them centered upon their mutual interest in the emancipation of Larry Hoover, a long-incarcerated Chicago gang leader. On Thursday, over two hours, the pair traded hits, paid each other compliments and talked about their religious faith. Here are the main takeaways from the show.

The concert was a display of friendly competition, emphasis on friendly

The bad blood between the pair runs deep: lyrical shots have been fired back and forth between their respective crews—West’s G.O.O.D. Music and Drake’s Young Money—for years. The rift hit its apex in 2018, when West’s close ally Pusha T traded vicious diss tracks with Drake, with the former publicly revealing that Drake had a son in “The Story of Adidon.” Drake would accuse West of spilling that personal detail to Pusha T, and proceeded to subtly diss West on the number one Travis Scott hit “SICKO MODE.” This year, Drake and West traded barbs in the press, on social media and in songs, with Drake going so far as to leak a song from Donda that featured André 3000.

But the pair agreed to reconcile last month, in part to raise awareness for prison reform activism. On Thursday, they appeared to be relieved, if not happy, to appear on stage together once again. They entered the stadium striding down the stairs shoulder to shoulder; when they got up onto the stage—a giant, barren white landscape that looked either like a hockey rink or a UFO—they hugged and exchanged heartfelt handshakes. They performed each other’s songs enthusiastically: West sang Drake’s 2010 hit “Find Your Love” (although he struggled to stay on pitch), while Drake returned the favor with a soulful version of “24.” “L.A.’s not finished, Ye’s not finished, Drake’s not finished,” he crooned. Later, West remarked on their collective accomplishments: “It’s like a hundred million hits between the both of us…we’d be out here for three days,” he said.

In this Verzuz era, fans have been clamoring on social media for a musical battle between the pair. On the Drink Champs podcast last month, West stoked the flames by saying that if he were to conduct a face-off with Drake, “I’m winning every situation.”

While the concert wasn’t officially a Verzuz battle, the subtext loomed over the night, and it was clear that each of them took the assignment very seriously. West came out swinging by energetically steamrolling through his biggest hits in semi-chronological order: “Jesus Walks,” “All Falls Down,” “Gold Digger,” “Stronger,” “All of the Lights.” It was a clear reminder that he’s ruled the past two decades of hip-hop and pop; that his body of work is nearly unparalleled. Drake acknowledged as much onstage, calling it a “dream… to be on stage with one of my idols while he’s running through one of the best catalogs in music, period.”

But rather than trying to match West hit for hit, Drake took a very different tack: by using the concert as a showcase for his new album, Certified Lover Boy. “I came to do some new sh-t for you all,” he said, and fans at the stadium responded enthusiastically, crying out in excitement from the very first synth notes of “Girls Want Girls” (167 million Spotify streams) and screaming every word to “Way 2 Sexy” (228 million streams). While West’s throwback songs came from 2004, the earliest songs Drake performed during his set were from 2018 (“God’s Plan”). It was a clever tactical juke: a reminder that while West might have a deeper catalog, Drake currently remains one of the biggest, if not the biggest, pop star in the world today.

West made a direct plea to Kim Kardashian

For the last decade, one of the marquee moments at any Kanye West show is the outro of his 2010 opus “Runaway.” He uses the tortured song as a confessional, an opportunity to monologue his darkest or most controversial thoughts. While he typically delivers these rants in autotune, West instead stripped back the outro to just piano and voice, singing over and over: “When you run away, I need you to run right back to me.” And at the end, he left no ambiguity about who he was singing the song to: “Run right back to me/ More specifically, Kimberly.”

Later in the show, West delivered a Kim Suite of sorts, first singing “Bound 2”—a 2013 love song detailing the early days of their relationship—before cutting himself off and launching into “Come To Life,” his heartbreaking recounting from this year that details the crumbling of their relationship. After singing the line “You know exactly where to find me,” he covered his face with his hands seemingly in anguish, and cameramen walked toward him slowly from all sides, as if personifying the oppressive glare of the spotlight. It was an extremely vulnerable moment in a night mostly characterized by bombast.

For the concert’s last song, the pair reunited one final time to perform their 2009 collaboration “Forever”; it marked their origin stories and how far each has come. But the song’s performance was notable for another reason: rather than deliver an off-color lyric about statutory rape, West instead rapped, “nope, nope, nope,” and laughed uncomfortably.

Mike Dean was the real MVP

The producer Mike Dean has long been West’s right-hand man, contributing in some way to nearly all of West’s studio albums. In more recent years, he’s joined West on tour to play synthesizer, piano and guitar. On Thursday, he never appeared visually, but dominated the night sonically by adding unpredictable instrumental jolts to West’s pristine production. He added a strobe-y synthesizer to “Touch The Sky” and menacing feedback on “Black Skinhead.” He absolutely shredded the riff to “I Wonder” on guitar, and his luscious piano noodling on “Runaway” was the ideal backdrop for West’s sermonizing to Kardashian. While Drake and West themselves more or less performed each other to a draw, it was Dean’s vital musicianship that pushed West’s set over the top. 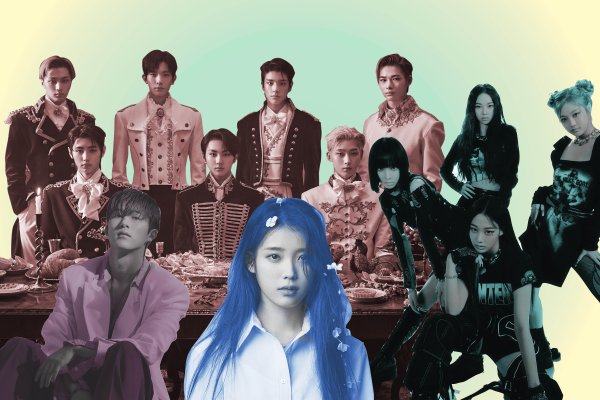 The Best K-Pop Songs and Albums of 2021
Next Up: Editor's Pick