Red Rocket Is a Spiky Comedy With a Fascinating, Magnetic Performance by Simon Rex

Red Rocket is the seventh feature from writer-director Baker, whose 2015 breakthrough, Tangerine—a raucous yet intimate everyday story of sex workers, trans women and doughnuts, co-written by Chris Bergoch—was one of the most exuberant films of that year. (Famously, it was shot on iPhone 5s fitted with special anamorphic lenses, though it was so big and whole that it never felt anything less than a “real” movie.) As a portrait of a scrappy human just trying to get by, Red Rocket—also cowritten by Bergoch—is something of a companion piece to that film, though it doesn’t have the same underdog vibrancy. It also seems veiled by a fine scrim of self-awareness, though that’s probably the sort of thing no filmmaker can help once his movies start earning the acclaim that Baker’s have. (His 2017 film The Florida Project was a critics’ favorite, and Willem Dafoe’s terrific supporting performance earned an Academy Award nomination.)

Brenda Deiss, Simon Rex and Bree Elrod
Courtesy of A24

Even so, Baker knows how to hook us, gently, from the first frame. We see Mikey on a bus, passing oil refineries and assorted scrubby landscapes, before he lands on the somewhat shabby doorstep of his estranged wife, also a sometime co-star in his porn films, Lexi (Bree Elrod). The daggers-of-death that shoot from her eyes give you a sense of her feelings about him. And though we don’t have all the details, we don’t wonder why: His face is bruised, and he arrives without even a duffle bag. All he’s got are the clothes on his back—a tank top and ill-fitting tight pants—a couple of bucks, and a cell phone. What’s this guy’s deal? Don’t you wanna know?

Mikey is desperate to get back into Lexi’s good graces, which also means insinuating his way into her bed. He must win over his mother-in-law, too, played by Brenda Deiss; he does so with an offering in the form of a yard-sale ashtray, though she likes him a lot better when he starts paying rent, thanks to the weed-selling enterprise he sets up almost immediately upon his reappearance in town. With no car of his own, he toodles around town on a too-small bike. And just as Mikey seems to be getting his life together—something he appears to be incapable of doing unless the women around him work overtime to help—he falls hard for Raylee (Susanna Son), the delectable red-headed counter girl at a local doughnut shop. Sleazily, he woos her. (He appears to be somewhere in his late forties; she, it turns out, is a few weeks shy of 18.) His face becomes a silent fireworks show of delight when he learns that her nickname is Strawberry. He’s already figuring out how he can market that.

Simon Rex and Suzanna Son
Courtesy of A24

What follows isn’t a love story, but more a tale of a guy for whom everything—sex, love, weed, loyalty—is transactional. Baker has set his movie in the summer of 2016, as Hillary Clinton and Donald Trump accept the nominations of their respective parties, perhaps as a way of nodding toward the beginning of an era: The era of wheeler-dealers who will do whatever it takes to get ahead. Mikey is something of a terrible person, though Baker gives his characters enough dimension that it’s not easy to plunk them into easy predator or victim categories. Strawberry, young as she is, has a clear sense of what she wants out of life, and though she may be temporarily under Mikey’s spell, her arc opens the door to another potential story, one of who’s-usin’-who. Son’s performance is wonderful: she’s fresh and sunny, all right, but she’s like a daisy with a tough little fringe of ambition.

Baker’s specialty is telling complex stories about people who might be seen as somehow living on the edge of society. That’s definitely Mikey. He’s charming when he needs to be, and far more optimistic than most mere mortals. Still, his eyes flash with cutting coldness whenever he sees his plans going south. Simon Rex has been acting for years, kicking around on TV and in low-budget comedies, as well appearing in the Scary Movie franchise. He’s a sometime rapper, and he’s worked as a model and MTV VJ. In the late 1990s he also appeared, under an alias, in several solo-masturbation videos. His performance here is fascinating to watch, with its quicksilver shifts from charming to alarming. Red Rocket isn’t the warmest of Baker’s films; it has a flinty edge that makes it hard to embrace. But as movie characters go, Rex’s Mikey, a magnetic egomaniac, is an extraordinary creation. He gets us on his side so easily, only to leave us there, sleeping on the wet spot, realizing we’ve gotten into bed with the totally wrong dude. 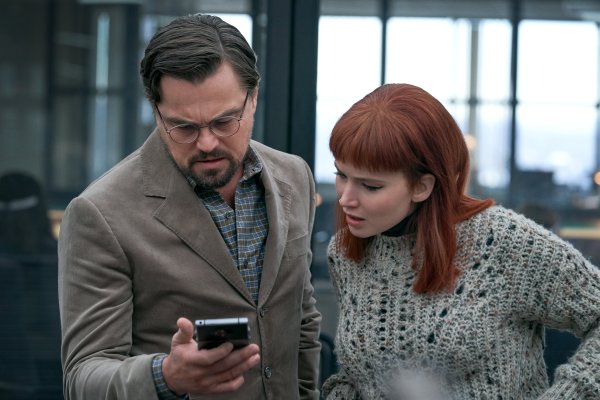 Adam McKay's Don't Look Up Buckles Under the Weight of Its Smugness
Next Up: Editor's Pick