Parents of School Shooters Rarely Are Held Responsible. This Case Is Different

Rhonda Hart was a high school junior in Wasilla, Alaska, in 1999 when a mass shooting thousands of miles away at Columbine High School left 12 students and a teacher dead. At the time, Hart had hoped the Colorado shooting would be a once-in-a-lifetime tragedy.

Then, nearly 20 years later, her own daughter was shot and killed at school. Kimberly Vaughan, 14, was in her first-period freshman art class at Santa Fe High School in Texas when a 17-year-old student opened fire on May 18, 2018, killing 10 people with guns that belonged to his father.

“You never think it’s going to happen until it does,” Hart says.

The accused shooter was charged with capital murder, but Hart also blamed his parents. Prosecutors did not pursue charges against the gunman’s mother and father, so Hart sued them instead. The lawsuit, which is still ongoing, charges that they knew their son was at risk of harming himself and others but failed to do “even the bare minimum” to make sure he could not get hold of his father’s firearms.

In the U.S., where parents of school shooters are rarely held responsible, it was the only avenue where Hart felt she could find some semblance of justice. “It’s pretty miserable,” she says. “I wish we had a lot more choices to pursue.”

On Dec. 3, a prosecutor in Oakland County, Mich., turned the tide when she announced she was charging James and Jennifer Crumbley with involuntary manslaughter after their 15-year-old son, Ethan Crumbley, allegedly shot and killed four classmates at Oxford High School on Nov. 30.

Oakland County prosecuting attorney Karen McDonald said at a news conference that the teen’s parents could have stopped the mass shooting but failed to act on multiple warning signs. One day before the shooting, a teacher caught Ethan Crumbley searching for ammunition on his phone during class, the prosecutor said. The school alerted his mother, who later texted her son that she wasn’t mad at him and that he had to “learn not to get caught.”

On the morning of the shooting, a teacher found a drawing by Ethan Crumbley that alarmed her because it depicted a handgun and phrases that included “the thoughts won’t stop,” “help me” and “blood everywhere.” The teen’s parents were summoned to the school by administrators who said Ethan needed immediate counseling. But the Crumbleys kept their son in school. And they didn’t inspect his backpack, which may have held the handgun his father purchased for Ethan as a Christmas gift days before, authorities said.

Gunfire erupted later that afternoon while hundreds of students were in the hallway making their way from one classroom to the next, school officials said in a statement. McDonald said the handgun was stored unlocked in a drawer in James and Jennifer Crumbley’s bedroom. “They had every reason to know he was dangerous,” McDonald said, “and they gave him a weapon and they didn’t secure it. And they allowed him free access to it.”

Some parents note striking similarities to other tragedies

Hart and other parents who have lost their children to gun violence at schools were floored by the ways in which the Oxford case reminded them of their own tragedies. “Some of the similarities here are why I’m getting so angry,” says Nicole Hockley, whose 6-year-old son Dylan was killed in the 2012 shooting at Sandy Hook Elementary School in Connecticut. “Have we not learned our lesson yet?”

The Sandy Hook gunman killed his mother before driving to the school, where he fatally shot 20 young children and teachers. But had the gunman’s mother survived, many people, including Hockley, feel she might have been found culpable in the massacre for ignoring warning signs that her son was disturbed. “Whenever I hear about preventable and senseless school shootings or deaths by firearms,” Hockley says, “it just takes my breath away for a minute.”

The Michigan prosecutor’s announcement of charges brought new hope to parents like Hockley and Hart, as school shootings have grown to become an American norm. In 2021, there were at least 149 incidents of gunfire on school grounds, leading to 32 deaths and 94 injuries nationwide, according to Everytown for Gun Safety, which uses media reports to track incidents. The number of incidents increased from 96 in 2020 and 130 in 2019. The Oxford massacre was the deadliest school shooting since Santa Fe.

“It really should be a wake-up call for all gun owners,” Moms Demand Action founder Shannon Watts says of the charges in Michigan. “We wouldn’t have school shootings if children couldn’t access guns.”

Between 70% and 90% of guns that are used in youth suicides, unintentional shootings among children and school shootings perpetrated by people under 18 are acquired from the home or the homes of relatives or friends, according to Allison Anderman, senior counsel for the Giffords Law Center. While it’s unclear how often gun owners are prosecuted for allowing their firearms to be used in shootings, experts say it’s far from common.

Why it’s so rare to hold parents responsible

There are many reasons why. For one, only 23 states have some form of a secure-storage law in place, Watts says. Prosecutors in states without firearm-storage laws may be reluctant to pursue charges against parents of school shooters because they might feel that they have a higher burden of proof, says Chris Mattei, an attorney and former prosecutor in Connecticut.

In school shootings that end with the shooter dying by suicide, or even when a child dies at home after accessing a gun, Mattei and other experts say there’s a national tendency among authorities to feel sympathy for the parents. “People say the same thing,” Watts says. “Oh, you know, this is such a horrible tragedy. We can’t punish them. They’ve suffered enough.” Watts says that sentiment is particularly widespread in states with lax gun laws.

Read more: Mass Shootings: ‘This Is What Normal Has Come to be Like in America’

But in Michigan, where there are no secure-storage laws, prosecutors say they had enough evidence of negligence to mount their case without having to rely solely on a firearm statute. “I am in no way saying that an active shooter situation should always result in a criminal prosecution against parents,” McDonald said, “but the facts of this case are so egregious.”

James and Jennifer Crumbley have each pleaded not guilty, and bond was individually set at $500,000. During a video arraignment, their defense lawyers said the gun was locked and that more information would come to light.

Could James and Jennifer Crumbley prove an exception?

But Mattei believes a conviction is likely if the case goes to trial and the parents don’t plead guilty beforehand, especially since the involuntary manslaughter charges they face do not harp on the firearm used in the attack. Prosecutors only need to prove gross negligence resulting in death, meaning that the parents failed to act when they had reason to believe there were circumstances that an ordinary person would recognize as capable of causing grievous harm, Mattei says.

Advocates say there’s no better time to find alternate ways to stop school shootings. Besides a rise in gun violence, K-12 public schools nationwide have seen a significant spike in “hostile behaviors,” with the number of physical attacks with a weapon nearly doubling from 2015 to 2018, according to a new report from the Government Accountability Office.

“For all of us who want to see a less-violent society,” Mattei says, “it should give us all hope.”

Mothers like Hart and Hockley are counting on a change. This Dec. 14, nine years will have passed since the Sandy Hook shooting. That means Hockley’s son Dylan has been dead more years than he was alive, his mother says. In the months after her son was killed, Hockley says, out of routine, she still called Dylan to dinner, still looked in her car’s rear view mirror to see his face in the car seat and still reached for his hand when she crossed the street. She still wakes up some mornings and can’t believe her son is gone. She daydreams about how tall he’d be, what hobbies he’d be into as a high school sophomore. “All I can do is imagine what he would be like right now,” Hockley says.

Hart hopes the charges in Michigan will start a trend that will hold more parents accountable, so others don’t have to feel her pain.

“We’re literally dying over here waiting for this to happen,” she says. 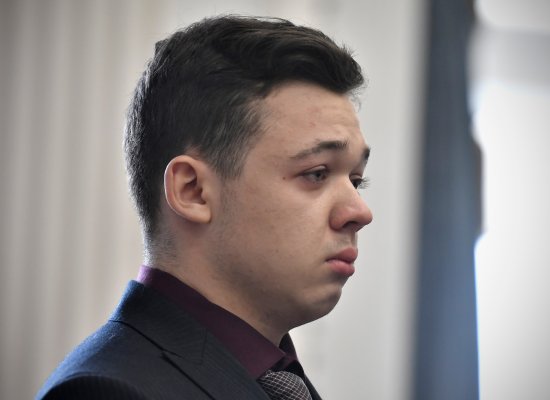 The Kyle Rittenhouse Verdict Makes Us All Less Safe
Next Up: Editor's Pick