Ten people were killed and at least 10 others wounded Friday in a shooting at Santa Fe High School in Texas — an incident Gov. Greg Abbott called “one of the most heinous attacks that we’ve ever seen in the history of Texas schools.”

The suspect, who is now in custody, used a shotgun and a .38-caliber revolver that he took from his father, Abbott said.

The investigation into the shooting is ongoing. Here’s what we know so far:

Ten people were killed in the Santa Fe shooting

Authorities said 10 people — eight students and two teachers, according to Santa Fe Independent School District Superintendent Leigh Wall — were killed in the shooting on Friday morning, and 10 more were wounded. Hospitals reported treating a total of 14 people for injuries related to the shooting, according to AP. Students at Santa Fe High School, which is located about 35 miles southeast of Houston, told local TV stations that the gunman opened fire in an art class during first period.

University of Texas Medical Branch in Galveston said doctors were treating three patients from the shooting, two adults and one minor. One patient, retired Houston police officer John Barnes, is in critical condition after being shot in the arm while engaging the gunman. Another adult, a woman, was wounded in the leg and was being operated on. The minor had a gunshot wound to the leg, doctors said.

Doctors at Clear Lake Regional Medical Center said eight patients, all students, were treated there. Six were released. Two remain in the hospital. One is in critical condition and the other is in fair condition.

Student Rome Shubert tweeted that he was shot in the back of the head, but was “completely okay” and in stable condition. KHOU 11 reporter Levi Ismail tweeted that Shubert was released from the hospital after only around four hours.

A suspect has been taken into custody

Galveston County Judge Mark Henry said at a press conference Saturday that probable cause was found on charges of capital murder and aggravated assault against a public servant. The suspect admitted to the shooting, according to a probable cause affidavit.

Two more people are currently being interviewed as persons of interest in the shooting.

Abbott said the shooter, who had no criminal history, used a shotgun and a .38-caliber revolver that were obtained from his father. Texas Sen. John Cornyn said the shotgun had a shortened barrel, and investigators are still determining if it was legal, according to AP reports.

“There simply were not the same type of warning signs that we’ve seen in so many other shootings,” Abbott said, noting that the suspect posted a picture on his Facebook page of a T-shirt that said, “Born to Kill.” Texas Lt. Gov. Dan Patrick also told Fox News that the shooting suspect “does not appear…to have had any issues with the school.”

Information obtained from the suspect’s journals, computer and cell phone indicate that he planned to carry out the mass shooting and then commit suicide, Abbott said.

Officials at a press briefing on Friday afternoon praised law enforcement officers who engaged the shooter.

“We know that because they were willing to run into that building and engage him right now that other lives could be saved,” said Steven McCraw, director of the Texas Department of Public Safety. “That’s absolutely important.”

The Santa Fe school district said police bomb squads were working to dispose of explosive devices found in the high school, whose roughly 1,400 students have been evacuated.

“There have been explosive devices found in the high school and surrounding areas adjacent to the high school. Because of the threat of explosive items, community members should be on the look-out for suspicious packages and anything that looks out of place,” Santa Fe Independent School District said in an update hours after the shooting. “Do not touch any items out of place and call 911 as we have agencies that can respond.”

The shooting comes during a year of action against gun violence

This is the 22nd school shooting of 2018, according to CNN. It follows another shooting on Wednesday at Dixon High School in central Illinois, where a school resource officer shot and wounded a former student who opened fire at the school. It comes three months after 17 people were killed in the shooting at Marjory Stoneman Douglas High School in Parkland, Florida. That shooting sparked mass protests and calls for tougher gun control restrictions in the U.S.

Less than a month before the shooting at their own school, a group of Santa Fe High School students participated in the national walkout against gun violence on April 20.

A clip from Houston’s KTRK-TV featuring an interview with one student from Santa Fe High School has gone viral in the aftermath of the shooting. In it, the student responds to a reporter who asks if she couldn’t believe a shooting was happening at her school.

“It’s been happening everywhere. I’ve always kind of felt like eventually it was going to happen here, too,” she said. “I don’t know. I wasn’t surprised. I was just scared.”

Police officers respond to a high school in Santa Fe, after an active shooter was reported on campus on May 18, 2018
KTRK-TV ABC13/AP

President Donald Trump addressed the shooting in remarks on Friday morning. “We grieve for the terrible loss of life and send our support and love to everyone affected by this absolutely horrific attack,” he said. “To the students, families, teachers and personnel at Santa Fe High, we are with you in this tragic hour, and we will be with you forever. My administration is determined to do everything in our power to protect our students, secure our schools and to keep weapons out of the hands of those who pose a threat to themselves and others.”

Texas leaders have voiced support for the students and teachers at the school.

“Nothing can prepare a parent for the loss of a child. This will be a long and painful time for these parents as they work their way through what has to be the greatest challenge they’ve ever dealt with,” Abbott said at the briefing. “I ask every parent out there, wherever you may be, to hold your children close tonight and let them know how much you love them.”

An FBI agent is seen in the parking lot of Santa Fe High School where at least ten people were killed on May 18, 2018 in Santa Fe, Texas.
Daniel Kramer—AFP/Getty Images
Subscribe to TIME

Write to Michael Zennie at michael.zennie@time.com, Katie Reilly at Katie.Reilly@time.com and Jamie Ducharme at jamie.ducharme@time.com. 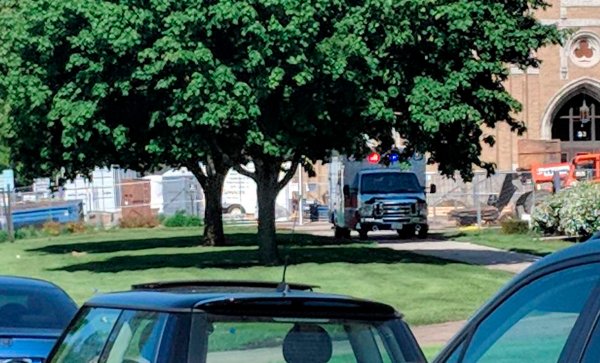