Independent Musicians Are Making Big Money From NFTs. Can They Challenge the Music Industry?

A version of this article was published in TIME’s newsletter Into the Metaverse. Subscribe for a weekly guide to the future of the Internet.

It’s brutally hard for most musicians to make money in the streaming era. Artists get paid fractions of pennies per stream, with many struggling to find sizable audiences at all: Data from 2019 and 2020 shows that 90% of streams go to the top 1% of artists. Even a moderately successful artist like Daniel Allan—whose songs got millions of plays in 2020—only received a few hundred bucks a month from streaming, requiring him to take on jobs like mixing and mastering other artists’ music to pay the bills.

But over the past half year, Allan has turned to a different model that allows him both financial and creative freedom: NFTs. While the pandemic kept Allan largely at home and unable to make money from playing live concerts, he has been selling digital copies of his electronic pop songs as NFTs—non-fungible tokens—for thousands of dollars each. He spent months cultivating relationships with NFT enthusiasts, built a community of devoted fans online and then leveraged this popularity to raise 50 ETH ($140,000 on the day of trading) in a one-day campaign to crowd-fund his upcoming album, Overstimulated. The campaign auctioned off 50% of Allan’s share of future master royalties—with the half he’s keeping a far better deal than most major-label artists receive—while giving him a hefty advance and creative autonomy. Allan also sells songs individually on the NFT music platform Catalog—which doesn’t require him to surrender the rights to his work. Combined, he says he now makes 85% of his living off NFTs.

Hundreds of musicians are following Allan into this world. On Catalog, 140 artists have sold over 350 records for more than $1 million combined. In the digital collective Songcamp, dozens of musicians from across the world are forming teams to crank out music and multimedia creations. Altogether, the goal of these NFT-based musicians isn’t to top the charts, but to push technological boundaries and carve out a living outside of the record label system, which has dominated the music industry for decades. “I don’t think this creates rich artists,” Allan says. “What this does is create a musical middle class.”

Time will tell whether music NFTs are a mere byproduct of a bullish crypto market or a transformative force destined to upend the music industry. While optimists talk of a new “creator economy” and artistic autonomy, skeptics voice concerns about utility, and whether the current model of music NFTs will scale beyond a handful of artists who are heavily involved in the crypto community.

Who is spending thousands of dollars on records that used to be 99¢ on iTunes? Many of the early buyers of music NFTs are crypto enthusiasts who are financially invested in seeing these spaces succeed; their purchases are both speculative assets and ideological stands. “In the same way that you buy art that want to put in your apartment, I want to listen to this music and enjoy it—and it’s a different feeling to own it,” Brett Shear, an NFT collector who owns 45 songs on Catalog for which he paid more than 40 ETH (currently $177,000) says. “I’m happy spending money on artists that I believe in their vision—and in addition to that, I do believe that music NFTs are going to be significantly more valuable in the future.”

Some artists are raking in unprecedented money from these deep-pocketed fans: the Chicago rapper Ibn Inglor, for example, raised $92,000 by selling various opportunities for fans—including shares of his upcoming album’s royalties—as NFTs. But for many artists, equally important to the financial windfall has been the emergence of dedicated fanbases who are coalescing around groups on Discord, the preferred platform for NFT and crypto enthusiasts. Allan subscribes to the idea that having “100 true fans” is better than having many casual ones—so he spends 6 to 8 hours a day interacting with his fans on his Discord, where they offer encouragement, feedback and memes. Because many of them have bought a share of his masters from him, they are emotionally and financially invested in his success. For his next project, he wants to break down the wall between artist and fan even further. “I want to be like, ‘Here are 20 demos, let’s make an EP together,’” he says. “There are a lot of creative people in my Discord but they haven’t necessarily had the mechanisms to be able to exercise their creativity.”

In building up community and infrastructure, Allan and others see NFTs as a viable alternative to the current system of major music labels. Labels have long been powerful in the music industry because they provide artists with cash up front, mentorships, mass distribution and strategies to thrive. But in return, they usually assume creative control and the rights to an artist’s masters, allowing them to use the music in perpetuity. (Owning masters was so important to Taylor Swift that she is re-recording all of her old albums from scratch.) NFT musicians believe that a new model like the one offered by Catalog might be able to provide financial stability, creative freedom and community all in one go.

Haleek Maul became a believer in the power of NFTs after a decade in the music industry, including being signed to labels, led him to grow disillusioned with the system. “There was a large degree of manipulation and a lack of regard for my wider vision as an artist,” he says. Last month, Maul sold 4 songs as NFTs for 56 ETH (now $261,000). Maul also has a thriving Discord, owns his masters and is using the funds he made from NFT sales to build a music and art studio in Barbados, which he hopes will uplift a community that often suffers from brain drain.

“Before, your fanbase couldn’t be in the label meetings with you. But now we all are the label together,” he says. “It’s like being in the auction house window versus going and campaigning for what you believe in.”

Latashá, an L.A.-based musician who has sold over 50 music and multimedia NFTs, says that the ability of labels to nurture talent from the ground up was already on the wane before the rise of NFTs. “I haven’t connected with a label in years that was fully into developing artists anymore,” she says. “Artists had to before really cultivate numbers on platforms like Instagram, TikTok and Twitter before a label would even look at them. I think it’s important for artists to think about their autonomy.”

As individual artists build ecosystems around them, more collaborative efforts are also amassing momentum. Songcamp, a collective founded in March, has hosted songwriting camps for dozens of previously unconnected songwriters, with those new creations selling for thousands of dollars on Catalog. The songs then received both visual treatments from artists and accompanying narrative stories in their public rollouts. “Songwriting camps are often no longer fun after the music is made: it gets stuck in this thing we call the music industry, and no music ends up coming out,” Matthew Chaim, Songcamp’s founder, says. “We decided: let’s run camps where the fast and fun continues into visual creation, release distribution and monetization of the music, since we have the canvas to do that now in Web 3.”

Major industry players are also dipping their toes into the space, hoping to not get left behind. Warner Music Group has a partnership with Genies, a company that creates digital avatars and wearables. The Grammys are selling NFTs. And Universal Music Group is hoping to strike gold with a Bored Ape Yacht Club band, featuring primate characters from the incredibly popular NFT collection of the same name.

A technology in its infancy

NFT records will likely never replace the streaming powerhouses and their ease of use. (Audius, a crypto streaming platform built in 2018, has about 7 million monthly active users, compared to Spotify’s 381 million.) The NFT music space has high barriers to entry for many: it prioritizes artists who are tech-savvy, extroverted, and able to be constantly online and releasing content. “You can only give so much of yourself to your community,” Maul says.

And for now, the purpose that NFTs serve for music fans on Catalog is more conceptual than functional. This isn’t like Martin Shkreli buying the only copy of the Wu-Tang Clan’s Once Upon a Time in Shaolin. Others can still listen to the song all they want. In most cases, buyers also aren’t purchasing the actual rights to the recording or composition, meaning they’re mostly paying for virtual bragging rights and to support artists they feel are undervalued by the traditional system.

Mat Dryhurst, a technologist who works on projects at the cutting edge of digital music—including in AI—is skeptical about the way that NFTs are being rolled out in the music space. “I’m not 100% convinced that the mechanisms of collectibles are a perfect fit for a crypto music ecosystem that I would like to see,” he says. “I would like to see ways to support artists in the album process that don’t involve doing all the things that Web 2 [the current iteration of the internet as most people know it] made you do, like going online all the time and updating people with music you made in the last week.”

Dryhurst is more interested in looking into how NFTs and NFT-adjacent technologies might be used to cultivate music collectives that might communally own a physical concert space or recording studio. “Fundamentally for me, the lifeblood of a lot of music is giving people a place to make music and enjoy music together,” he says. “The optimistic part is thinking about how to take the vibrancy of strangers with a shared purpose in virtual space—like a Discord group—and coordinate them to support spaces, or a network of spaces, in real life.”

But whether music NFTs ever reach mainstream saturation, they’ve already transformed the lives of many artists for whom the previous system was failing. “I felt that a lot of my career was making a certain type of music that I had to make—and at times I didn’t really connect with,” Allan says. “From an artistic standpoint, I just feel like NFTs and Web 3 in general can create a much brighter space for art.”

Subscribe to Into the Metaverse for a weekly guide to the future of the Internet. 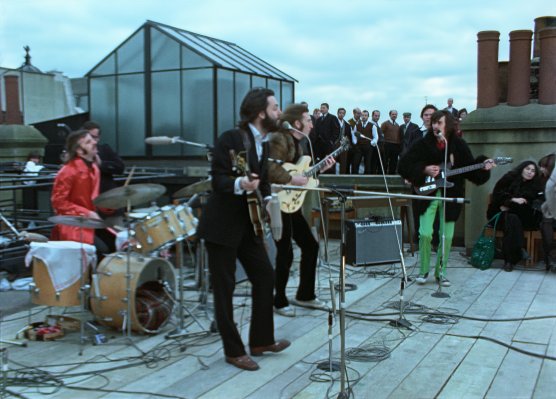 "Get Back" Reveals The Beatles' Breakup in Vivid Detail
Next Up: Editor's Pick