New Study Explores if a Vaccine Can Prevent Breast Cancer

Harnessing the immune system to target cancer has long resided on doctors’ wish lists, with very little promise of becoming reality. Because cancer cells are normal cells that mutate to grow out of control, directing the body to destroy these cells is a risky endeavor with potentially dangerous outcomes.

Advances in immunotherapy, however, have led to powerful drugs that can help immune cells better distinguish between cancer cells and healthy ones, and researchers are now testing the idea of whether the immune system can be trained to recognize and destroy breast cancer cells in the same way that it dispatches viruses or bacteria.

Dr. G. Thomas Budd, staff physician at the Cleveland Clinic Taussig Cancer Center, is leading a potentially ground-breaking study of a breast cancer vaccine that could help women produce antibodies and other immune cells that protect them from getting cancer. The vaccine is designed to target a particularly aggressive form of the disease, known as triple negative, that currently has very few treatment options. Triple negative cancer lacks the molecular flags—for estrogen, progesterone or HER2—that common breast cancer drugs target.

The first phase of the study will focus on safety and include 18 to 24 women who have already been diagnosed with triple negative breast cancer and treated with standard therapies, which include chemotherapy, surgery and DNA-interfering drugs that inhibit cancer cells’ ability to copy their genes and grow. They will receive three doses of the experimental vaccine, two weeks apart, and Budd and his team will look for side effects and determine whether the participants produce any immune response directed against the cancer targets. Budd’s team will also see if the women’s cancer returns.

Ultimately, he says, if this early phase indicates the vaccine is safe and shows promise in triggering an anti-cancer immune response, the study will expand to include women at high risk of developing triple negative cancer, but who haven’t been diagnosed yet, to see if immunizing them could help prevent the cancer from occurring in the first place. Women with BRCA1 mutations as well as Black and Hispanic women are more likely to develop triple negative cancers, so including these women in the study will help demonstrate how effective the vaccine might be.

“I would say this could be game changing,” says Budd of the approach. While others have tried to develop breast cancer vaccines, targeted against some of the more common features of breast cancer cells like the HER2 receptor, those efforts haven’t led to dramatic success yet. That may have to do with the fact that the vaccine targets things on the breast cancer cells that also appear on healthy cells, which makes them more toxic and less efficient in blocking tumors from growing.

The vaccine Budd is testing was based on work by his Cleveland Clinic colleague and immunologist Vincent Tuohy. It targets a never-before-tried breast cancer protein called alpha lactalbumin, which breast cells actively express only when a woman is lactating. If she’s no longer lactating, the gene for the protein goes silent, and the protein isn’t produced. It turns out, however, that 70% of triple negative breast cancers actively produce this protein, which makes it a reasonable target for the immune system. Tuohy showed in studies with mice that training the immune system to recognize this protein with a vaccine effectively preventing tumors from forming, and also slowed growth of existing breast tumors in the animals.

That data convinced the Food and Drug Administration to support the first studies in humans, which Budd is leading. With funding from the Department of Defense, his team is now recruiting women with triple negative breast cancer who are in remission and treating them to see if the vaccine is safe, and, hopefully, if it can prevent recurrence of their disease.

From the animal studies, Budd believes that the vaccine will be most effective in preventing disease, or preventing recurrence, and is hopeful that once this first trial shows the vaccine is safe, his team can start vaccinating healthy women at high risk for triple negative breast cancer. “I do think the [target] we are using makes a difference, and the major lesson from previous vaccine trials shows that ultimately we ought to move more to the prevention setting than the treatment setting,” he says.

The trial could be a milestone in establishing the usefulness of immune-based approaches in treating breast cancer, including its most intractable forms. Some immunotherapy drugs that manipulate the immune system and make it easier for immune cells to target breast tumors have demonstrated some anti-cancer activity, but it’s not enough. “Those showed us the bear can dance, and we’d like to teach it new steps,” says Budd about the vaccine strategy. 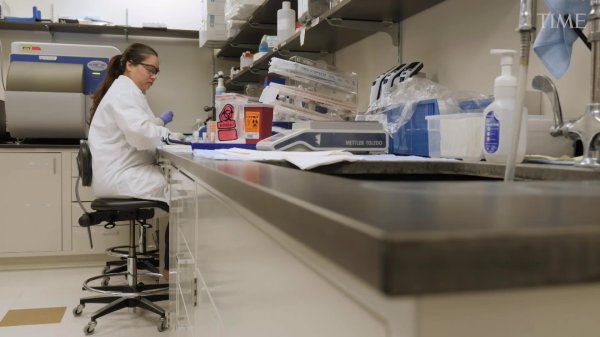 Changing Cancer Care, So Patients No Longer Feel Like a Number
Next Up: Editor's Pick