Movies that seem assured of how endearing they are usually end up being the least endearing of all. Writer-director Paul Thomas Anderson’s ‘70s retro romance Licorice Pizza has plenty going for it: a vivid San Fernando setting, to remind clueless East Coasters that Los Angeles is hardly synonymous with Hollywood; a breezy soundtrack that avoids all the era’s usual suspects (so long Abba’s “Dancing Queen,” hello Suzi Quatro and Chris Norman’s “Stumblin’ In”); and, perhaps best of all, a fantastic breakthrough performance by an actress none of us saw coming.

But Licorice Pizza feels pleased with how casual and effortless it is, which is the exact opposite of being casual and effortless. And while the story’s lead woman character is the best thing about it, somehow Anderson’s focus still tilts more toward the guy. Gary Valentine (Cooper Hoffman) is a mildly accomplished 15-year-old actor with bravado to spare. He isn’t picky about how he makes a buck: one minute, he’s dutifully auditioning for a Sears commercial requiring an acrobatic quick-change routine involving a three-piece husky-sized suit; the next, he’s setting himself up as a waterbed entrepreneur. It’s all the same to him: he’s the king of the hustle, at least among the Clearasil set.

But his savoir faire fails him on school-picture day, when he meets a girl—or, more specifically, a woman of 25, an employee of the photographer—who wants nothing to with him. With her deadpan gaze, she looks like she’d rather be anywhere else. All legs and sandals and bad attitude, Alana Kane—played by Alana Haim, of the pop-rock outfit Haim, in her first acting role—strides into the movie wearing that ingenious and mystical garment known as a skort. Why do birds fall down from the sky every time she walks by? You’ll know when you see this movie.

Gary falls for this blasé goddess immediately, paddling around her like a not-yet-housebroken puppy. She rebuffs his entreaties for a date, citing their age difference as a key deterrent, though the lack of sophistication behind his panting eagerness is the real problem. “Stop! I can hear you breathing,” she says, exasperated, as he scuffles around her, invading that thing we now call personal space. But eventually he wears her down. They go on a thing that’s not really a date; then they become grudging friends but also business partners. But there’s always some romantic jealousy percolating beneath the façade of indifference they present to each other. The suggestion is that they’re meant to be more than just friends.

Anderson has said that Gary’s character was inspired by the teen exploits of producer and former child actor Gary Goetzman, and the movie does have an entertaining, insiderish vibe—you leave it fully convinced that, in the Valley, in the 1970s, the fake it til you make it strategy could really work. And there are wonderful touches here, endearing gags that remind you this is, after all, the same filmmaker who gave us perceptive, woolly delights like Hard Eight and Boogie Nights: the way Gary pretends to misremember the phone number Alana has just recited to him, even though he’s already committed it to heart; the appearance of Skyler Gisondo, a former child actor himself, in a small role as a suave teen heartthrob—his entrance, in a turtleneck-and-blazer combo, should light the Internet on fire, if the Internet had any sense; a tiny but smashing John C. Reilly cameo that’s best left undescribed, so you can discover it yourself.

This is Anderson in his less sculpted mode: Licorice Pizza isn’t as dot-every-i meticulous as The Master or Phantom Thread, and that’s a plus. Still, there are excesses that could have been excised: Bradley Cooper’s extended bit as hotheaded hairdresser and Barbra Streisand beau Jon Peters wears out its welcome. And Anderson can’t resist including not one but two scenes in which John Michael Higgins speaks loud mock Japanese, for alleged laughs—as if retro-mocking white boorishness of the past were in some way a corrective.

The big problem with all of these little distractions is that they divert attention from Haim and her performance. Alana Kane lives at home, with her sisters, under the oppressive eye of her parents (all played by the actual Haim family). She’s not sure what to do with her life, and she sees it melting away before her. She needs a little of what Gary’s got: part of it is youthful brashness, but mostly, he’s just got an exuberant, entrepreneurial spirit. The actor who plays Gary, newcomer Cooper Hoffman, is the son of Philip Seymour Hoffman, one of Anderson’s signature actors, and his presence here feels like the continuation of a circuit. The younger Hoffman has an easy charm; his smile has the same mischievous curve as his dad’s.

But while Gary, with his rambunctious ambition, is leagues ahead of most 15-year-olds—“I’m a showman! It’s my calling!” he blurts out by way of advertisement early in the movie—he’s still not good enough for the celestial wisecracker who stands before him. Haim’s Alana, with her silky slouch and ever-alert eyes, is a live-wire of understated contrasts. She’s the cigarette you shouldn’t smoke, the stop light you shouldn’t try to run. Haim plays everything behind the beat, even though Alana is always two or three steps ahead of everyone else, including Gary. She has her insecurities, but they’re a temporary state. Her impatience is a virtue—it stands to protect her from idiots.

Yet Licorice Pizza doesn’t give Alana Kane the ending she deserves. The movie wraps up with a pat wish-fulfillment fantasy rather than the tangy, bittersweet one it seems to be headed for. Why does the terrific girl always have to settle for the sweet but not quite adequate suitor, just because he’s trying the hardest? The conventional wisdom is that audiences will melt if you just give them a mouth-breather with good intentions. It’s an automatic triumph if he gets the girl, even if she has to fold herself up smaller to fit his happy ending. Licorice Pizza aims straight for the hearts of teenage boys everywhere, even the full-grown ones, pumping them full of hope and optimism. Just be yourself, and the woman of your dreams will eventually stop rolling her eyes and come around. It’s easy, really. Especially if you never stop to call up from the bottom of the pedestal, suddenly realizing that you’ve forgotten to ask her what she wants. 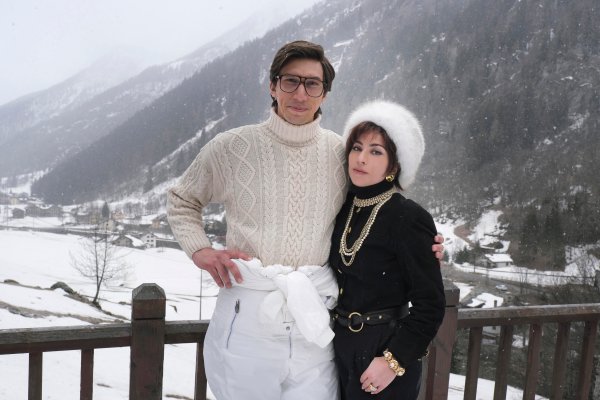 The Outrageous True Story Behind House of Gucci
Next Up: Editor's Pick