'They Want the West to Be Frightened.' Ukraine's President on Why Russia Sent Troops to the Border

“They want us to be afraid,” Volodymyr Zelensky, the President of Ukraine, says as his plane starts to descend, bringing him home from a trip to the war zone near his country’s border with Russia. He’s referring to the Russian troops that have massed along that border during the past two weeks, forcing the world to guess at the intentions of Russian President Vladimir Putin.

From Kyiv to Washington, diplomats, intelligence officials and military experts are straining to discern the meaning of Russia’s troop movements and escalating rhetoric. Is it a show of force? A sign of an imminent invasion? Or a test of resolve for Ukraine and its allies?

Zelensky has his own read on the Russian message. “They want the West to be frightened of Russia’s strength, of her power,” he says in a wide-ranging interview with TIME on April 9. “There’s no big secret here.”

That motive might help explain some of Moscow’s behavior. Had the Kremlin really set out to invade its neighbor, its troops might have tried a little harder (as they did during their last invasion of Ukraine, in 2014) to maintain some element of surprise. Instead the Russians have done the opposite. They have spread footage of their military build-up on social media. They have sent warships to menace Ukraine from the sea and gathered tens of thousands of troops at the border—the most since Russia’s annexation of Crimea seven years ago. Russia has warned the U.S. that support for Ukraine could spiral into a wider war. On state television, a Kremlin propagandist even suggested launching a pre-emptive nuclear strike that would, as he put it, scare the Americans off.

But Zelensky, who entered politics only two years ago after a long career as a comedian, does not appear to be buying the bluster. “I want to get this straight,” he says. “We are not claiming that there will be a real escalation. It might simply not be in anyone’s interests to have one.”

That doesn’t mean he is relaxed about the armies assembled at his doorstep. “What they want to do,” Zelensky says, “is raise the temperature just enough to show that the West will waver in its support for Ukraine, that they do not really see us as a partner.” As Zelensky puts it: “It’s a kind of test.”

So far the U.S. appears to be holding firm. In response to the first military standoff of his tenure, President Joe Biden has pledged his “unwavering support” to Ukraine, including through military aid. His Administration has urged European allies, especially France and Germany, to stand with Ukraine as well.

Zelensky and his government would like to see more, especially when it comes to high-end weapons. The President’s chief of staff, Andriy Yermak, puts that request more bluntly than his boss. “Ukraine is holding the line against Russia, not just for us, but for the West,” he tells TIME. “And where does the U.S. deploy its Patriot Missiles? The closest ones are in Poland. They should be here.”

But those missiles, which are designed to repel an attack from the air, are not at the front of Zelensky’s mind at this stage in the conflict. During a call with the secretary general of the NATO, he asked the alliance to give Ukraine a clearer path to membership and, more immediately, to increase its presence in the Black Sea to deter the Russians. To his own nation, Zelensky seems focused on projecting a sense of calm, even at the risk of seeming reckless.

His trip to the east was a case in point. On the morning of April 8, Zelensky boarded his plane, a somewhat rickety Antonov model, and flew to the edge of the war zone with a coterie of generals, some of whom looked a lot more nervous than their commander in chief. “Let’s hope the cannons stay quiet today,” one of them remarked during a cigarette break upon arrival.

Among their first stops was a military outpost near the village of Shumy, a cluster of cabins and potato patches with only a few inhabitants. In order to reach it, the President had to take a military helicopter, then drive for nearly half an hour along unpaved roads and, for the last few hundred paces, hike through the dirt with a handful of soldiers and bodyguards. One of them lugged an enormous machine gun a few steps behind Zelensky.

The President came to that particular village, he said, because it marks a “dark spot” on the map of Ukraine. It is the place where the current hostilities began about two weeks ago, with a volley of shots from a sniper rifle.

On the morning of March 26, Sergiy Barnich, a 47-year-old staff sergeant in Ukraine’s armed forces, came out of his trench and began to look for enemy mines in the brush. As he scanned the ground, a bullet cut through the air and hit the officer in the upper thigh, ripping open his femoral artery, according to the military’s investigation of the incident. His comrades ran over to help as he bled to death. Two of them, Sergiy Gaychenko and Maxim Abramovich, were killed the same way, one shot through the neck and the other the heart, according to their commanders. They were both 27 years old. No one ever saw the sniper.

“There was no tactical reason to attack that post,” says General Ruslan Khomchak, the commander of Ukraine’s armed forces, who oversaw the investigation of the incident and accompanied Zelensky to the place where it happened. “They just shot those boys in cold blood,” he says.

Within days of the shootings, Russia began to gather more forces along its border with Ukraine and in Crimea. The Kremlin urged the West to mind its own business, announcing through a spokesman that the massing of troops “should not worry anyone and does not pose a threat to anyone.” But Russia’s propaganda outlets ramped up the rhetoric, accusing Ukraine of staging attacks against civilians and goading Russian forces to invade.

Lt. Col. Oleksii Noskov, who helps oversee Ukraine’s response to the Russian information war, says that all the Kremlin’s actions in the past two weeks appear to be at least as much about propaganda as any military strategy. “It’s a war of headlines,” he says. Even the sniper assault on the outpost near Shumy may have been intended to draw fire from the Ukrainians. That would have allowed Russian state television to shore up its narrative about Ukraine going on the attack with the help of its friends in NATO. “This is the story they are pushing,” says Noskov.

Russia may need that narrative in order to justify its own attacks. But to Zelensky and his generals, it seems at least as likely that Russia wants to give the West an excuse to back away. If there are bullets flying from both directions, it becomes easier for the U.S. and its allies to assume a position of neutrality, which is precisely what Zelensky wants to avoid.

When Zelensky reached the military outpost near Shumy, officers took him on a tour of their trenches and tunnels. General Khomchak pointed toward power lines not far away, and said they marked the start of the Russian positions, well within reach of a capable sniper. The closest Ukrainian position to that line is a system of trenches the troops have nicknamed Vietnam, a nod to the mud and morass of a war they had seen in the movies.

Standing there in his bulletproof vest, Zelensky didn’t promise to avenge the men who died in defense of these dugouts. Instead he questioned the wisdom of taking that ground in the first place, which Ukraine did in 2018, the year before Zelensky was elected president, with an assault against the Russian-backed positions. “For some, that meant we were the tough guys,” he says, glancing around at the field of shrubs. “For others it meant their sons would not be coming home.”

Zelensky does not intend make such trades again. The risks are too high. Putin still could decide to mount a full-scale invasion, one that Ukraine would have little chance of resisting. “And that is frightening,” Zelensky admits. But he’s trying not to show it. 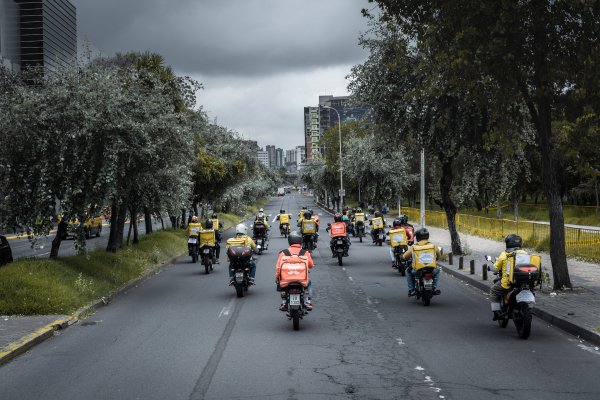 Delivery Drivers in Latin America Fight for Fair Treatment
Next Up: Editor's Pick