In this image from House Television, House Minority Leader Kevin McCarthy of Calif., speaks on the House floor during debate on the Democrats' expansive social and environment bill at the U.S. Capitol on Thursday, Nov. 18, 2021, in Washington.
House Television/AP
By Philip Elliott

Republican Leader Kevin McCarthy rose at 8:38 p.m. Thursday, ostensibly to speak in opposition to Democrats’ social-spending and climate bill. But it quickly became apparent that he was auditioning for the job of Speaker of the House.

And by the time he wrapped at 5:10 a.m.—eight hours and 32 minutes later—it was clear that he had an audience of one: ex-President Donald Trump, a figure who is still widely seen as the true commander of the Republican Party and still a critic of McCarthy for not doing more to keep Trump in the White House after his electoral loss.

So McCarthy, who has said he had to keep Trump close to keep him from engaging in even more extreme shenanigans, rose in an act of contrition to the 45th President. He criticized the Nobel Peace Prize committee for denying Trump the recognition and blasted Democrats for two impeachments: “​​It was all lies.” He took a personal dig at House Speaker Nancy Pelosi for taking three trips to Europe in the last three months on what he mused might be her “farewell tour” and offered without evidence that she might leave office before this term ends. He mocked her fancy refrigerator and ice cream, and at one point before 2 a.m. slid into a mock female voice to mimic her comments. And McCarthy repeatedly claimed China unleashed COVID-19 on the world—despite new doubts about the virus’ origin raised just hours earlier in a widely respected journal.

McCarthy is an ambitious pol, albeit not one who necessarily focuses on details. He’s had his eye on the Speakership since he served as the recruitment chairman for House Republicans and helped to usher in the Tea Party wave of 2010. He is the only one of the three self-proclaimed “Young Guns” to lead a new generation of Republicans to still remain in elected office, the other two dispatched by what would now be called Trumpist politics. McCarthy’s not a shoe-in for the Speakership if Republicans win in 2022, though. He sought the gig once before, back in 2015. He dropped that at the last minute as it seemed like a defeat was imminent.

Now, he’s again within reach of the job. But to get it, he will need Trump’s blessing. One bad word from Trump can sink McCarthy’s ability to win the majority of the 435 voting members of the House. It’s why McCarthy reversed course Thursday and said he would not just restore censured Rep. Paul Gosar’s committee assignments but also those of Rep. Marjorie Taylor Greene, two polarizing figures to say the least. And at a news conference before he started his gabfest, McCarthy disclosed that Trump had phoned him just that morning from a golf course.

Then there’s the not-so-quiet rumor rumbling through conservative circles that Trump himself may prefer the role of House Speaker, one fueled by comments made by Trump’s last chief of staff, himself a former House member. The literal passing of the gavel between Pelosi and her successor could be an incredibly spiteful moment if that heir is Trump. A perch at the Capitol would be useful for his 2024 campaign. Plus, the perks of the Speakership are pretty great, including the use of a government plane and a role as third-in-line for the presidency. There is no requirement, though, that the Speaker be an elected member of the House. Congress has never had a non-member serve as Speaker, but America also never had a President like Trump, either.

But, McCarthy is instead posturing for himself to be part of the hand-off. “I want her to hand that gavel to me. I want her to be here,” McCarthy said, again repeating the unfounded rumor that Pelosi’s resignation was imminent.

At another point, he was explicit—even if that candor was unintentional. “Where’d the Speaker go? Did you fall?” he asked. “Can I be Speaker?” he inquired at the five-hour mark as the Democrats took turns presiding over the House.

Democrats, who around midnight decided to delay the vote to Friday morning and left the chamber, were clearly frustrated. “Kevin McCarthy has now shown more anger about making child care affordable than he has about the insurrection on January 6th,” tweeted Rep. Mondaire Jones of New York. Others shouted at McCarthy at other points and jeered him for making messy what should have been a major win for Biden and his Democrats.

But, in perhaps a strategic error, McCarthy’s delay now puts the vote at the start of the day and denied the bill the epithet of being “passed in the middle of the night.”

McCarthy also repeated all of the GOP’s greatest hits, alleging Democrats want to “Defund the Police” and are soft on China for its role in COVID-19 pandemic, seek to take away private property and embrace a socialist posture. He plucked the strings of the culture wars. “I don’t think the Taliban cared about the pronouns in the military,” he sneered. He recounted the story of allegations of the sexual assault of a female student by a gender-fluid student at a suburban D.C. school. Fears of unsafe neighborhoods for kids, unrelenting immigrants crossing the Southern border illegally and wanton joblessness lurk behind every corner in McCarthy’s telling.

“Every American city is set to become a border city and a sanctuary city,” McCarthy said as the clock ticked past 2 a.m. It was fear-mongering 101, and it is shaping up to be a roadmap for the GOP heading into the midterm elections. It worked in Virginia two weeks ago as Republicans defeated Democrat Terry McAuliffe in the race for governor. As McCarthy was just under the six-hour mark, he invoked those results, noting two Democratic incumbents hail from Virginia districts that voted for Republican Glenn Youngkin by margins of 8 and 11 points.

But back here in Washington, McCarthy was working at proving himself fit for the top job, even if his facts were at times badly inaccurate. He inflated the total cost of the bill to $5 trillion, even as the scorekeepers at the Congressional Budget Office pegged it at $1.68 trillion over a decade. He treated Biden’s Justice Department as out-of-control spies on parents, the IRS as a force to knock on every American’s door and Biden’s one-party control of Washington as a threat to U.S. democracy.

“We will not allow America to fall further behind as the Biden Administration has,” McCarthy promised if Republicans retake the majority next year. “I think you’re fighting to make this a socialist country,” McCarthy told the Democrats.

Because of his privilege as the Republican Leader, he is one of three House lawmakers who can speak without a check on his time. It’s the House version of the Senate filibuster, although deployed far less frequently and unlike its Senate sibling, can’t be shut down by anyone. The stunt is unlikely to derail Biden’s Build Back Better Act, although that fact didn’t stop him from taking advantage of every opportunity afforded him in what is known on the Hill as a Magic Minute. That, in turn, allowed him to deliver an occasionally meandering critique of the spending bill with a history of Reconstruction, the Cold War and Reaganism. He gave a mini-history of Washington Crossing the Delaware, the portrait of America’s first President that hangs (as a reproduction) in McCarthy’s conference room. And he seemed to delight in angering Democrats who occasionally heckled him before finally realizing McCarthy was settling in for a long delay tactic.

An hour later, he noted that most Democrats had gone home. “I don’t know if they think they left, I would stop,” McCarthy said. “I’m not talking to them. I’m talking to the American people.”

Finally, McCarthy wrapped up just after 5 a.m. In a factoid that only Congress nerds will appreciate, McCarthy surpassed Pelosi’s legendary Magic Minute, which went eight hours in 2018, until this morning widely considered a record for a House speech.

It’s impossible to have a speech of this length and expect it all to make sense. And McCarthy has never been known as a skilled orator; his success has been in fundraising and managing friendships. So McCarthy can be excused for some of the words making less than perfect sense. Even the most generous listeners would have trouble tracing his desire to have been in Tiananmen Square during the violent 1989 crackdown on protests and in Germany for the fall of the Berlin Wall. Add to that McCarthy’s disclosure that he might have a little headache during his overnight talk-a-thon from his third COVID-19 booster shot.

But he also gave his critics plenty of fodder. For instance, he said he got his first vaccination on Jan. 6, the day Trump riled up a crowd on the National Mall to overturn the results of the 2020 presidential race. McCarthy, who supported Trump’s efforts to undermine the results, said he had had a bad reaction to the jab. “I got the chills. I got the shakes—for a lot of reasons,” McCarthy said in a very tone-deaf recollection on a day that saw a violent mob storm the Capitol.

But ultimately, the evening and into the morning was about proving McCarthy is up to the top job in the House should the Republicans prevail in 11 months. He noted that in his time in the majority, the GOP never lost a procedural motion—an insider boast as an organizer. And he was already announcing prospective rules changes. “No more proxy voting. You’re going to have to show up to vote,” he said. He announced he would scrap the metal detectors outside the House chamber, a second layer of security put in place after Jan. 6. He also hinted that he would strip several Democrats from all committees. “Don’t worry, there will be many more (without committee assignments) next time,” McCarthy said.

If that doesn’t sound Trumpian to you, you’ve not been paying attention to Trump’s capacity for retribution. But McCarthy would also do well to remember this Trump trait: his loyalty is, at best, wobbly. McCarthy spent four years in the service of Trump but could still find his quest for the House gavel unsuccessful if the former President wakes up one day with another idea. 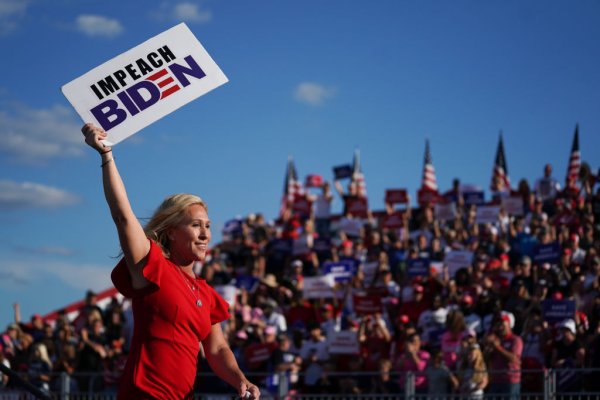 Marjorie Taylor Greene Isn't a Fluke—She Might Be the Future
Next Up: Editor's Pick