Marjorie Taylor Greene Isn't a Fluke—She Might Be the Future

It’s mighty tempting to treat Rep. Marjorie Taylor Greene as an aberration in Washington, someone so far out of the American political mainstream that she can and should be ignored. That would be a mistake—for both major political parties.

Greene, a Georgia Republican whose views are so fringe that GOP Leadership stripped her of her committee assignments just a month after she arrived in Congress this year, represents a not-insignificant slice of the current mood on the right. She slings grievance better than anyone in the Nats’ bullpen throws pitches. She knows just how to trigger liberals with outrageous rhetoric that ripens in the QAnon realm of conspiracy theories and misinformation. She is as unmasked, unvaccinated and uncivil as she tears through Capitol Hill, and wholly unapologetic.

But step inside her brand of professional outrage and performance art and you are simultaneously inside a living autopsy of the current Republican Party and its reanimation. For a little more than an hour last night, Greene hopped on the line during a virtual town hall with constituents and fans to hurl some of her fringiest ideas, dog whistles and cherry-picked facts to her base.

The evening was a masterclass of a Trumpian understudy. She called COVID-19 a “bioweapon” and said Biden’s “authoritarian” mandate requiring vaccinations at companies of 100 people or more was on hold, even though the situation is far less clear than that. In a troll of transgender individuals who are expecting, she said, “The only people that are pregnant are women.” She wrongly asserted that Biden’s Justice Department still believes parents are “domestic terrorists” and that Republicans proposed credible members of the committee charged with investigating the Jan. 6 insurrection, and not two members who were openly hostile to its work. She called the protesters who stormed the Capitol “innocent people who simply got legal permits to protest on Jan. 6.”

Greene said Biden’s looming infrastructure plan would amount to “a communist takeover of America” and would teach racism on college campuses. “It’s going to bankrupt the country, plain and simple,” Greene predicted, adding it probably would cost some $5 trillion. (Democratic drafters have put the number at $1.75 trillion and are waiting for a ruling from the Congressional Budget Office.) The bill was “a payoff to the communist social elite,” she said. “You know who these people are: big-tech executives, these are the companies that censored you and kicked you off Facebook, kicked you off social media and silenced your voice.” This, of course, would be news to the suspected commies who made billions on social media.

But it was one of the questions she asked callers to answer during the session that perhaps sheds the clearest light on why Greene must be taken seriously by her colleagues. “Do you support Congresswoman Greene’s stance that the 13 House Republicans who voted for Biden’s communist infrastructure bill betrayed their party?” she asked.

Republicans at the Capitol try to treat Greene the way Democrats handled the likes of Reps. Tulsi Gabbard or Dennis Kucinich—as a quirky outlier who doesn’t represent the spine of the political party they call home. But where those fringy Democrats largely coexisted with their mainstream comrades, Greene isn’t content to be the corollary who spouts off and is shown the door. She is actively looking to punish her Republican colleagues who dared to back a bipartisan infrastructure bill that ex-President Donald Trump tried like the dickens to kill.

Right before she fired up her conference call platform, Greene told reporters that unless Minority Leader Kevin McCarthy punishes the infrastructure-backing Republicans, she might not find her way to supporting McCarthy’s bid to become Speaker someday. Purity tests inside the party will make it more homogenous but also one with fewer members, something McCarthy knows as he weighs his own political ambitions against the broader party-making efforts he’s nursing.

Democrats, meanwhile, have largely taken to mocking Greene as a looney tunes character and an avatar for the modern GOP. They ran that play in 2018 and made unexpected gains during those midterms by casting every Republican candidate as Trump Lite who should be feared.

But Greene isn’t Trump. She may have learned from his playbook, but it’s one thing to test jabs from afar and another to be in the ring. Greene has been a frequent instigator of flaps with Democrats on the Hill. It at times can feel unrelenting. One of her staffers demanded that Rep. Eric Swalwell remove his mask, to which he replied with profanity. Weeks later, Greene accused Swalwell of having an affair with “his Chinese spy girlfriend.” On another occasion, Greene heckled a Democratic press conference, drawing the usually steady Debbie Dingell to tell her colleague from across the aisle to practice the civility she says she learns in church on Sunday. (Greene’s chief of staff left the next day and announced he was going to work to elect more politicians in her style.)

Greene isn’t here to play nicely. She seems to be perpetually documenting moments to leverage for some social media strike. She has now racked up more than $60,000 in fines for refusing to wear a mask while at the Capitol, and she announced last night that she was not vaccinated.

While her alliance with the likes of Trump is useful to scare Democratic donors, it misses this fact: Greene actually might be the most accurate representation of one—albeit narrow—slice of what the contemporary conservative movement represents. She may not be what D.C. is used to hearing at the Capitol Hill Club, the members-only clubhouse of the GOP elite, but she may have her finger on the pulse of what animates the grassroots. The famous line ab​​out CPAC being the cantina scene from Star Wars suddenly feels like it needs a digital update, too.

That’s the question both parties need to investigate: Is Greene just a hangover from the Trump era, or is she, in fact, destined to play a part in the future of the Republican Party? We’ve seen flashes of this rising star before from the outside. She’s as plain-spoken as Pat Buchanan was when he positioned himself as the heir to Ronald Reagan and won the New Hampshire primary in 1996. She’s as indifferent to facts as Sarah Palin, whose political power after the failed 2008 vice presidential bid helped give tailwinds to the Tea Party revolution of 2010. And Greene is as brazen as Trump when it comes to savoring opponents’ pain as personal victory.

When it comes to opposing Biden, Greene’s four articles of impeachment are simply parked in wait for a Republican majority in the House. If Republicans take the majority next year as many in both parties expect, she could be a position more than anyone holding a gavel to shape the public’s opinion. In that reality, Greene should not be discounted, no matter how far outside the historical mainstream she may seem. After all, vanquishing a common political enemy was enough to secure Joe Biden the nomination last year. For Republicans, Biden is now that foe. 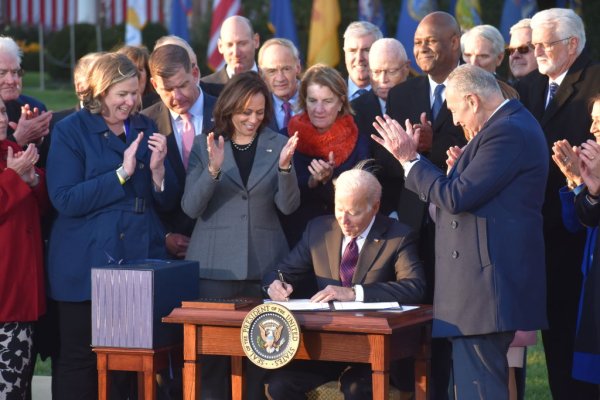 In Washington, ‘Bipartisan’ Can Mean a Lot of Things
Next Up: Editor's Pick