What is Vegan Wine? An Essential Guide for Plant-Based Wine Lists

Outspoken Italian winery owner Sebastiano Cassia Castiglioni is a wine pioneer in the plant-based food movement. He turned vegetarian at age 15, eventually went fully vegan, and more than a decade ago extended that commitment to Querciabella, his now-organic and biodynamic Chianti Classico family estate.

“I didn’t want to be part of the way conventional agriculture devastates the environment and abuses animals,” he says. “We removed all animal products from every aspect of our winemaking process, including the vineyards. You don’t need them to make great wine.” The proof is in his reds and pricy white, which have steadily become livelier, more vibrant, and more intense.

As everyone knows, the plant-based trend is booming. In the U.S., sales of vegan groceries, such as replacements for milk and meat, grew 27% from 2020 to 2021, according to data from Spins, a wellness-focused technology company, and the nonprofit Good Food Institute. U.K. supermarket chain Sainsbury’s recent Future of Food report predicted that fully 25% of the country’s population will be vegan or vegetarian by 2025.

Health concerns are one reason, eco-consciousness is another. The U.K.’s Vegan Society says the diet will reduce your food carbon footprint by up to 50%. In May, one of New York’s top restaurants, Eleven Madison Park, announced that its food menu would go almost entirely vegan.

You may be wondering how wines fit into a philosophy that opposes eating meat, dairy, and eggs and tries to avoid the exploitation of animals. It’s just fermented grape juice, right? Isn’t that automatically vegan? Well, not necessarily.

Some winemakers still use traditional animal-derived “fining” agents such as egg whites, gelatin, or casein (derived from milk) to clarify the liquid, reduce bitterness, or bind and extract excess tannins in red wines, leaving behind softer ones. The agents are removed before bottling, but their use is still a vegan no-no.

Today, animal-free alternatives, such as bentonite, a form of clay, are more commonly used. But it’s hard to identify which wines use what, since neither the EU nor the U.S. requires ingredients or winemaking processes to be listed on labels. Just because a wine is organic, biodynamic, natural, or kosher doesn’t mean it’s also vegan.

One hint: If the front or back label says the wine is unfined, it’s vegan friendly—if you define vegan as simply not introducing animal products into the wine itself.

Helpfully, major retailers in the U.K., like Bibendum, now publish the names of these vegan wines online. The Barnivore Vegan Alcohol Directory lists more than 5,000, but it isn’t always up to date.

Increasing interest from wine drinkers has inspired wineries to certify their wines as vegan, entitling them to put an official trademark on their back labels. Larry Stone, co-founder of Lingua Franca, says the top Oregon winery did it “because it’s important to so many people to verify our wines have no animal by-products.” (All those in the list below are certified.)

But there’s a big catch to all this. The definition of vegan wine is blurry, with certification covering only what happens to wines after the grapes have been harvested. The European Vegetarian Union doesn’t give its V-label to bottled wines sealed with beeswax. But it does certify producers that fertilize vines with animal manure, something that those embracing a wider vegan philosophy than just dietary choices object to. Such traditional biodynamic practices, such as burying a cow horn filled with manure, are considered non-vegan.

When in doubt, consult a winery’s website or call it for further information.

A few restaurants are beginning to identify vegan-friendly wines on their lists with some sort of symbol (such as a green leaf, or sometimes just the letters V or Veg). Gautier Soho in London, which transitioned to an all-vegan menu in June, offers only vegan wines.

New York’s Eleven Madison Park, which drew wide attention for the plant-based menu it debuted in June, doesn’t quite describe itself as “vegan.” The wine list, which features several Bordeaux châteaux that fine with egg whites, such as Château d’Armailhac, is decidedly not vegan. Wine director Watson Brown says his goal is not to adjust the wine program but to offer the highest quality wines possible; he says many are inherently vegan but not necessarily labeled so. When consumers request a vegan wine, sommeliers steer guests to regions and producers that don’t fine their wines.

You don’t have to learn a new set of rules to match vegan wine and food. Mushroom risotto works just as well with a vegan pinot noir as with a conventional one.

There are two main principles. Since vegan food doesn’t include butter or animal fat, wines with less oak, alcohol, and tannin tend to match best. Texture and cooking methods are all-important. Roasted beets or grilled cabbage both taste great with red wines.

NV Champagne Leclerc-Briant Brut Reserve
This revived Champagne house, noted for such quirky innovations as aging Champagnes 60 meters below sea level and maturing wine in a barrel lined with gold, has a long biodynamic history. This non-vintage cuvée is bold and intense, with aromas of golden delicious apples and fresh croissants.

2017 Domaine Wachau Riesling Terrassen Federspiel
An entry-level white from one of Austria’s top large estates, this bright, fresh, dry Riesling exudes a zesty lime and peachy fruitiness. It makes a top partner to a cauliflower curry.

2019 CVNE Organic Rioja
This new wine from an historic Spanish producer has bold fruit flavors and a mineral finish, ideal with a bean or lentil chili.

2018 Lingua Franca Avni Pinot Noir
The winery’s pinots have been vegan since the second vintage, 2017. This one is fragrant and juicy—especially delicious with earthy mushroom dishes or roasted beets.

2019 Vietti Barbera d’Asti
Loaded with fruit and energy, this bright, tangy red from a top producer has the kind of acidity that goes well with tomatoes. Try this one with vegan pizza.

2016 Avignonesi Vino Nobile di Montepulciano
Savory, rich, and suave, with dark berry and tobacco aromas, this wine comes from a Tuscan estate that is also certified as biodynamic. It’s a good match for baked eggplant. 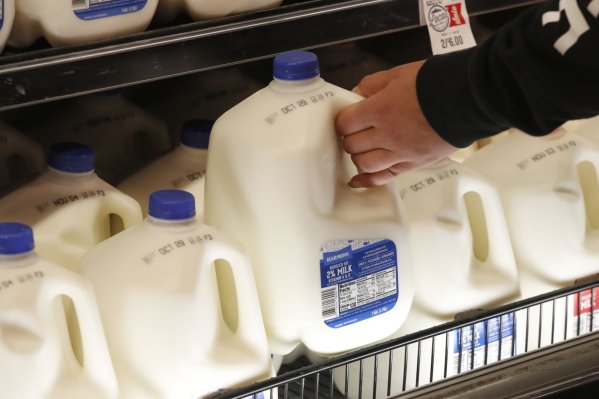 Think Milk Is Expensive? It's Cost May Get Even Higher
Next Up: Editor's Pick