As More Companies Make Net-Zero Pledges, Some Aren’t as Good as They Sound

Activists from Extinction Rebellion stage a protest outside corporate offices of oil company Shell demanding an end to extraction of fossil fuels and reparations for the communities affected by environmental pollution caused by oil spills in the Niger Delta, on Sept. 8 2020 in London, England.
WIktor Szymanowicz—NurPhoto/Getty Images
By Eloise Barry

At COP26, the U.N. climate summit in Glasgow, governments and businesses put forward ambitious-sounding plans to de-carbonize. But a closer look beneath the surface shows many corporate “net-zero” plans are not nearly as good as they sound.

The Net Zero Tracker, compiled by a team of non-profit organizations and research labs, assesses companies’ environmental commitments based on information made publicly available by businesses themselves. It recently found that 622 of the 2,000 largest publicly-traded companies in the world by revenue have technically committed to a net-zero strategy. However, the Net Zero Tracker team also found that the actual policies of many of these companies undermine any real change at achieving zero-carbon operations. Often, that’s because they do not count emissions produced by their supply chains (which can be significant) or because they depend on unreliable or unproven strategies to offset their carbon production.

To understand the first of these, you need to understand the standard framework to measure emissions, called the Greenhouse Gas Protocol, which defines three broad categories of emissions associated with business operations: Scope 1 covers direct emissions from owned or controlled sources, such as company delivery trucks. Scope 2 covers indirect emissions—say, the generation of purchased electricity, steam, heating and cooling consumed by a company. Scope 3 includes all other indirect emissions that occur in a company’s value chain, anything from supplier waste to the use of the products it sells.

If a company does not include Scope 3 emissions in its carbon accounting, it’s essentially useless. For example, Walmart, the world’s largest retailer, has an official strategy to reach zero emissions by 2040. Yet, its plan excludes Scope 3 emissions—despite the fact that they make up 95% of the company’s emissions, according to the company.

“A lot of businesses and investors are setting these kinds of targets, and they’re doing it, arguably, for PR reasons,” says Thomas Hale, an Oxford University professor and contributor to the Net Zero Tracker. It can often be a form of greenwashing: a marketing strategy to convince the public that an organization’s products, aims and policies are environmentally friendly, when they are often far from it.

A Walmart spokesperson said in an emailed statement that the company was working with its suppliers on a project to “avoid a gigaton of greenhouse gas emissions by 2030.” More than 3,100 of Walmart’s suppliers have formally signed onto the project and “avoided a cumulative total of more than 416MMT of CO2e since the program’s inception in 2017,” the spokesperson said.

Read more: The World’s Top Carbon Emitters Now All Have Net Zero Pledges. Most of Them Are Too Vague

Saudi Aramco, the world’s largest oil exporter, and one of the biggest companies on the Net Zero Tracker, also did not include Scope 3 emissions in the 2050 net-zero pledge it announced last month. “Scope 3 is the responsibility of end users, regulators, policymakers and governments around the world,” Aramco CEO Amin Nasser said Oct. 23 at the Saudi Green Initiative conference. Aramco did not respond to a request for comment for this article.

Even companies that do include Scope 3 emissions sometimes do not fully account for them. For example, another oil major—and the second-largest company on the Net Zero Tracker list—Royal Dutch Shell, has a net-zero plan which includes Scope 3 emissions from the fuel it sells, but does not include Scope 3 emissions from its non-energy products, like chemicals, lubricants, and bitumen. A spokesperson for the company (soon to be known as Shell) said it plans to become a net-zero emissions energy company by 2050. “Achieving this target means we will be net-zero across all of our operations in the future, including the manufacturing of non-energy products such as lubricants and chemicals.”

Then there are the issues with offsetting. Many companies attempt to continue doing business as usual and then offsetting their carbon footprint by paying third parties to plant trees that, in theory, sequester carbon, or investing in emerging carbon-capture-and-storage technologies. But these both have their flaws.

A report released in October by campaigning group Friends of the Earth argues that “nature-based solutions” to offset carbon emissions are founded on a flawed assumption that it is possible to trade off harm in one place with good intentions elsewhere. Each habitat is unique and irreplaceable, the report argues, and forms of short-term carbon storage like trees or peatlands are inadequate substitutes for leaving fossil fuels in the ground—a more permanent form of carbon sequestration. Some studies have found that planting nonnative trees in Canada and China on a large scale, for example, has disturbed natural ecosystems, worsened wildfires and depleted groundwater levels.

Moreover, offsetting is hard to regulate. As part of Shell’s “drive CO2 neutral” scheme, customers can choose to pay extra when filling their tanks. The company uses the extra money to buy carbon credits which offset the emissions produced. But in August, the Netherlands’ advertising watchdog ruled that Shell’s advertising campaign was misleading, because it could not prove the scheme fully offset emissions. And then, an investigation by Greenpeace and Source Material last month revealed that two of Shell’s most prominent offsetting projects, which rely on reforesting initiatives in Peru, Indonesia and Scotland, do not demonstrate a clear benefit to the climate.

Contradictions like these can also be found within the financial system that supports the fossil fuel and other polluting industries. On the third day of COP26, a coalition of 450 financial firms—including such influential names like J.P. Morgan Chase, Goldman Sachs, and Santander—pledged $130 trillion of private capital to invest in reaching global net-zero by 2050. But many of these financial companies don’t appear to be cleaning up their own houses. J.P. Morgan Chase last month announced it would make its lending and investment portfolio net-zero by 2050—however, according to Net Zero Tracker, the bank’s pledge only partially covers Scope 3 emissions. Santander’s publicly available plan, according to the Net Zero Tracker, is incomplete, as it does not make clear how proposed measures will reduce CO2 emissions, and it lacks formal accountability strategies.

Goldman Sachs has publicly committed to reaching net-zero supply chain emissions by 2030 and financed emissions by 2050, but it relies on offsetting to reach its goals. The bank’s CEO David Solomon has previously said Goldman Sachs would set interim business-related climate targets by the end of 2021, a spokesperson said.

A spokesperson for J.P. Morgan said in an emailed statement that it was setting carbon reduction targets for “key sectors” of its financing portfolio as part of its “Paris-aligned strategy.” Steps it is taking include “Scope 3 targets for Oil and Gas, and Auto Manufacturing; announcing a $2.5 trillion, 10-year sustainable financing target to support the development and scaling of the innovative technologies that we need to get the world on a path to net zero, and achieving carbon neutrality in our operations every year starting in 2020,” the statement said.

A Santander spokesperson said in an emailed statement: “Santander’s climate finance report provides detailed disclosures regarding our climate targets and strategy. We are committed to playing our part in achieving the objectives of the Paris agreement and will continue to provide regular, transparent updates on our progress.”

As companies scramble to declare their commitments to a net-zero future, greenwashing strategies will likelt become more commonplace as the global economy moves towards green energy, finance, and tech—and may be harder to detect. What might help to make it easier to identify them is a new U.N. group to police net-zero commitments. U.N. Secretary-General Antonio Guterres said last week at the COP26 summit that the group would be making recommendations to him next year.

“We need to hold each other accountable—governments, non-state actors and civil society.” Guterres said on Nov. 11. “Only together can we keep 1.5 degrees within reach and the equitable and resilient world we need.” 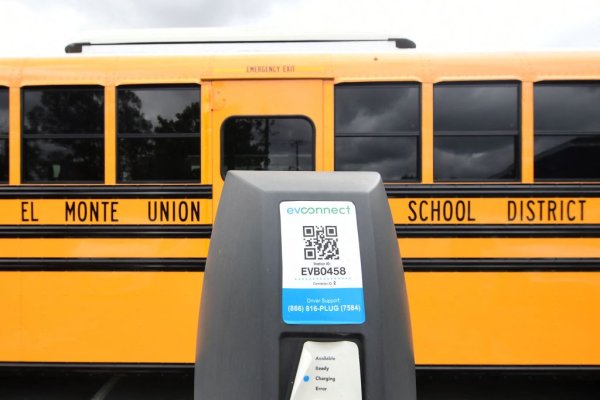 The Infrastructure Plan Is Rolling Out Electric School Buses
Next Up: Editor's Pick