The Best Way to Save Nature? More Nature

A project to build a network of salt marshes, grasslands and lagoons on Wallasea Island on England’s eastern coast is due for completion in October
Peter Macdiarmid—Getty Images
By By Ciara Nugent / Wallasea Island, U.K.

Avocets, terns and gulls swoop down onto Wallasea Island on England’s eastern coast, searching for food between blades of grass ruffled by the summer sea breeze. Aside from the wind, and the odd chirp or squawk, it’s quiet—the kind of peaceful scene that seems like it’s been going on for centuries. Yet five years ago, these wetlands didn’t exist.

The mud the birds have landed on once lay under the streets of central London. In 2015, as part of a railway project, a construction crew scooped more than 3 million metric tons of dirt out from beneath the capital and piled it onto farmland on the coastline of the county of Essex, 50 miles east. In summer 2019, a crane hoisted old heavy machinery out of the water, removing the last vestiges of human interference.

Wallasea is the largest restored coastal wetland in Europe, an exemplar of a growing movement to “rewild” land and return it to the way it was before humans began exploiting it millennia ago. It’s good for the birds. But it’s also increasingly understood as crucial for ensuring a world hospitable to people. As water sloshes in and out of Wallasea’s restored mudflats and salt marshes, carbon dioxide that could otherwise escape into the atmosphere and contribute to global warming gets buried. “Bits of decomposing leaves and seaweed come down rivers to the coast,” explains Rob Field, a senior conservation scientist at the Royal Society for the Protection of Birds, which runs Wallasea. “When it gets to the [slow-flowing] salt marshes, the carbon falls out of suspension and gets stored there, in the thick, gloopy mud.” Ecologists say coastal wetlands like these are capable of trapping carbon up to 40 times faster per hectare than tropical rain forest. But over the past 400 years, farmland, coastal development and rising sea levels have combined to destroy 91% of wetland habitats on the Essex coast. Worldwide, 35% of global wetlands were destroyed from 1975 to 2015, according to the U.N.

Scientists say it’s too late to prevent catastrophic climate change by only reducing greenhouse-gas emissions. As well as rapidly phasing out fossil fuels, the world also needs to deploy so-called negative-emissions technologies to draw down large amounts of the carbon dioxide already in the atmosphere. Many believe that nature restoration is the cheapest and simplest way to do it. Other options, including machines that catch carbon as it is being emitted by power plants or suck carbon out of the atmosphere to store it underground, need research, money and time to mature before they can be used on a large scale. For that reason, most Intergovernmental Panel on Climate Change pathways for limiting warming to 1.5°C above preindustrial levels rely on forestry and better land management to make up the bulk of carbon drawdown over the next 30 years. To save the planet, we may need to give some of it back to nature.

In Europe, home to some of the most densely populated land in the world, and where true wilderness has become almost nonexistent, the idea of bringing nature back while also fighting climate change has captured the imagination. Dozens of privately and publicly funded rewilding projects have popped up across the continent. Europeans are reviving coastal habitats like Wallasea in the U.K., reversing the drainage of peatland bogs in Germany and replanting forests in the Scottish Highlands. The projects not only sequester carbon but also boost biodiversity and help the land adapt to the changing climate by preventing floods and wildfires.

Advocates of nature restoration say those benefits give rewilding an edge over simple tree planting, which has been popular with European governments for decades. From 2005 to 2015, Europe’s forest cover grew by the equivalent of 1,900 football fields every day, as the E.U. spent several billion euros to fund tree planting, often on farmland that had been abandoned because of changing agricultural practices in places like France and Italy. Some of that was reforestation, using native species to restore forests to what they were before, but much of it was so-called afforestation, the planting of many of one species of tree where there was none before, in regular lines. Many afforested trees are regularly cut down and used to produce timber, paper or biofuel.

Meanwhile, other landscapes have been neglected. “I think politicians like planting trees because it’s a very clear, simple action,” says Timon Rutten, head of enterprise at Rewilding Europe, a Netherlands-based NGO that oversees nature-restoration schemes from Portugal to Bulgaria. “But peatlands, wetlands and grasslands are just as good or sometimes even better at storing carbon.”

Northern European countries shelter large expanses of peatlands—sometimes called moors, bogs or mires—that perhaps offer the greatest opportunity for natural climate mitigation. The plants that grow on the surface of peatlands sequester, or absorb, carbon dioxide as they grow. When they die, the decomposing plants do not leach carbon back into the atmosphere but get buried in waterlogged bogs, compressing into a new layer of peat. These habitats cover about 3% of the globe but contain more stored carbon than all other kinds of vegetation on earth combined. They sequester 370 million metric tons of CO₂ per year. But 15% of the world’s peatlands have been drained for agricultural use, or so that their peat could be burned to power generators, emitting carbon dioxide in the process. The dried-out peatland that’s left behind then releases stored carbon into the atmosphere; peatlands now account for almost 6% of annual global human-caused carbon emissions. E.U.-funded rewilding projects in Finland, the U.K. and Germany are rewetting peatlands to turn them back into carbon sinks.

Rewilding advocates are competing for investment with more modern negative-emissions technologies. Dozens of companies are developing carbon capture and storage (CCS) technology, in which machines use chemical processes to filter CO₂ out of the air. The gas is then used to make products or stored underground, removing it from the atmosphere.

Swiss startup Climeworks, for example, scrubs CO₂ from the air at plants in Italy, Switzerland and Iceland, at a cost of $500 to $600 per metric ton of CO₂. It is then sold for use in greenhouses, soda manufacturing and biofuel production, or stored in rocks deep underground.

But most IPCC plans for preventing more than 1.5°C of warming include a different kind of CCS: bioenergy and carbon capture and storage (BECCS), which should account for the majority of negative emissions by the end of the century. BECCS power stations burn trees and plants—which have sequestered carbon while growing—to produce electricity, then trap the resulting CO₂ emissions. The U.K. government has invested $32 million in domestic BECCS projects, including the first pilot program to launch in the E.U., the Drax power station in the U.K., which went online in February.

Currently, these high-tech methods for removing carbon from the atmosphere are expensive and so have limited reach. Rewilding, at least at the moment, is cheaper and more proven. Peatland restoration, for example, can trap a metric ton of CO₂ per year for about $16.

Despite the low cost, however, there are obstacles to rewilding on a meaningful scale. “There’s a limited amount of land that we can do restoration on,” says Simon Lewis, a professor of global change science at University College London. The mudflats and salt marshes at Wallasea currently bury around 1,200 metric tons of CO₂ a year—the equivalent of the per capita emissions of only around 200 Brits in 2018. The U.K. would need to rewild wetlands about 10 times the size of the entire country’s land area to zero out national carbon emissions.

Large-scale nature restoration also doesn’t yet have real political support. The British government’s current rewilding plans include just 500,000 hectares of land—0.2% of the country’s total surface area—over the next 25 years. And privately funded rewilding schemes often come up against resistance; one of the largest such projects, Summit to Sea, which calls for the restoration of eco­systems on 10,000 hectares of farmland in Wales, has attracted fierce opposition from local communities and agricultural groups, which fear no longer being able to use the land for their livelihoods. A local politician has described the project as “urban values being forced on a rural Welsh area” and the Welsh Farmers’ Union is calling for it to be cancelled.

At Wallasea, the illusion of unspoiled nature was punctured on the July morning TIME visited by a plume of dark gray smoke above the island’s north edge. The British military uses nearby land to dispose of expired ammunition, explains site manager Rachel Fancy. “We get a lot of big bangs out here.”

Nevertheless, Fancy says she expects humans will find more ways to coexist with nature in the coming decades, especially as climate change threatens both. Rewilding doesn’t just sequester carbon—it also reduces the risk of floods and wildfires, both of which are becoming more frequent on a warming planet. Over the next 100 years, Wallasea’s salt marshes should creep up the sand dunes and act as a natural flood defense, protecting nearby homes and farmland even as man-made walls are overwhelmed by rising sea levels and increased storm surges.

Wallasea is doing its bit to stave off the worst of that climate breakdown, as it buries carbon amid samphire and sea lavender. Meanwhile, the birds can relax here. The weather is fine, for now. 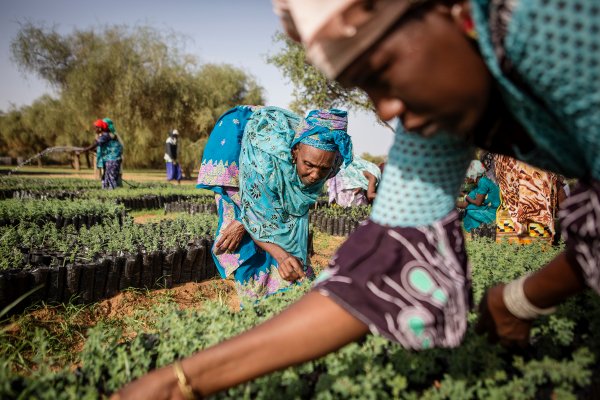 How a Wall of Trees Could Help Curb Climate Change in Africa
Next Up: Editor's Pick