From the New York Public Library, an engraving from a painting depicting members of the Virginia Company of landing at Jamestown. Their larger ships can be seen anchored off of the coast while smaller boats are being used to bring men ashore; American Indians are assisting the men that are gathered on the shore.
Smith Collection/Gado/Getty Images
By James Horn

During the late sixteenth century, a great American Indian chiefdom arose along the mid-Atlantic coast of North America. Named Tsenacommacah (densely inhabited land) by the peoples who lived along the rivers and shores of the Chesapeake Bay, the chiefdom stretched from the James River in the south to the Potomac River in the north and inland as far as the rolling hills of the piedmont.

Pieced together by two of the most powerful chiefs of the era, Powhatan and his brother Opechancanough, the chiefdom was constructed as a means of defending their territories from invasions by European colonizers. And beginning with the first series of wars in British America that took place in Virginia following the arrival of the English at Jamestown in 1607, its warriors would be engaged in hostilities for much of the first half of the century, led throughout by Opechancanough.

Initially, relations between the English and Powhatans (as the Indians were called) were friendly. Both sides were interested in trade—and the English were largely dependent on the Powhatans for food. But within a few years, relations had completely broken down. Tired of ever-increasing demands for food from the English, Powhatan warriors began raids on Jamestown and several small garrisons that had recently been established along the James River. These attacks quickly escalated into a full-scale war that nearly wiped out the English in 1610 before hundreds of well-armed soldiers, veterans of wars in Europe, arrived and carried out devastating counter-attacks.

A 16th century painting of a Chesapeake Bay warrior by John White; this painting was adapted to represent Opechancanough in John Smith's "General History of Virginia" (1624).
Public Domain

Taking over from his brother, Opechancanough established himself as the chiefdom’s de facto ruler and began planning a long-term strategy to expel the English from his territories.

Opechancanough’s past experience with Europeans—he had been taken from Virginia by Spanish explorers while still a youth and spent ten years living in Spain and Spanish America—had taught him that there could be no accommodation with invaders on terms that would adequately recognize the Powhatans’ way of life, values, and beliefs.

As hundreds flooded into the colony taking up lands all along the James River Valley, he feigned friendship with the newcomers, biding his time for the right moment to put his plan into action. That plan involved a simultaneous attack that would be so overwhelming that the English would be unable to send warnings to other plantations.

The attack was launched on the morning of March 22, 1622, led by elite forces from Opechancanough’s own people, the Pamunkeys. They were joined by warriors of other James River chiefdoms who had suffered greatly in the first war—the Powhatans, Arrohattocks, Appomattocs, Weyanocks, Chickahominies, Quiyoughcohannocks, Warrascoyacks, and Nansemonds. Supported furthermore by Kiskiacks from the York River and the Rappahannocks, as well as several hundred mercenaries, the total number of warriors was likely somewhere between 1,400 and 1,600.

Along the James River, warriors abruptly fell upon the English “not sparing either age or sex, man, woman, or child,” according to a contemporary English account. 347 people were clubbed, hacked, stabbed or shot to death with their own tools and weapons, wrote Edward Waterhouse, a Company officeholder, wrote in a pamphlet shortly afterwards. So sudden was the attack, Waterhouse wrote, that, “few or none discerned the weapon or blow that brought them to destruction… they slew many of our people then at their several works and husbandries in the fields, and [outside] their houses, some in planting corn and tobacco, some in gardening, some in making brick, building, sawing, and other kinds of husbandry.”

Following the first waves of attacks, larger running groups of warriors, anywhere from fifty to several hundred, joined the fighting to finish off survivors and burn settlements. Applying tactics used by the English in the first war, warriors destroyed buildings, equipment, and livestock in attacks on property as well as people.

Read more: The Thanksgiving Tale We Tell Is a Harmful Lie. As a Native American, I’ve Found a Better Way to Celebrate the Holiday

By mid-morning, a bird’s eye view would have shown sheets of flames consuming houses and out-buildings and dense columns of smoke billowing up from burning plantations, wharves, and boats. Dozens of men would have been seen grappling in desperate hand-to-hand combat and scores of Indians running towards the fighting, throwing themselves upon the English and killing them in their homes, fields and yards. The screams of the injured and dying would have been heard mixed with the yells of warriors, shouts of alarm from householders and servants, and the crack of musket fire and clash of steel.

Opechancanough did not expect a single day’s attack, even such a well-executed one, would succeed in expelling the English straight away. A general withdrawal would probably take a few months and possibly much longer. At no point did he consider seriously the possibility of living alongside the English as a separate but equal people; neither did he believe in a policy of containment, confining the English in Jamestown and other specific places. War was a contest for mastery of the land in which the winner would take all.

Edward Waterhouse blamed the massive attack on the Indians’ wickedness and thralldom to “the Devil,” but he also referenced “the daily fear that possessed them,” that in time the English “would dispossess them” of their country. Opechancanough’s strategy was therefore based on achieving a victory so crushing that the English could not possibly recover. By destroying public works, plantations, and cutting off food supplies he anticipated the English would eventually become so weakened and demoralized they would either fall victim to his warriors or be forced to abandon the colony.

Ultimately, the great attack and succeeding long years of hostilities against the English were in vain. Opechancanough could not save his people or his chiefdom from the sheer numbers of arrivals who flooded into the colony during the 1630s and 1640s. Following his capture and death in 1646, shot in the back by a soldier at Jamestown, resistance was broken and the once great Powhatan chiefdom collapsed. Yet Opechancanough’s resistance to subjection stalled English expansion in Virginia and he came closer than any of his peers to defeating European colonizers and ridding them from his lands. He was, as he once described himself, “a great Captain, and did always fight.”

Continuing the fight until he was nearly a hundred years old, he was undoubtedly one of the greatest military leaders in early American history.

Adapted from A Brave and Cunning Prince: The Great Chief Opechancanough and the War for America by James Horn. Copyright © 2021. Available from Basic Books, an imprint of Hachette Book Group, Inc. 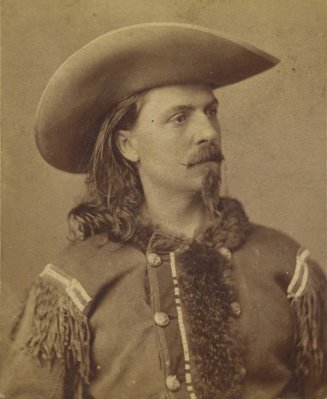 What the True Story of Buffalo Bill Reveals About the Myth of the Wild West
Next Up: Editor's Pick