The Full Story of Pocahontas Is Rarely Told. Here's What We're Missing

A portrait of Pocahontas, 1616.
Getty Images
By Karen Ordahl Kupperman

We all think we know Pocahontas, but her real story is very different from the popular image. Pocahontas was an extremely talented and lively 10-year-old girl when Jamestown was founded in 1607. She was the daughter of the Great Powhatan, who ruled over numerous client tribes in the Chesapeake, the region the Powhatans called Tsenacomaca, and he selected her for a special role because of her intelligence and personality. Captain John Smith said her “wit, and spirit” made her stand out.

Smith first met Pocahontas when he was captured a few weeks after the first colonists’ arrival in the area. He was brought before the Great Powhatan, where he encountered men with clubs ready, he thought, to beat out his brains. Suddenly Pocahontas intervened and put her head on his. In his 1624 Generall Historie of Virginia, New-England, and the Summer Isles, Smith wrote that she risked her own life to save his, but modern scholars think she was probably playing a scripted role in some kind of adoption ceremony. Afterward, Powhatan called Smith his son.

The interesting thing is that Powhatan had chosen Pocahontas, a girl of 10, to do this.

After this episode, she began visiting Jamestown. She never just wandered in — she always came with a group of Powhatan’s envoys, and her presence signaled that they came in peace. The English learned, many years later, that Pocahontas was only a nickname. Her real name, Matoaka, had been concealed for fear the English could do her harm if they knew it. During this early period, when Powhatan was getting tools and weapons from the colony in exchange for badly needed food, colonial leaders presented Powhatan with a newly-arrived boy, 13-year-old Thomas Savage, and Powhatan gave a young man named Namontack in return. Such exchanges were common in relationships in the region; the boys could learn the other side’s language and customs and serve as go-betweens in the future. Pocahontas was there to help Thomas adjust to his new life.

But soon the Englishmen’s constant demands for food became too much. Virginia was deep in the worst drought in 770 years, and food was scarce. At the beginning of 1609, Smith led a party to visit Powhatan, and things seemed to be going well. But in the middle of the night, as the English slept, Pocahontas, Powhatan’s “dearest jewel and daughter, in that dark night came through the irksome woods” to warn Smith of a plot to kill them. Smith tried to reward her with “such things as she delighted in,” but with “tears running down her cheeks,” she said if she were seen with English presents, “she were but dead.” We can’t know if she was again acting on her father’s instructions or if she did indeed risk her life to warn them.

Powhatan moved his capital farther west to a location much harder for the English to reach, and Pocahontas quit visiting the fort. Thomas Savage moved with the Powhatans, and was soon joined by another boy, 14-year-old Henry Spelman. Everything changed while they were at Orapax, Powhatan’s new capital. Henry absconded to join a friendlier chief on the Potomac and Pocahontas intervened to save his life when her father sent men to bring him back. Powhatan decided it was time for Pocahontas to enter adult life, so she married a man named Kocoum. And he sent Thomas back to Jamestown, severing his last ties with the colony.

Little was heard from Orapax for a while. Then, toward the end of 1612, Capt. Samuel Argall was, as usual, looking for food. As he entered the Potomac, he heard rumors that Pocahontas was visiting there and he made up his mind “to possess myself of her by any stratagem that I could use.” His plan was to exchange her for English men held by Powhatan. He forced the Patawomekes, the people who had sheltered Henry Spelman after he left Orapax, to trick her into going on to his ship and sailed away with her, so 14-year-old Pocahontas returned to Jamestown as a prisoner.

Jamestown’s leaders soon discarded the plan of using her in a prisoner exchange and instead now saw her as their key to success.

A young puritan minister named Alexander Whitaker instructed her about Christianity, and a man named John Rolfe began to fall in love with her. Sometime in the spring of 1614 Pocahontas “renounced publicly her country Idolatry, openly confessed her Christian faith, [and] was, as she desired, baptized.” Colonist Ralph Hamor announced this in his 1615 book, A True Discourse of the Present State of Virginia; this publication included a letter from Gov. Sir Thomas Dale with exactly the same wording, stressing that her conversion was voluntary. Her baptismal name was Rebecca, and she became Rebecca Rolfe when she married John.

Pocahontas did in fact make the crucial contribution to Virginia’s success, but in a way that completely surprised everyone. Colonists had been trying to grow tobacco for years, but without success. Now suddenly, with Pocahontas present, John Rolfe succeeded in growing a crop Europeans would buy. Tobacco culture required very different techniques from European crops, and women were the agriculturalists in Chesapeake Algonquian society, so she was the one who understood both the crop and the environment. Tobacco transformed Virginia from a money drain to an economic success as smoking went from a pastime for the elite few in Europe to something everyone could afford.

Soon, Thomas Rolfe was born and the Virginia Company decided to bring Pocahontas and her son to London to show off their success. They arrived in late spring 1616, and she was presented as visiting royalty. Pocahontas was received at the Royal Court and in an elaborate ceremony by the Bishop of London. But the rapidly growing city of London was badly polluted — both its air and water. As the visiting party was moving down the Thames River to begin their homeward voyage, Pocahontas became very sick and they went ashore at Gravesend. She died and was buried there in March 1617, age 20. Baby Thomas was also sickly and John left him to be brought up by his brother in Norfolk, for fear he would not survive the long ocean voyage.

Despite her short life, Pocahontas was a key figure in the beginnings of English America. And it was her intelligence and willingness to take risks that made her so. She adapted to so many difficult situations, in a world so different from the one in which she’d grown up, and always found a way to succeed. Far from being a side note to the story of American history, she was in fact the hero of the tale.

Karen Ordahl Kupperman is the author of Pocahontas and the English Boys: Caught Between Cultures in Early Virginia, available now from NYU Press. 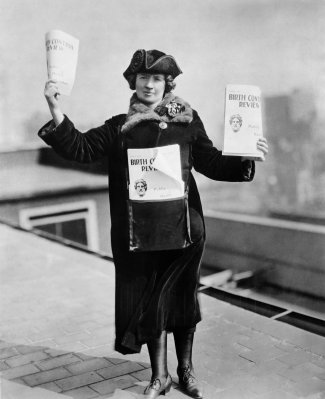 England's Most Dangerous Suffragette Was Too Radical to Remember. Her Part in Women's History Shouldn't Be Glossed Over
Next Up: Editor's Pick