Thirteen years ago, Barack Obama deployed some of his cold-eyed analysis when it came time to pick a running mate. He wanted to find a partner who was part of the political establishment as the nation got used to the idea of a young newcomer to Washington and the first Black nominee of a major party. He wanted a governing partner, of course, and a reliable mind to challenge his assumptions and occasional hubris. A few more miles on the road wouldn’t hurt either.

But the overlooked quality that he wanted was someone who wasn’t going to be knifing him from inside the West Wing. He had considered the likes of Tim Kaine and Evan Bayh, but ultimately that might look too much like the Bill Clinton-Al Gore partnership from 1992, setting up either up for potential runs for the top job.

Instead, Obama followed the unlikeliest of playbooks: the one George W. Bush used to select Dick Cheney, a longtime party power player who was never going to try to run for the White House on his own. And Obama picked Joe Biden, a 36-year veteran of the Senate who months earlier had ended his second White House run in a fast and deafening defeat. Surely, at age 66, Biden would be ready to retire at the end of however long they were in the White House.

Well, Obama got part of that bet right. Despite the occasional gaffe and errant political admission, Biden was unfailingly loyal to Obama even when they had deep and sincere disagreements.

But this is the part Obama got wrong: Biden wasn’t done chasing the gig he had coveted since his 20s. In the 2016 cycle, the death of Beau Biden was still too raw, and Biden simply wasn’t up for a tough race against Hillary Clinton and Bernie Sanders. But not long after settling into private life again in early 2017, Biden was teaching at the University of Pennsylvania, writing a book and out of elected office for the first time since 1971—and he wanted back in the game. By 2020, he became the consensus candidate of the Democratic Party, largely on the bet he was the best contender to defeat President Donald Trump.

When it came time for Biden to choose his running mate, he broke with Obama and Bush’s example and chose a candidate with a clear political future. He announced early on it would be a woman, and the then-77-year-old repeatedly described himself as a “transition candidate,” implying that a second term might not be in his game plan.

Enter Kamala Harris, a candidate who made history in becoming the first female to occupy the VP’s suite on the western edge of the West Wing, as well as the first person of Asian and Black descent to become the nominee. She worked for Biden in major ways, energizing a piece of the electorate that had, until then, been meh on Biden. It wasn’t an overstatement when The Atlantic said Biden made perhaps the most consequential VP selection in American political history.

Biden never pledged to serve just one term, but he also hasn’t said if he will run for a second. There are plenty of reasons to think Biden is still running in 2024. The last eligible President not to seek another term was Lyndon Johnson, although he had been on the job for five years by the time he was ready to make the decision because of John F. Kennedy’s assassination in the third year of his Presidency. Before Johnson, you have to go back to right after Reconstruction to find an incumbent who didn’t seek a second term.

Which is why Biden’s choice to give Harris one of the thorniest portfolios ever handed to a VP— the crisis at the Southern border—matters. Biden handed her a nearly impossible task of getting the sprawling U.S. government’s response to the flood of asylum seekers to heel. And, to put it bluntly, there are no good options at her fingertips. A crackdown could hurt her prospects down the line, especially with Hispanic voters who are increasingly a powerful force at the polls. Anything looking soft will ding her with law-and-order voters, especially suburban moms who may see the constant stream of stories on Fox News about migrants murdering Americans and invading the country. Put simply, this is a giant liability for her and everyone in Washington knows it.

But Harris isn’t alone. Biden has also handed a political skunk to another member of his Cabinet with White House ambitions. While Pete Buttigieg’s office at the Department of Transportation is nice, there’s little doubt he’ll be looking for an upgrade in the not-too-distant future. On one hand, he gets to trot out the good news of Biden’s massive infrastructure package as Harris flew to France on an unrelated mission. On the other, he is also the face of the supply-chain mess that could end up Grinching the holidays. Messing around with this much-anticipated Christmas, after last year’s holidays of isolation, isn’t a winning record to play up in the West Des Moines Whole Foods. His rivals will certainly seize on it.

Biden gets that deputizing a problematic portfolio is smart politics. After all, Obama enlisted him to manage the Recovery Act to check waste, fraud and abuse, and Biden successfully kept corruption on the dig out to a minimum. Because this isn’t Hollywood, Cabinet officers don’t challenge the Presidents who appoint them. (Although Signorney Weaver’s version of Hillary Clinton in 2012’s Political Animals remains a lovely alternative-history in which the protagonist quits as Secretary of State to challenge an Obama-esque incumbent, it just isn’t real.) Such a move in the real world would rupture the party and cast them as disloyal opportunists.

In that sense, it seems Biden is following the footsteps of Obama and Bush in an important way: staying publicly neutral in the choice for his party’s next nominee. It’s hard to argue that Biden did either Harris or Buttigieg a favor in their tough assignments. Which means both Harris and Buttigieg need to make every effort to make their assignments work to get in pole position when Biden decides his time at the wheel is over. 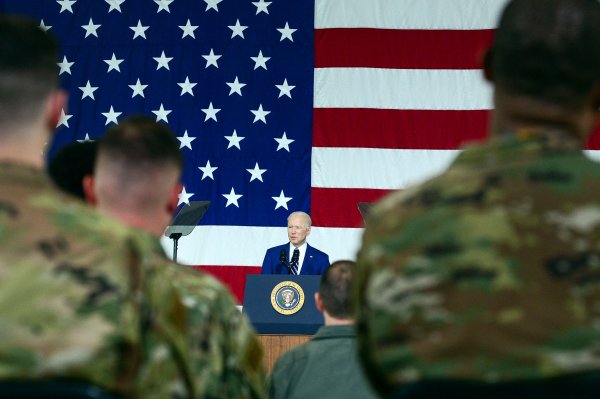 A Spike in Calls to the Veteran Crisis Line Could Signal Trouble for Biden
Next Up: Editor's Pick