Endless speeches. Vague pledges for decades in the future. Vast sums of money “unlocked”—but not directly invested—by governments. For anyone following the events at COP26, the abstractness of it all could be enough to make them feel lightheaded.

For a more concrete picture of the transformations that need to take place in the short term, it helps to look to cities. Although city mayors don’t have a formal role in the U.N. negotiations, at least a dozen of them came to Glasgow anyway, armed with emissions-cutting projects already underway, and goals for the next few years.

Oslo brought its climate budget, which, by forcing local legislators to prove spending is in line with emissions targets, has put the city on track to cut emissions by 50% in 2022 compared to 1990 levels. Paris, Bogota and London came with unprecedented programs—expanded during the pandemic—to take cars of their streets. Others who couldn’t make it to Glasgow have also shared concrete steps: four South African cities are rolling out the continent’s first zero-carbon building code, which will prevent millions of tons of emissions in the next few years. Seoul is in the process of installing 1 GW of solar energy capacity by 2022.

“The single fastest way that national governments can make good on the promises they’ve made here at COP in the next few years is to devolve more power to city governments,” says Mark Watts, director of the C40 climate leadership group of 97 cities, sitting in a glass-walled hotel restaurant near the COP26 site. “Among political leaders, there’s no one that’s more science based in the action and the commitments.”

In 2016, the C40 cities committed to limit global average temperature rise to 1.5°C over preindustrial-era levels. Though public support for that goal has never been more obvious, with massive youth-led demonstrations worldwide, national governments are still debating it at COP26.

“Governments that are closest to the people are best able to be responsive,” Austin mayor Steve Adler told TIME on Tuesday evening over the phone from Edinburgh, where he was spending the night before heading to Glasgow. “Our community is concerned about climate change and willing to really put our shoulder to our responsibilities. The national government is being pulled in lots of different ways.”

Adler is in Scotland primarily to tout a transit scheme, partly funded by a property tax hike approved by voters last year, that will add light rail and electric buses to car-centric Austin. The city is also bounding ahead of others in the transition to clean energy. Having invested early in solar power, renewables now account for 46% of power on Austin’s municipal-owned electricity grid, compared to 21% nationwide. In October, Austin brought forward its net-zero emissions target from 2050 to 2040, with a “strong emphasis” on cutting emissions by 2030.

Isolated pockets of ambition won’t add up to much if entire countries aren’t on board. But Adler says cities can help push other areas forward. “Part of our responsibility in the United States is demonstrating that climate action is good for economies,” he says. Workers are flooding into Austin, with its population increasing by a fifth over the last decade, and, recently, major tech firms have been setting up shop. The rise of clean energy in Austin plays a role, Adler says, because it has led to energy prices creeping lower and it provides a nice PR boost for companies. “One of the reasons [companies] are coming is because their workers want to live in a city like Austin that has those values on the environment,” says Adler. “So it’s become a really significant part of our economic development.”

Although they’re making progress, local governments still need to move faster. Accounting for an estimated 75% of emissions, there’s a lot of work to be done in cities to keep the 1.5°C target in reach. Over the next decade, C40 says cities need to double public transit use, retrofit millions of homes and rapidly phase in clean construction. If mayors can’t show they are acting in line with the 1.5°C goal, they will have their memberships of C40 revoked.

“Really where we’ve got to be at now, is ‘what’s your target for the next 12 months?’” Watts says. “And if you fail on any of them, understand why and correct it in the next year. The timeframes are going to get shorter and shorter.” 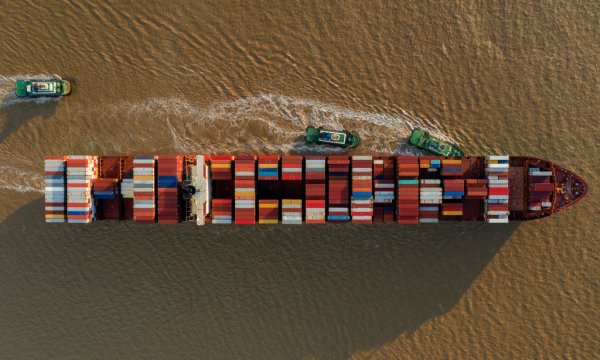 The Shipping Industry Sets Sail for Net-Zero Future at COP26
Next Up: Editor's Pick