In Passing, the film adaptation of Nella Larsen’s seminal 1929 novel of the same name, two women reckon with who they are and how they identify. Although both are Black, they are light-skinned enough that they can “pass” for white. The film, which premiered at Sundance and hits Netflix this week, takes a nuanced approach to parsing out the complexities of race and its role in our lives—not just the construct of it, but the performance of it. Larsen’s novel centers on two childhood friends whose chance encounter as adults shifts not only how they see themselves, but how they view their places in the world, with dramatic consequences.

This complex friendship is the inspiration for Rebecca Hall’s film adaptation, which is also her directorial debut. Actors Tessa Thompson and Ruth Negga play Irene and Clare, respectively, the two women whose reunion will upheave both their worlds and cause them to reconsider the lives they have chosen and the reasons behind those choices.

Here’s what to know about the Passing movie adaptation and the book it was based on.

What to know about Passing, the book

The novel begins when Irene Redfield receives a letter from her childhood friend Clare Kendry, who wants to reconnect and reminisces on their chance meeting two years earlier at a hotel in Chicago, their shared hometown. In this recollection, Irene, who now lives in Harlem, is home visiting her father, but stops during a shopping trip for a break on the rooftop of a hotel, where she’s approached by a white woman. Irene is initially fearful, since she is temporarily “passing” as white in order to have access to the rooftop, but she soon discovers that the woman is actually Clare, who is now fully living as a white woman after marrying a white man with whom she has a daughter. Before Irene returns to New York, where her husband and two sons live, she meets Clare’s wealthy husband, Jack, who is blatantly racist and completely unaware that Clare is Black. Irene is appalled at Jack’s racism and that Clare would pass for white, resolving to keep her distance from her old friend.

In the present, Jack and Clare have moved to New York, and Clare makes efforts to revive her friendship with Irene, who is deeply involved in the social scene of the Harlem Renaissance. While Irene is cautious, the two resume a tentative friendship. Clare, whose daughter is now at boarding school in Switzerland and whose husband is often away on business, soon ingratiates herself in the Redfields’ lives, attending social events with them and becoming a part of their friend group, much to the dismay of Irene, who begins to become jealous of Clare, especially after her husband Brian and her two sons become friendly with her.

During the holidays, Clare attends a party with Brian and Irene, who is increasingly more distressed by Clare’s presence and the chaos it has introduced into her life. Irene becomes especially troubled after seeing Brian and Clare exchange looks, but a conflict arises when Jack unexpectedly arrives at the party in a rage, having found out Clare’s true racial identity. The party ends with a tragic accident and an open-ended conclusion to the novel.

Racial passing from Black to white, as it’s depicted in Larsen’s novel, is part of a larger history of racial passing in the U.S., one that dates back to the late 18th century, when passing for white in the antebellum South could be a high-stakes escape from slavery to freedom. In later years, especially with the emergence of the “One-drop rule,” passing for white in a segregated society could mean more socioeconomic opportunities or possibilities, albeit at a very high cost. This history informed its own genre of “passing narratives,” by both white and Black authors, of which Larsen’s Passing is among the most heralded.

The book was well-received during its time, although it was critiqued for possibly reinforcing stereotypes about the “tragic mulatto,” a racist character trope often deployed in early American literature and later in film; its presence is nearly omnipresent in early passing narratives, often authored by white writers. The “tragic mulatto,” a mixed-race or biracial light-skinned person, often a woman, is constructed as someone who cannot find acceptance in either the Black or white community, and as a result is self-loathing and despondent about not belonging, with the character’s arc often culminating in their tragic death. This trope was deployed to discourage miscegenation and any kind of racial mixing—by portraying mixed-race men as violent and mixed-race women as tragic or hypersexualized and seductive, it dehumanized mixed-race people and stoked white anxieties about losing power and control.

While the book focuses primarily on racial identity and particularly the politics of racial passing, the novel also deftly addresses themes of class, sexuality and gender. Many of those themes have become more prominent in recent analyses of the novel; for example, in some later readings, scholars have made the case that racial passing isn’t the only form of passing in the novel, pointing to queer undertones in Irene and Clare’s relationship and in descriptions of Brian.

Hall, who directed and wrote the screenplay, was inspired to adapt Passing into a film in an effort to better understand her own mixed-race heritage. According to an interview with WBUR, Hall read the book 13 years ago, during a time when she was delving into her own family’s ambiguous racial history. In the time following, she learned that her mother, the opera singer Maria Ewing, was biracial and that her maternal grandfather, Norman Isaac Ewing, was a light-skinned Black man who had passed for white between the 1930s and 1950s in Detroit, Mich.

Hall’s adaptation of Passing is remarkably true to the novel, even pulling much of the dialogue directly from Larsen’s work, though there are a few subtle changes between the screen and the film. In the book, Irene and Clare were both raised on the South Side of Chicago, a historically Black neighborhood, and meet on a hotel rooftop in that city, with Irene is visiting from Harlem. In the film, Irene and Clare are both originally from Harlem, while Clare now lives in Chicago.

The timeline of the novel is also longer than that of the film; while the book takes place over the course of two years, marked by the letter correspondence of Irene and Clare, the film blurs the passage of time, making it the indefinite course of year. It also condenses some of the events of the book; while in the film, Irene and Clare meeting at the hotel includes Clare’s husband, John, in the book, Irene and Clare meet more than once and Irene’s introduction to John is alongside another friend, Gertrude, who is also a light-skinned Black woman who is married to a white man but who does not pass for white.

What to know about Nella Larsen, the author of Passing

When it comes to passing narratives, Nella Larsen is largely regarded as the preeminent author, despite having only published two novels, Quicksand (1928) and Passing (1929) and a number of short stories. Born in 1891 in Chicago to a white Danish mother and a Black father from the Danish West Indies, Larsen was raised in a white household after her father disappeared and her mother married a fellow white Dane, with whom she had another daughter. Larsen was in predominantly white spaces until she moved to Nashville in 1907 to attend a teacher training program affiliated with the historically Black Fisk University and later, a Black nursing program in the Bronx. These experiences no doubt informed her work, especially her novels, which both centered on racial passing, as well as on themes of isolation and otherness.

After marrying and moving to Harlem with Elmer Imes, who was the second Black man to receive a Ph.D in Physics, she began socializing with the intelligentsia of the Harlem Renaissance, which included the likes of Langston Hughes and W.E.B. DuBois. She published her first novel, Quicksand, which focused on a biracial woman searching for belonging, in 1928, and followed it with Passing in 1929. In 1930, she was accused of plagiarism for a short story she published; while none of the claims were proven, the alleged plagiarism is still disputed. Despite the controversy, she became the first Black woman to receive a Guggenheim fellowship the same year. The controversy, however, did sizable damage to her career and reputation in the literary world.

In her later years, Larsen worked as a nurse after her alimony from her then-ex-husband stopped after his death. She died in 1964, but her work has gained even more prominence posthumously, especially among modern literary scholars, for its complexity when it comes to race, sexuality and gender, paving the way for modern passing narratives like Danzy Senna’s Caucasia and Brit Bennett’s The Vanishing Half. 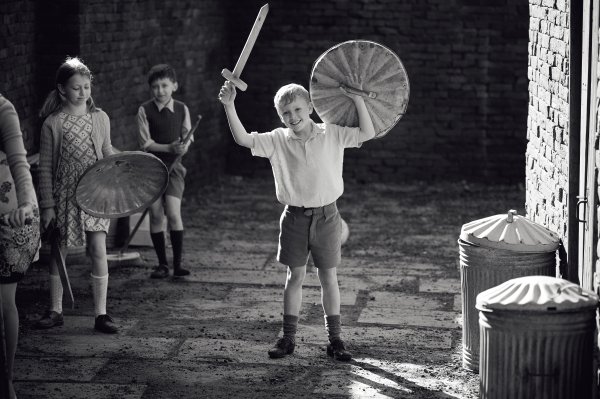 With Belfast, Kenneth Branagh Affectionately Recalls a Childhood in a City Torn by Strife
Next Up: Editor's Pick