Why Four Black Women Stood Up to the U.S. Army During World War II

Earlier this year, the women of the 6888th Postal Battalion Directory got a step closer to finally receiving the recognition they deserve. The Senate passed legislation to award the only all-Black Women’s Army Corps (WACs) deployed overseas during World War II the Congressional Gold Medal. The “Six Triple Eight” self-contained postal unit completed the seemingly impossible task of tackling the mail backlog during the final months of the war. Now, activists are pushing the House to move on the legislation to make the recognition official.

The spotlight on the “Six Triple Eight” has sparked increased interest in the African American female military experience during World War II. But the successes of this unit are only a part of a much bigger story. The reality was that the battalion represented only 855 out of approximately 6,500 Black women who served in the U.S. WACs from 1942 to 1945.

The Black WACs rarely, if ever, were recognized for their service by the American public when they returned to civilian life. If we were to rely only on the biggest newspapers of the time, one would think that Black female soldiers did not make any meaningful contributions to the war effort. Thankfully, we have the archives of the Chicago Defender, Pittsburgh Courier and other Black press outlets that regularly documented their achievements.

The majority of the more than 5,600 remaining Black women who served during World War II never left the United States mainland. Promised nursing and medical technician training, these women signed up in droves. “Urgent! More nurses needed now – All women can help!” read varying headlines in the St. Louis Post-Dispatch, Charlotte Observer and the New York Daily News. The accompanying articles promised that enlisting in a WAC Hospital unit would lead to “valuable technical and on-the-job training” even if the women did not have any previous related experience or education.

Read more: How the Only All-Black WAC Unit Tackled a Daunting WWII Mission

In March 1945, while the Six Triple Eight was in England breaking records with their mail distribution system, discontent was brewing back home. A group of African American WACs, reassigned from Fort Des Moines in Iowa to Fort Devens in Massachusetts, found themselves doing janitorial and orderly tasks—not the nursing and medical technician roles that had been promised.

Even the handful of Black WACs who had prior surgical training were assigned orderly duties. And they almost always pulled the perpetually hated kitchen patrol (KP) duty. Meanwhile, all the white WACs had been assigned more desirable jobs like medical technician and surgical technician. Anger among the Black WACs brewed over the tough labor, failed promises and discrimination. Private Alice Young would later testify that she overheard Colonel Walter Crandall, the hospital’s commanding officer, saying he did not want “colored [WACs] as medical technicians,” according to historian Sandra M. Bolzenius, author of Glory in Their Spirit. Young also testified that Crandall went on to say that the Black women under his command were sent there to “scrub and wash floors, wash dishes and do all the dirty work.” The conditions got so bad that Private Beulah Sims attempted suicide. (She was one of several Black WACs at Fort Devens who attempted suicide in the days leading up to the strike and immediately after.)

On March 9, 1945, 54 of the 100 Black women stationed at Fort Devens refused to show up to work—effectively going on strike—to protest against their treatment and working conditions. Instead of reporting to their assigned hospital wards, they convened in their barracks dayroom to notify their officers of the discrimination they experienced. The next day, they still refused to work. General Sherman Miles, commander of the First Service Command, read them the articles of war, and ordered them to resume their duties.

That direct order put the striking women in a corner. Refusing to comply could be considered mutiny—with the most severe punishment being death. Nearly all of the women returned to work. But four—Privates Mary Green, Anna Morrison, Johnnie Murphy and Alice Young—continued to hold out. “I would take death before I would go back to work,” Murphy declared.

The four women were court martialed. They were initially sentenced to a year of hard labor and dishonorably discharged. But Black America rallied around them. The local NAACP hired their legal counsel. The future Supreme Court Justice, Thurgood Marshall, was consulted. With headlines like, ”4 Negro Wacs Convicted, Disobedience” (The Indiana Gazette, Indiana, Pa.) and “Four Negro Wacs Sentenced to Year at Hard Labor” (The Daily Herald, Biloxi, Miss.), their story made the front pages of the Black press and the national mainstream newspapers. Letters in support of the women from both Black and white American flooded the offices of President Franklin D. Roosevelt and Secretary of War Henry L. Stimson. According to Bolzenius, this particular disciplinary hearing was “the most open and well-documented of all Wac courts-martial” as military brass wanted to use the event to showcase the absence of racism in their courts while the women used their testimonies to document its everyday presence.

The charges against the four privates were later dismissed, largely to avoid negative publicity from tarnishing the war PR machine in the last months of the war. Colonel Crandall took a convenient “planned” leave of absence after an internal investigation after the trial concluded that the Black WAC detachment’s complaints had been justified. As for the Black women at Fort Devens, their job descriptions were revised so that they no longer had to scrub trash cans, wash dishes or clean the walls. But they all still were orderlies and still received all of the KP assignments while the white WACs continued to receive none. For all of the hoopla the strike had caused, not a lot had changed.

One thing that I’ve learned from the experiences of World War II-era Black women is that very little in the Black female work experience has changed from then to now. I have personally experienced being told I was “too good” at my job to be promoted while the white women who came in after me were supported in their efforts to build their careers (and increase their pay). I have also been reprimanded after speaking out about unfair practices at work. In her book The Memo, Minda Harts talks about the attempts by “the powers that be” to stonewall her own career advancement and successes not dissimilar to what these Black female soldiers experienced over 75 years ago. However, Black women, whether they are a part of the military or not, can look to how those who came before us challenged the forces that actively limited their professional opportunities, created uncomfortable workplaces, and impacted our ability to make a fair and comfortable living.

I grew up surrounded by Black women from The Greatest Generation – my grandmothers, their female relatives, and their friends – who were spunky, feisty, opinionated and tough. They did not take —shall we say “stuff”—from anyone. These women are physically gone from my life now so I can only speculate about what made them that way. This is what makes my research into the Black female World War II experience so valuable.

Black women of today have something to learn by remembering the four Black WAC privates who were brave enough to stand up to the U.S. military machine during World War II, and others like them. We can build upon their gains, fortify our resilience, and remain undaunted by the walls we still have left to climb. If nothing else, we should know that we don’t have to put up with anyone’s stuff. Because they sure didn’t.

Kaia Alderson is the author of SISTERS IN ARMS, published by William Morrow in August 2021. She is an alumna of such respected writer workshops as the Hurston-Wright Foundation, Voices of Our Nation (VONA), Callaloo, and The Second City. 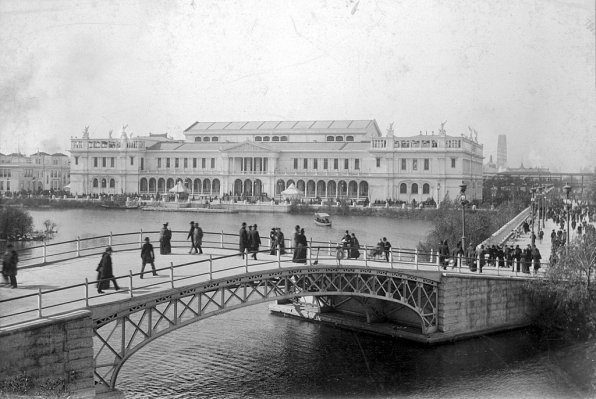 What the 1893 World's Fair Teaches Us About White Feminism Today
Next Up: Editor's Pick