The legal career of Thurgood Marshall — the man who became famous arguing cases such as Brown v. Board of Education and in 1967 became the first black Supreme Court justice — is full of cases that changed the American legal landscape.

But the case that inspired the new movie Marshall, arriving in theaters on Friday and starring Chadwick Boseman, isn’t one of those famous lawsuits. It’s not a grand civil-rights case that would go all the way to the Supreme Court, nor has the name of the man Marshall defended gone down in history. And yet it provides a window into a side of civil-rights history that is often overshadowed — but no less important.

The facts of the case, as described in Rawn James Jr.’s book Root and Branch: Charles Hamilton Houston, Thurgood Marshall, and the Struggle to End Segregation, were that a wealthy white Connecticut woman named Eleanor Strubing had accused her black chauffeur, Joseph Spell, of raping her while her husband was out of town for work. She claimed that over the course of one December 1940 night, he had raped her four times, written a ransom note, bound and gagged her, and then thrown her into a reservoir. Spell maintained that while it was true that he had initiated a sexual interaction, it had been consensual, and that they had stopped when she said she was worried about being found out.

Marshall and local attorney Samuel Friedman (played in the movie by Josh Gad) suggested that Strubing had lied about the rape in order to deal with her own guilt and fear about what she had done, and convinced the jury that her story was inconsistent with her own prior statements and the physical evidence. Spell was found not guilty.

The celebrated lawyer saw criminal cases like Joseph Spell’s as something of a break from the segregation cases that tended to occupy his time. They also were helpful for the NAACP as an organization, as lurid news coverage helped drum up membership. As Mark V. Tushnet explains in his book Making Civil Rights Law, headline-making criminal cases were one of the most effective branch recruitment tools at their disposal in the pre-war 1940s — especially because of the organization’s widely publicized stance on only taking such cases when they believed the defendant was innocent.

“At this point in his career, Marshall was better known to the public for his defense of criminals than for his attacks on Jim Crow,” Juan Williams writes in his biography of Marshall. “He stood as a living, breathing shield for black people against the lynch mob as well as the judge’s death sentence.”

And, though segregation was not the law of the land in states like Connecticut (and Marshall was less likely to face the threat of physical violence in the course of doing his job there), the Spell case is a reminder that such a shield was necessary in the North too. Thanks to barriers on employment, education and residency, African-Americans were left with few options beyond domestic work of the type Spell performed. Proving his innocence was also a matter of economic life and death, as reports spread of fearful white families dismissing their black employees.

That aspect of the case was explored by Daniel J. Sharfstein, a professor of law and history at Vanderbilt, in a 2005 Legal Affairs article, pointing out that none other than W. E. B. Du Bois himself, a founder of the NAACP, “resigned from the organization in a huff” in 1934 over the need to pay more attention to Northern discrimination as a barrier to full racial equality.

“There were any number of cases [the NAACP] could have taken but they only had so many lawyers and the resources were limited, so they had to be very careful about the cases they picked. They chose to put resources into Joseph Spell’s defense not just because it was making lurid headlines, but because of what the fact that it was making lurid headlines represented,” Sharfstein tells TIME. “It seemed like this was a case that was actually harming people’s livelihoods and as a result was a case that was drawing a tremendous amount of attention in the local African-American communities.”

Sending Thurgood Marshall, who was already a well-known figure, sent the message that this case mattered to the NAACP. People would listen, locally and nationally.

And in retrospect, what they would have heard was an additional unfortunate lesson about the history of civil rights. Work that Marshall did in places like Connecticut for people like Joseph Spell was a reminder that changing the law does not necessarily change people’s prejudices. Ending codified segregation would not mean the end of NAACP’s legal work.

“At a basic level I view the Spell case as a premonition of the kinds of challenges that the NAACP would face in the absence of de jure segregation,” Sharfstein says. “Once Brown v. Board is decided, this huge NAACP victory, then the real battles begin.” 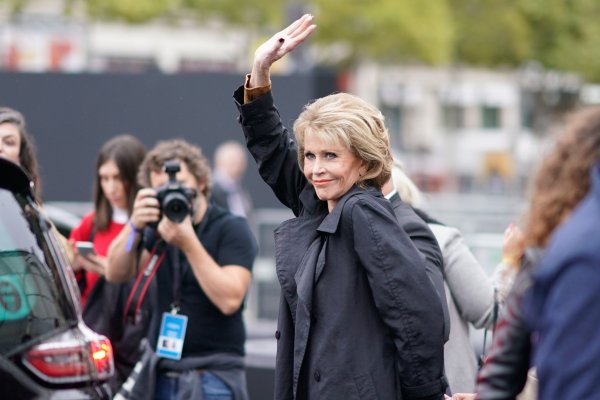 Jane Fonda 'Ashamed' of Her Silence on Weinstein
Next Up: Editor's Pick