I was 13 weeks pregnant with my first child when I first felt the sharp, tearing pain in my groin. I didn’t know it then, but my pubic symphysis—the tiny joint holding together the bones of the pelvis—was separating. I went from exercising every day to needing a crutch to walk. Any movement was excruciating. My husband half-carried me from bed, then squeezed my hips together until his arms shook to give me a few moments of relief.

I had read that taking an epidural during labor could lead to permanent damage for symphysis pubic dysfunction sufferers, not due to the anesthetic itself, but because losing sensation and control of the legs could mean they’d be manipulated beyond their small range of motion, further separating the fragile joint. This was largely anecdotal. Still, I refused the epidural until I was delirious with pain, imagining I could claw out of my own body, though I was tethered to the bed, to the fetal-monitoring machine, to my baby, whom it would take me an hour and a half to push out through screams and sobs and the gut-wrenching terror that I couldn’t do it, that I might fail her now, in my very first attempt to protect her. After almost 24 hours of labor, my daughter was born.

Afterward, jubilation cut through the haze of sleepless nights. Love like thunder and lightning, earth-shaking and illuminating. For the first week, all she did was sleep and eat. One day, the app on my phone noted 22 breastfeeding sessions. Six to eight hours a day with her attached to my nipples; a hissed inhale every time she latched as the sensitive skin cracked and bled. Each time my milk let down, my uterus contracted, triggering a rush of blood that soaked the 7-inch-wide, 14-inch-long hospital pads I’d brought home. I never felt clean. There was never time to shower. I could walk again, but I was sore and swollen, a stranger in my own body.

At times that first week was blissful. We were cocooned, the three of us, and the cocoon was quiet and warm. Then our daughter woke up. She grunted and writhed, twisting in our arms. Her belly was hard and distended. She yowled like a suffering animal, each cry making my pulse pound, my skin go cold with sweat. She was happy only when she fed, and she fed at least every other hour, around the clock.

Three weeks in, she was diagnosed with cow’s milk protein intolerance, an allergy that causes extreme gastrointestinal pain and required me to eliminate anything with lactose, whey, casein or soy from my diet. (That, or buy hypoallergenic formula for upwards of $300 per month.) It would take at least another three weeks for the proteins to leave her system.

My husband cooked for me, he bathed and changed her, he took her during the brief slices of day she wasn’t feeding. Still, I hardly slept. I lay in bed with a mind full of dark imaginings. I could drop her, the softness of her skull opening against the hard tile floor. I could forget her in the car seat on a 90-degree day. I could be putting her in the car seat and someone could bash me over the head and take her. On my phone, I read articles about babies who died of brain cancer, babies who were thrown over fences, babies who simply, mysteriously, stopped breathing. I wept silently while she and my husband slept. I had to stay awake, I thought. I had to think of everything that could go wrong in order to prevent it.

That’s where I was at four weeks postpartum: sleepless, bleeding, raw, so desperately in love and hormonally out of whack that all I could think about was my baby dying. And I was lucky. I did not get an episiotomy or a C-section. I suffered no infections. I birthed one healthy, live child with a manageable allergy. I was a freelance writer who worked from home. My husband, who is self-employed selling commercial real estate, could stay home with me. Our leave wasn’t paid—it wasn’t even leave, exactly, but a semi-continuation of our normal work lives. Still, at least we could be home together. Most new parents do not have this option. In 2020, only about 20% of private-sector workers—and 8% of those in the bottom wage quartile—had access to paid family leave.

As of November 3, House Democrats have put four weeks of paid family and medical leave back into their Build Back Better Act. Four weeks, down from the 12 originally proposed by the Biden Administration. As many of us know, the U.S. is one of only six countries—and the only wealthy country—in the world without any nationally mandated paid leave. The New York Times reported that globally, the average paid maternity leave is 29 weeks, and the average paid paternity leave is 16 weeks. Of the 186 countries that offer paid leave for birthing people, only one offers less than four weeks. And many daycares won’t even take babies younger than 6 weeks. Even with all my advantages, I would not have been physically, intellectually or emotionally equipped to return to an office so soon after giving birth. And yet over the past week it has seemed possible that the Democrats would move ahead without any paid leave at all in their plan.

Read More: Women Are Deciding Not to Have Babies Because of the Pandemic. That’s Bad for All of Us

In September 2020, I gave birth to our second child, a son. My entire pregnancy, as painful as the first, had also been isolated. I labored in a mask, and only my husband was allowed in the hospital room. My recovery was similar to the first time, with exceptions: I bled for three months instead of six weeks, had a 2-and-a-half-year-old who still needed me, and it was the middle of a global pandemic. Again, I was one of the lucky ones: I sold my debut novel a week after my son was born. I would have two months off work and the comfort of knowing at least part of my advance was imminent. But it would be 14 months—14 months—before our baby consistently slept through the night. We are only now starting to feel like we are doing more than surviving.

It is critical that birthing parents get a chance to recover from childbirth before returning to the workplace, but it’s also important that all new parents, regardless of whether they delivered their children, have the opportunity to care for and bond with the newest members of their families. These should not be privileges afforded exclusively to those with means or flexible jobs or employers whose policies allow it. In a time when female caregivers, often mothers, have been forced to leave the workforce by the millions, families need more support than ever. Paid family leave is not a luxury. It’s not a vacation. It is, on top of being economically smart, simply decent. It is a moral imperative.

And four weeks is not enough. Not by a long shot. 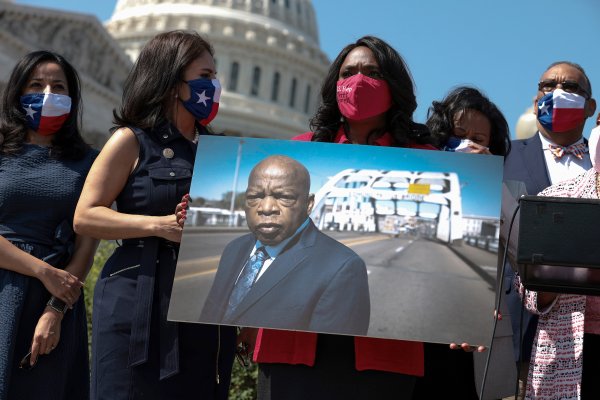 How to Pass Voting Rights With Abolishing the Filibuster
Next Up: Editor's Pick