By Melissa Chan and Madeleine Carlisle

In what may be a troubling sign for the gun-safety movement nationwide, the majority of justices on the U.S. Supreme Court seemed inclined Wednesday to strike down a contested concealed-carry law, which could make it easier for millions of people to carry firearms in public.

While hearing its biggest gun-rights case in more than a decade, the newly conservative majority appeared to question the constitutionality of a century-old provision in New York state that requires people to prove they have a special need for self-protection if they want to carry a concealed handgun outside of their home.

The challengers in the suit—backed by the NRA-affiliated New York State Rifle & Pistol Association—argue that the restriction violates the Second Amendment, while the state and the Biden Administration say it’s a life-saving measure that prevents densely populated areas from being flooded with guns. The high-stakes case is larger than New York alone, as the court’s ruling could impact several other states that have laws similar to New York’s in requiring people to prove to a licensing authority that they have a specific need to carry a gun.

Read more: Why the Gun Rights Case Before the Supreme Court Matters So Much

In their line of questioning, some of the court’s conservative justices, including the Trump-nominated Brett Kavanaugh and Justice Samuel Alito, scrutinized a key part of the law that requires applicants to show they face a threat that’s distinct and unique from the general population. “Why isn’t it good enough to say, ‘I live in a violent area, and I want to be able to defend myself?” asked Kavanaugh, who joined the court in 2018.

Alito questioned why that wouldn’t apply to an everyday worker who has to travel through high-crime areas to get home after late-night shifts in Manhattan. “All these people with illegal guns. They are on the subway. They’re walking around the streets,” Alito said. “But the ordinary, hard-working, law-abiding people I mentioned, no, they can’t be armed.”

On Wednesday, Barbara Underwood, the solicitor general of New York, told the justices that the licenses are not usually granted for general anxieties. Echoing the dozens of gun-safety supporters who filed briefs in the case, Underwood said the law prevents the mass proliferation of guns in densely populated areas, which she said creates a higher risk of gun violence. When asked to provide evidence to prove that, Underwood cited “success that New York has had in keeping gun violence down.”

Read more: More People Than Ever Are Trying to Carry Guns Onto Planes

During the roughly two-hour hearing, the justices threw out several hypothetical scenarios—including if there was a serial killer on the loose—to see what might justify a New Yorker to be granted a concealed-carry license. But much of the back-and-forth focused on what striking down New York’s law would look like practically.

Several justices probed both parties on the permissibility of weapons in “sensitive places,” including in the subway, on college campuses and in Times Square on New Year’s Eve. That line of questioning indicated that the justices appeared convinced that restrictions on guns in sensitive places were constitutionally permissible, according to Adam Winkler, a UCLA constitutional law professor and author of Gunfight: The Battle Over the Right to Bear Arms in America.

Many of the justices’ questions also focused on the history and tradition of regulating concealed-carry firearms. Both New York and the Biden Administration presented examples of past American laws that severely did so. In Winkler’s opinion, “the argument also showed how difficult it will be for those justices to justify striking down New York’s law.”

A demonstrator wears a gun on his belt during a rally supporting the 2nd Amendment in Fowlerville, Michigan on May 15, 2021.
Jeff Kowalsky—AFP/ Getty Images

The Supreme Court has not ruled on a gun-rights case since landmark decisions in 2008 and 2010 upholding that the Second Amendment protects a private citizen’s right to keep a firearm in the home for “traditionally lawful purposes,” including self-defense. It could now decide whether private citizens have the constitutional right to carry that firearm outside of their home, as well.

Legal experts say the court’s decision to take up the case at all, after years of turning away numerous Second Amendment-related appeals, suggests there’s a good chance it could choose to change the law. Experts attribute that to the changed makeup of the bench, which became a 6-3 conservative supermajority when Amy Coney Barrett joined in October 2020. Notably, of the Republican-appointed justices, Barrett seemed the most skeptical about striking down the law, repeatedly asking what it would look like in practice.

“Today’s argument made clear that even the court’s most conservative justices have hesitations about granting the gun lobby its ultimate goal in this case—the unrestricted right to carry guns in all public places,” says Eric Tirschwell, executive director of Everytown Law.

Read more: Children and Teenagers Are Being Shot in Record Numbers

A decision likely won’t come until next year, but gun-safety advocates say that if the challengers prevail, there could be deadly and far-reaching repercussions amid a rise in shootings and firearm sales nationwide. So far this year, more than 17,000 people have been killed by guns, and more than 33,000 have been injured, according to the Gun Violence Archive, a nonprofit that tracks shooting incidents. Last year, the group tallied the highest death toll from gun homicides and non-suicide-related shootings in more than 20 years.

Robyn Thomas, executive director of the Giffords Law Center, says if the court relaxes New York’s concealed-carry laws, it would create a “virtual arms race,” in which everybody has to arm up in order to protect themselves.

Such a world terrifies Fred Guttenberg, whose 14-year-old daughter Jaime was fatally shot three years ago at Marjory Stoneman Douglas High School in Parkland, Fla. Deep concern filled Guttenberg as he listened to the live-streamed hearing from the steps of the Supreme Court’s building, where he was surrounded by dozens of other gun-safety activists.

If the petitioners win, “it’s going to be guns for anyone, anywhere, anytime,” Guttenberg says. “That doesn’t make anyone safer,” he adds. 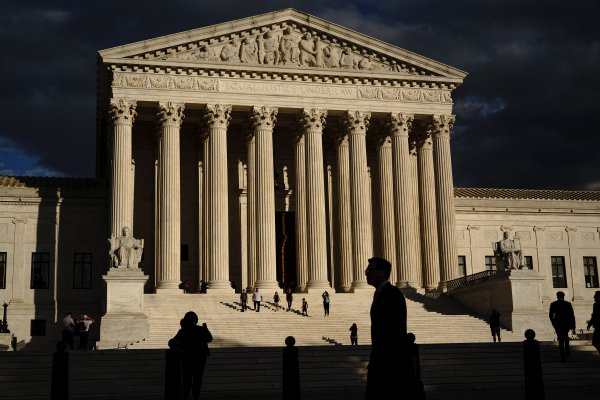 Why The Supreme Court's Gun Case Matters So Much
Next Up: Editor's Pick