In 'Alarming' Trend, More People Than Ever Are Trying to Carry Guns Onto Planes

One of the many firearms that the Transportation Security Administration confiscated at an Atlanta airport security checkpoint in 2021.
Courtesy TSA
By Melissa Chan

More travelers have been caught at U.S. airports trying to board planes with guns so far this year than any other year in the last two decades, according to newly released federal figures, and most of the weapons were loaded.

With more than two months still remaining in 2021, the Transportation Security Administration (TSA) has seized nearly 4,500 guns at airport security checkpoints, compared with about 4,400 in all of 2019, before the pandemic caused air travel to plummet in 2020. A total of 976 firearms were seized in 2009. About 85% of the weapons caught so far this year were loaded, the agency says. They were found on passengers or in carry-on bags across 248 U.S. airports, largely in Atlanta and Dallas-Fort Worth.

TSA Administrator David Pekoske says that’s an “alarming” record to set during a pandemic when fewer people are flying. And it’s one that will likely increase during the upcoming holiday months, the TSA says.

With the exception of 2020, when COVID-19 restrictions drastically reduced air travel, the TSA’s number of firearm discoveries has climbed each year since 2009. Even in 2020, while screening far fewer passengers, TSA officers still detected more than 3,200 firearms at checkpoints—twice as many per million passengers than in 2019. About 83% were loaded.

That’s not surprising to gun-safety advocates, who blame this year’s record haul on the surge in gun sales during the pandemic. In 2020, the FBI conducted nearly 40 million firearm background checks, which is more than any year on record, according to the agency’s data. That year, about 6.9 million people in the U.S. became first-time gun owners, according to estimates by the National Shooting Sports Foundation, a gun trade group. In 2021, the Small Arms Analytics & Forecasting says the firearms market “remains extraordinarily active,” with an estimated 14.8 million gun purchases from January to September. The FBI has already conducted more than 30 million background checks in that timeframe.

Read more: Racial Tensions in the U.S. Are Helping to Fuel a Rise in Black Gun Ownership

TSA spokesperson Sari Koshetz says the surge in gun confiscations is partially because more people own guns and also because many are flying for the first time since the start of the pandemic. “They are leaving home in a stressed state without focusing on exactly where their gun is,” Koshetz says. Even in accidental cases, Koshetz says the “danger of this trend is amplified by the fact that many of the loaded weapons also have a round chambered, and an accidental discharge could have tragic results.”

Travelers wait to board a flight at Philadelphia International Airport on Aug. 6, 2021.
Hannah Beier—Bloomberg/Getty Images

The trend is extra concerning, considering how many airline workers have recently had altercations with unruly passengers. So many passengers have disrupted flights with threatening or violent behavior that the Federal Aviation Administration (FAA) in January launched a “zero tolerance” campaign. This year, the FAA has issued more than $1 million in fines against passengers for disturbances. There have been nearly 5,000 reports of unruly passengers and more than 3,400 mask-related incidents, the agency says.

On May 24, a passenger aboard an Orlando-bound from New York City allegedly grabbed a flight attendant by the ankles and put his head up her skirt, the FAA says. The traveler was fined $45,000 for also allegedly throwing his luggage at other passengers, causing the flight to make an emergency landing.

Add firearms into the mix and tense altercations could easily escalate. “Firearms, particularly loaded firearms, introduce an unnecessary risk at checkpoints, have no place in the passenger cabin of an airplane, and represent a very costly mistake for the passengers who attempt to board a flight with them,” Pekoske says.

Unloaded firearms that are packed in locked cases and declared at check-in are allowed to fly in the cargo bay but never inside the passenger cabin, according to federal guidelines. Violators face up to $13,910 in penalties and sometimes arrest, depending on whether they are repeat offenders and whether their gun was loaded. It’s unclear how many were arrested and fined this year. 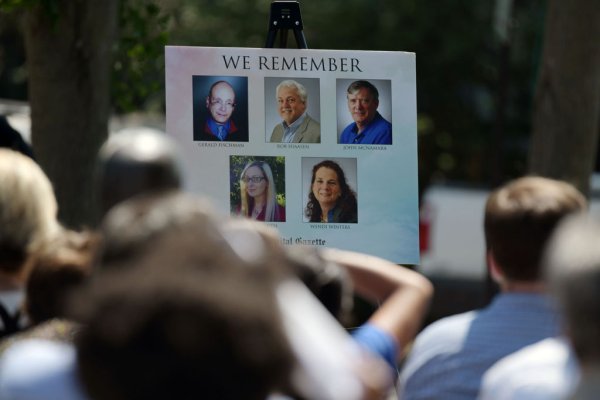 Capital Gazette Gunman Gets Multiple Life in Prison Sentences
Next Up: Editor's Pick