Parents of elementary school children received great news last week; the U.S. Food and Drug Administration authorized the emergency use of the Pfizer-BioNTech COVID-19 vaccine for children 5-11 years old. The Centers for Disease Control and Prevention signed off in turn on Nov. 2, and now kids may be able to start getting vaccinated as soon as this week with a dose one-third of the strength given to those 12 and older.

And yet, some parents are still worried about how their children will react to these safe and effective vaccines. Reasons for their hesitancy are broad, but hesitancy about medical interventions to resist infectious disease is nothing new in the United States—and can be traced back as far as the nation’s earliest days.

In the late 18th century, one of America’s Founding Fathers penned a timely message for parents about the importance of protecting children from infectious disease. It came from painful first-hand experience; as a 30-year-old father, Benjamin Franklin lost the youngest of his two sons, Francis Folger Franklin, to smallpox on Nov. 21, 1736, in Philadelphia. Francis was four years old. As Franklin wrote about this personal tragedy in his posthumously-published autobiography:

Smallpox epidemics occurred periodically in colonial America, says Howard Markel, pediatrician and Director, Center for the History of Medicine at the University of Michigan. Vaccinations weren’t available yet, so physicians offered inoculations, a dangerous procedure in which doctors filled a deep incision in the arm with the pus of a smallpox patient.

“Inoculation was a really risky thing,” says Markel, explaining that patients agreeing to the treatment “definitely got very sick after it. Those who survived would be immune, [but] some 15%-20% got active smallpox and died.”

There was some resistance to inoculations based on the procedure’s safety, but resistance was also ginned up by influencers. In fact, in 1721, Franklin’s own brother started a newspaper, the New England Courant, that was very critical of a well-known preacher in favor of inoculation, Cotton Mather. “James Franklin knew next to nothing of the etiology of smallpox, but he knew he despised Mather for what James judged the eminent minister’s smugness and his inordinate influence over the life of Boston,” H.W. Brands writes in The First American: The Life and Times of Benjamin Franklin. “If Mather advocated inoculation, the Courant must oppose it—and did.”

Brands sees a parallel between the COVID-19 vaccine hesitancy today. “Even in modern times, people don’t rely on science in all cases. They have other agendas, and then they try to suit their explanations to those other agendas, in some cases more than to the science.”

Read more: The U.S. Has Had ‘Vaccine Passports’ Before—And They Worked

Writing just over a month after his son’s passing, Franklin called inoculation “a safe and beneficial Practice,” and said that the only reason he hadn’t inoculated Franky was because the boy had been under the weather. “I intended to have my Child inoculated, as soon as he should have recovered sufficient Strength from a Flux with which he had been long afflicted,” according to a statement printed in the Dec. 30, 1736, issue of the Pennsylvania Gazette.

“He thought he probably shouldn’t give it to the kid unless the kid is really in good health,” Brands tells TIME. “Secondly—and this is the part that made Franklin feel guilty in all his later years—he was just too busy to do it. Franklin blamed himself for not vaccinating Francis… and it’s something he never got over.”

Over the next decades, Franklin published information about inoculation in the Gazette and established the Society for Inoculating the Poor Gratis in 1774 in Philadelphia to make inoculation more affordable.

Franklin wouldn’t live to see the first successful vaccine deployed. In 1796, physician Edward Jenner discovered vaccines, developing the first smallpox vaccine, six years after Franklin’s death. In 1980, the World Health Organization declared smallpox eradicated worldwide. But while Franklin lived at a very different moment in history, his message to protect loved ones from infectious disease stands the test of time, especially at a time when there are news reports of parents who didn’t get vaccinated losing their children to COVID-19.

And parents today should have a much easier decision than Franklin did.

And as for where Franklin would stand on today’s crop of proven vaccines, given the data saying they protect people from serious illness, Brands says, “This is what the evidence demonstrates, and Franklin was an evidence based guy.” 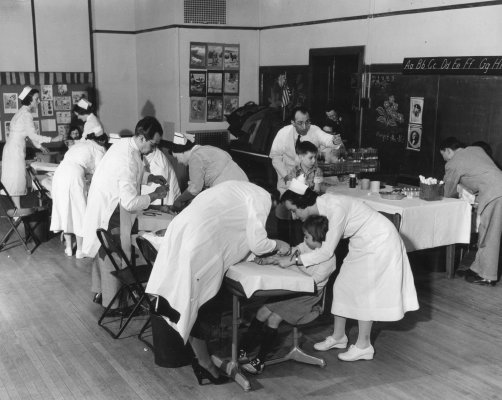 The Long History of Vaccinating Kids in School
Next Up: Editor's Pick