To Get Kids Vaccinated Against COVID-19, Health Officials Will Need to Reach Hesitant Parents

For as long as COVID-19 vaccines have existed, Melissa Chernofsky has been practically counting down the days until she can get one for her 5-year-old son. “If it was like getting Lollapalooza tickets, where you have to camp out all night, that’s what I would do,” says the 46-year-old from Brooklyn.

Chernofsky got a shot for herself as soon as she was eligible, and says she has never hesitated about doing the same for her child once she has the option. “As a parent, our number one job is to keep our kids safe,” she says. “I don’t really understand the idea that if there is a tool that can keep your kid from getting a disease, that you wouldn’t give it to them.”

One such tool—Pfizer-BioNTech’s COVID-19 vaccine for 5- to 11-year-olds—was authorized by the U.S. Food and Drug Administration on Oct. 29, bringing it a step closer to widespread availability. If the U.S. Centers for Disease Control and Prevention (CDC) recommends it for some or all children in that age group, kids could start getting vaccinated in the coming days.

But for every parent who feels as passionately pro-vaccine as Chernofsky does, there is at least one other with serious concerns about vaccinating their child. According to an October Kaiser Family Foundation poll, 27% of parents with kids ages 5 to 11 said they would vaccinate their child right away. But even more—35%—said they either definitely wouldn’t vaccinate or wouldn’t unless required. The rest were somewhere in the middle and said they would “wait and see.”

That split illustrates the significant challenge ahead of federal officials and health care workers, who must be ready to fulfill many families’ urgent desire for shots while also reaching those who are hesitant.

Dr. Sara Bode, who is the medical director of school-based and mobile-care clinics for Ohio’s Nationwide Children’s Hospital, says pediatric hospitals and public-health departments around the country are gearing up to hold larger-scale clinics that can satisfy much of the pent-up demand for pediatric shots. Vaccine supply is no longer an issue, so she thinks parents who want to vaccinate their kids should be able to do so easily. But “once this initial surge is over and everyone who wanted it gets it,” Bode says, “that’s where the real work starts to happen.”

Once it begins, a successful vaccine rollout must serve parents with questions or concerns about the vaccine in addition to those who are highly motivated—not just for the sake of those families, but for U.S. public health. Immunizing the roughly 28 million U.S. kids between the ages of 5 and 11 is a key piece of federal officials’ plan for controlling the virus, following their push to vaccinate older children after a shot was authorized for 12- to 15-year-olds in May.

“Not getting vaccinated means that our kids could potentially pass on the virus to others if they get infected,” U.S. Surgeon General Dr. Vivek Murthy said during a May call with parents, pediatricians, youth organizations and community leaders. “Breaking the chain of transmission is going to require us vaccinating our children.”

And, since 5- to 11-year-olds are too young to consent to vaccination themselves, that’s going to require convincing parents who, in many cases, are even more skeptical about vaccinating their children than they were about getting inoculated themselves. All told, about 78% of U.S. residents 12 and older have gotten at least one dose, but looking specifically at 12- to 15-year-olds, that number falls to about 57%.

“Messaging has to be to the parents, not to the kids,” Bode says. “It has to be sensitive and it has to be, usually, one-on-one,” so it can address each parent’s specific concerns. Individuals also tend to respond better when they hear about the vaccine from people who live and work in their community, rather than from government agencies or mass-communications campaigns, Bode adds.

The Biden Administration is banking on that. Its plan to vaccinate kids ages 5 to 11 hinges largely on distributing shots in pediatricians’ offices and schools, capitalizing on the trust parents often inherently hold for those institutions. “You are so often the people that folks want to hear from,” Murthy said on the May call with pediatricians and community leaders. “Your story, your outreach, can make all the difference in helping people get the information they need … and ultimately take that step of protecting their children.”

Dr. Tyree Winters, a New Jersey-based pediatrician, says he and his colleagues have been fielding questions from parents of older children for months, and he expects that to continue once younger kids can get the shot. Parents—even those who are vaccinated—often come in with concerns about their children experiencing vaccine-related side effects, or worried about misinformation they’ve read online. (The incorrect idea that the shots can cause infertility is a big source of hesitation, he says.) Some are just plain uncomfortable with giving their kids a fairly new vaccine, even if they were willing to get it themselves.

Getting through to these parents requires a balance of empathy and careful explanation of the science behind the vaccines, Winters says. “I let them know, ‘You’re not crazy, you’re not being over-dramatic, you’re not being unreasonable,’” he says. “That’s the beauty of being a pediatrician …we can relate to our patients and our families.”

Dr. Kelly Moore, CEO of the pro-vaccine Immunization Action Coalition, agrees that pediatricians can get through to many parents. But “not all children have a regular health care provider that they see, and public education through school systems will be important to reach families more widely,” Moore adds. Offering the shots in schools will also improve access to them, particularly for families that do not have a strong relationship with the traditional health system or parents who can’t take time off work to bring their child to a vaccine clinic.

The desire to keep kids in school can also convince some parents to vaccinate, says Dr. Sherri Young, who led adult and adolescent vaccination efforts in West Virginia’s Kanawha County. By mid-September, just a few weeks into the 2021-2022 school year, more than 1,800 U.S. schools had already experienced COVID-related closures, according to CDC data. That’s something both parents and kids want to avoid—and pitching vaccines as the way to do that can be effective, Young says.

Still, there are some parents who don’t believe their children need to be vaccinated, given the low rates of serious illness and death among people 18 and under. Others, concerned by reports of rare heart-related side effects among young people, think the risks of vaccination outweigh the benefits.

In authorizing Pfizer’s shot, the FDA said the opposite is true. The vaccine appears more than 90% effective at preventing symptomatic infections among 5- to 11-year-olds, and no serious side effects have been reported among a group of more than 3,000 kids who participated in trials. The CDC’s advisory group will soon discuss in more detail whether certain groups of kids should or should not get the shot.

Moore says the recent Delta-related spike in cases should show parents that there is serious benefit to vaccination. It remains true that children develop severe disease much less often than adults and die from coronavirus even less frequently—but images of overflowing pediatric ICUs and kids on ventilators from this past summer prove that the worst does sometimes happen, she says. Vaccines drastically reduce that risk.

Getting parents to understand that could not only save their children’s lives, but also help the U.S. finally put the worst of the pandemic in the past. 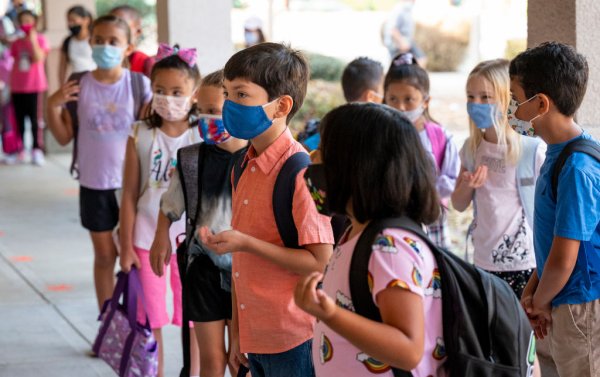 Why You Should Vaccinate Your Kids Against COVID-19
Next Up: Editor's Pick