Amanda Seyfried Is Heartbreaking in A Mouthful of Air, a Harrowing Story About Postpartum Depression

The movies that are hardest to watch for emotional or personal reasons—those that walk right up to anguish and look it straight in the eye—are also the ones that are almost impossible to get made. It’s a small miracle that writer-director Amy Koppelman’s A Mouthful of Air—which Koppelman adapted from her novel of the same name—exists at all. Amanda Seyfried plays Julie, a young New York City mother and children’s book author who, in the early moments of the movie, attempts suicide. She has been struggling with postpartum depression, her suffering too much to bear. Her husband, Ethan (Finn Wittrock), is supportive but bewildered. No one around Julie seems to know how to help, because no matter how deeply they care for her, they really can’t.

That’s a lot of intensity for a movie to carry, and Koppelman—making her debut as a director—approaches the task with sensitivity and discernment. (The suicide scene is a case in point—it’s so discreetly shot that the event becomes harrowing only in retrospect.) That’s essential, because postpartum depression—a subject no one wants to talk about, often least of all the people suffering from it—is infinitely complex and manifests itself in myriad, insidious ways. The problem, maybe, is that movies—or any kind of narrative—can’t help searching for answers, and A Mouthful of Air is no exception. The film suggests that Julie’s tendency toward depression was somehow inherited from her troubled and possibly abusive father (Michael Gaston), or perhaps intensified by memories of some childhood trauma. It’s a sort of vague hand-waving in the direction of an explanation that the story doesn’t need. The reality, even more troubling than any possible cause and effect, is that postpartum depression can emerge seemingly from nowhere.

But A Mouthful of Air makes it past those potential flaws on the strength of Seyfried’s performance. To look at her face—to watch as her delight in her son shifts almost imperceptibly into a private hell—is enough. Seyfried’s pre-Raphaelite fragility is a ruse; her fearlessness lies beneath the surface, a stealth weapon. As Julie, she shows us how the work of taking care of a small child, of being an engaged and attentive wife, of cooking up ideas for her next book, is the thing that sustain her. Terrifyingly, she also shows us glimpses of the dark little passageway leading her away from all that she cares about. From the outside, we want to reach in and pull her back; the impossibility of that is what gives the movie its power.

Another of Koppelman’s novels, I Smile Back, was adapted by director Adam Salky a few years ago: Sarah Silverman gave an astonishing, and underappreciated, performance as a wife and mother struggling with depression. Movies like that one, and like A Mouthful of Air—stories about humans with real-life problems—are what thinking adults always claim to want. Yet almost no one rushes to see them. The consolation, maybe, is that they exist so the right people can find them—eventually, if not right away. Movies aren’t service pieces, or instructional briefs, or delivery systems for problem-solving diagnoses. They can’t help you lead a better or healthier life, at least not in any obvious way. But they can help you see into corners of life you’ve been afraid to explore, or deepen your capacity to comprehend suffering that you’ve never experienced yourself. They open a window from one life into another. And that’s as good a reason for a movie to get made as any. 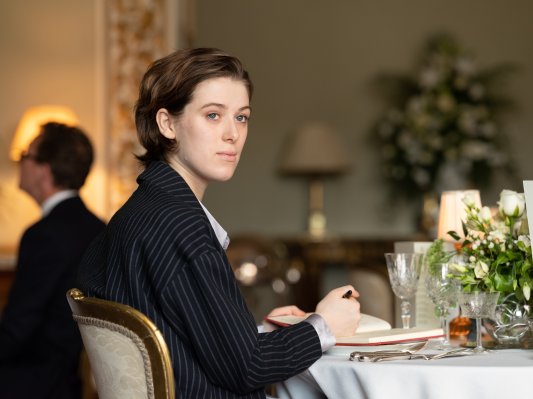 The Souvenir Part II Captures the Ragged Beauty of the 1980s Like No Other Film
Next Up: Editor's Pick