As Democrats inch closer to finalizing their large social policy bill that includes targeted benefits for middle- and working-class families, 3- and 4-year-olds, and older Americans, another population is poised to receive a windfall: undocumented immigrants.

At least $100 billion of the Build Back Better Act’s budget will go to immigration-related issues, including expanding legal representation for immigrants and bolstering the asylum system, according to a White House plan. But an even bigger potential boon is buried in the fine print: the bill could provide temporary protections and a work permit—a program known as parole—to as many as seven million undocumented immigrants, and an expedited pathway to green cards, through visa recapture, for as many as two million more. The bill could also restore families’ access to the Child Tax Credit (CTC), providing roughly a million undocumented children with support.

While these three programs—parole, visa recapture, and the restoration of the CTC for undocumented kids—remain in current drafts of the bill, their ultimate fate remains unclear. Whether they become law depends on the Senate Parliamentarian’s deliberations, the Democrats’ ongoing negotiations, and a final vote.

The Democrats’ original proposal included a much more ambitious pathway to citizenship. But if what’s left in drafts of the whittled-down bill passes, undocumented immigrants will still have reason to celebrate, immigrant advocates say. “It’s certainly different from what the President originally proposed,” says Kerri Talbot, deputy director of the Immigration Hub, an immigrant advocacy organization. “But I think it’d be a huge step forward and a major breakthrough to allow seven million people to work and live in the U.S.”

A reprieve for seven million

Some 7,081,000 undocumented people who have lived in the U.S. since at least January 1, 2011 would be eligible for the parole program as it’s currently outlined in the Build Back Better Act, according to the Center American Progress (CAP), a progressive policy institute. That’s a large slice of the roughly 10.5 million undocumented people who are currently living in the U.S. “Getting just over seven million people legal status, the vast majority of whom have never had [a legal] status—I mean, that is an incredibly big deal,” says Philip Wolgin, managing director of immigration policy at CAP.

The parole program still faces an administrative hurdle: because Democrats are passing the Build Back Better Act through a budget process known as reconciliation, the Senate Parliamentarian must determine whether parole can remain in the final bill according to Senate rules.

While parole is not a pathway to citizenship, advocates note, it’s a crucial first step. Immigrants on parole would enjoy protection from deportation and, on a case-by-case basis, a work permit. Parole works in much the same way as Deferred Action for Childhood Arrivals (DACA), the Obama-era executive action program that provides protections for some two million people brought to the U.S. as children. But unlike DACA, which has been challenged repeatedly in court, the parole program would pass as a provision of legislation—making it much less vulnerable legally, says Talbot.

In the current House version of the bill, Democrats have included a provision allowing immigrants to access green cards that have gone unused, usually because of bureaucratic delays, dating as far back as 1992. Depending on how the program is implemented, more than 2.2 million visas could be “recaptured” in order to reduce backlogs and wait times by as much as 20 years, according to calculations by David Bier, a research fellow at the Cato Institute, a libertarian think tank. For someone “at the back of the line,” Bier says, “this would be a monumental difference.”

This provision faces the same hurdle as the parole program: it must pass muster with the Senate Parliamentarian. Experts disagree on its prospects. Talbot says “we can definitely get to a yes with the Parliamentarian,” but Bier remains “skeptical.” Other attempts to include green cards in reconciliation have failed.

Support for a million more kids

Before 2017, all children with parents who met income requirements, regardless of citizenship, were eligible for the CTC. Parents could declare dependents using either a child’s Social Security number or individual taxpayer identification number. The Trump Administration changed the rule, explicitly excluding some one million children without a Social Security Numbers from pandemic-related CTC support. The provision in the current bill would restore the pre-Trump criteria.

“We are encouraged to see the Build Back Better Act framework restore equitable access to this critical economic support for families, regardless of immigration status,” says Avideh Moussavian, director of federal advocacy at the National Immigration Law Center, a national immigrant advocacy organization, in a statement to TIME.

Whether this restoration remains in the bill’s final text will again depend on the Senate parliamentarian’s ruling and on-going negotiations among Democrats.

If all of these three provisions become law, they would transformational for millions of undocumented immigrants living in the U.S. While immigrant advocates say it’s not enough to declare victory — they would likely continue to pressure the administration to create a direct pathway to citizenship — incremental provisions such as these are crucial. “You do things piecemeal, you fix one part, you fix another part, and then when the sky doesn’t fall,” says Wolgin, “that helps to build the case then for the broader legalization.” 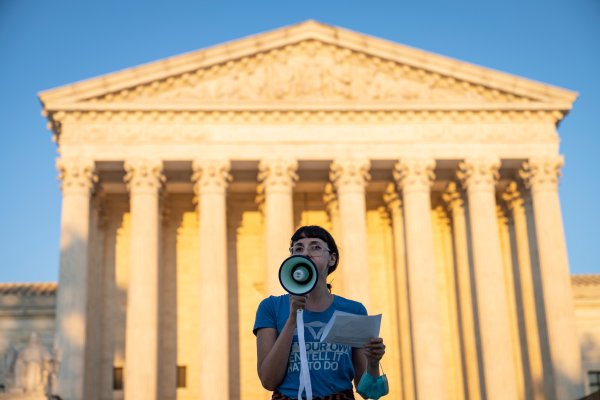 The Supreme Court Is Set to Hear the Texas Abortion Law
Next Up: Editor's Pick