DACA recipients and their supporters rally outside the U.S. Supreme Court on June 18, 2020 in Washington, DC.
Photo by Drew Angerer/Getty Images
By Jasmine Aguilera

Brian De Los Santos struggled to get to sleep on Wednesday night as he and his husband worried about what the outcome of the next day’s Supreme Court ruling on the Deferred Action for Childhood Arrivals (DACA) program could mean for them. De Los Santos is a DACA recipient who came to the U.S. from Mexico at age two, while his husband is undocumented.

But on Thursday morning, De Los Santos awoke to news that the Supreme Court ruled in favor of allowing the DACA program to remain in place, and let out a sigh of relief.

“I turned to my husband and I told him, ‘I’m safe,'” De Los Santos tells TIME. From Monday’s Supreme Court ruling protecting LGBTQ workers from workplace discrimination, to Thursday’s decision that DACA will remain, he adds it’s been an “overwhelming” week.

De Los Santos, a 29-year-old digital strategist for the Desert Sun newspaper in Palm Springs, Calif., is now one of an estimated 650,000 DACA recipients who can continue living and working in the U.S. for the foreseeable future without fear of deportation.

“I’ve worked so hard to get where I’m at, and had the ruling gone differently, had the Supreme Court ruled against DACA, then all my world [would be] gone,” he says. “I’m taking every little win with a smile…If the Trump Administration decides to find another way to dismantle the DACA program, that’s a moment we’ll have to face at that time. If there’s anything that immigrants always are, it’s that we’re ready.”

The justices ruled in a 5-4 decision that the Trump Administration did not properly pursue the legal channels to end the program, which began during the Obama Administration in 2012. “The dispute before the Court is not whether [the Department of Homeland Security] may rescind DACA. All parties agree that it may,” wrote Chief Justice John Roberts in the majority opinion. “The dispute is instead primarily about the procedure the agency followed in doing so.”

In response to the ruling, DHS acting director Chad Wolf said the program was illegally implemented by the Obama Administration, which used executive power to launch it. “DACA recipients deserve closure and finality surrounding their status here in the U.S. Unfortunately, today’s Supreme Court decision fails to provide that certainty,” he said in a public statement.

According to the Migration Policy Institute, an estimated 1.3 million people are eligible for the DACA program, people often referred to as “Dreamers.” The undocumented population in the U.S. is estimated to be approximately 11.3 million overall.

“There will always be attacks on our immigrant community, so we always have to be ready,” says Vanessa Luna, a DACA recipient and cofounder of ImmSchools, a nonprofit that supports undocumented students and families. “DACA is a Band-Aid to a larger issue…so long-term, we need comprehensive immigration reform.”

Esder Chong, a 22-year-old DACA recipient in Middlesex County, N.J., says she’s now hopeful the DACA ruling will enable her to complete her upcoming graduate studies as a Schwarzman Scholar, which might require her to move to China. “It seems like such a small thing to be joyful about, but for me it’s everything because there was a huge uncertainty of even finishing this program because of my status,” she tells TIME.

Chong and her parents moved to the U.S. from South Korea for missionary work when she was 6 years old. In 2008, their visas ended, and Chong became undocumented. DACA recipients do not qualify for federal grants or student loans to go to college, but she was able to pay for her undergraduate education at Rutgers University through private scholarships.

Other young DACA recipients who can’t access scholarships or can’t afford to pay out of pocket often learn that obtaining an education is out of the question. That was the case for Ramon Sanchez, a 23-year-old DACA recipient who lives in Dallas. Sanchez moved to Mt. Pleasant, Texas, from Mexico when he was about 6 years old and obtained DACA status when he was 16, allowing him to work retail jobs. In high school, his dream was to get an art degree at the Art Institute of Dallas. While touring the school, a tuition counselor broke the news that he wouldn’t qualify for federal student aid, taking college off the table. “That really kind of broke me down,” Sanchez tells TIME. “This is something that I’ve always wanted, almost at my fingertips.”

Sanchez, now a proud manager at the largest AT&T branch in Dallas, says his DACA status expires in May 2021. Before the Supreme Court ruling, he was unsure what would happen when his time ran out. “I just felt such a great joy,” he says of learning of the ruling. “It’s almost overwhelming…It just leads me to believe that there is hope, there’s hope for us Dreamers, there’s hope for us minorities, and there’s hope for our future.”

Despite Thursday’s ruling, the possibility still looms that the Trump Administration could find another path to ending the DACA program. President Trump tweeted Thursday after the Supreme Court ruling that “As President of the United States, I am asking for a legal solution on DACA, not a political one, consistent with the rule of law. The Supreme Court is not willing to give us one, so now we have to start this process all over again.”

Luna believes the threat would lessen if Trump were voted out of office. “Right now we’re celebrating, but there’s also this humongous possibility to do more for our community,” she says. “This is a moment of joy, but think we also have to recenter ourselves in the longer fight.”

Both Luna and Sanchez add that the current Black Lives Matter movement has also uplifted undocumented people, and activists are motivated to push back against any attempt to rescind the program.

“The immigrant rights movement has been able to get this far because of the work of Black liberation and the Civil Rights Movement,” Luna says. “We stand on their shoulders…so we’re standing with our Black community, many who are Black undocumented immigrants.”

Sanchez adds that he believes there’s enough pressure on the Administration at this moment from the Black Lives Matter movement and other members of historically oppressed communities to stop officials from trying to rescind the DACA program again anytime soon.

“The community is strong. We all love each other, we support each other and we all are absolutely here for each other,” Sanchez says. “There was a time where I felt alone in this, but I’m just a tiny little grain of sand in this huge beach of people just like me…I’m proud to be a Dreamer.” 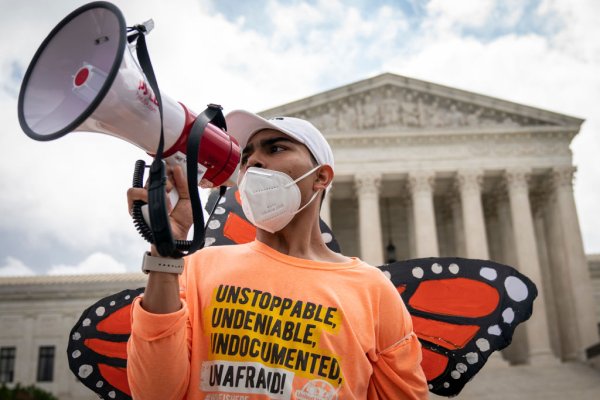 The Supreme Court Has Sided With DACA Recipients, For Now
Next Up: Editor's Pick