The marriage of the former princess Mako Komuro, niece of Japan’s Emperor Naruhito, and her long-time partner, the commoner Kei Komuro, was without the usual pomp and ceremony of royal nuptials. Instead, the couple simply announced their union at a press conference in a Tokyo hotel on Oct. 26.

Nobody was surprised by the low-key approach. Earlier this month, officials of the Imperial Household Agency said that Mako was suffering from post-traumatic stress disorder due to “excessive media coverage” of her relationship with Komuro since its beginnings in 2017. Press interest became frenzied after a financial scandal involving Komuro’s mother and the mother’s ex-fiancé came to light in early 2018.

Women in monarchies are regularly thrust into the spotlight. Sometimes, this attention comes at the expense of their well-being, with the most recent notable case being Meghan Markle and her struggles with U.K. tabloids and alleged racism within the British royal family.

Neither is Mako the first female member of Japan’s royal household to be reported as suffering extreme stress. The Emperor and his family—tradition says they are descendants of a female Shintō sun deity—are esteemed by many Japanese as national symbols. The imperial women are expected to uphold rigid roles, emblematic of the patriarchal attitudes rife in a society ranking 120th out of 156 countries in the Global Gender Gap Index, and where mental health issues, unsurprisingly, skew female.

Women and the Japanese royal family

Although the post-war constitution stipulated gender equality in Japan, its imperial women are still expected to embody conservative values, says Kayama Rika, a professor and psychiatrist at Rikkyo University in Tokyo. She explains that any deviation from tradition—such as wearing clothes that are too fashionable, or going to convenience stores—can potentially provoke criticism.

“The imperial family is the longest established family in Japan so many Japanese see in them the ideals of Japanese tradition,” Kayama tells TIME.

The imperial women are also expected to maintain patrilineal succession to the Chrysanthemum Throne by giving birth to male heirs. Women cannot inherit the throne themselves, and a female royal who marries a commoner loses her title and noble status, as in the case of Mako.

“If you add up that legal disability that’s unique to the imperial family’s women, with the intense media scrutiny, and the incredible degree of control that they’re subjected to from a very conservative, elderly, masculine government, I think those women are exposed to pressures that would actually be unfathomable to most people in Japan, or outside Japan,” says Kristin Roebuck, an assistant history professor at Cornell University in New York.

Japan's Empress Masako attends a ceremony to mark 100 years since the founding of the Meiji shrine in Tokyo on October 28, 2020.
BEHROUZ MEHRI/AFP via Getty Images

But stresses mounted after Akihito’s ascension to the throne in 1989. The popular press ran stories that criticized her for trivial issues such as reportedly asking for meals at 2 a.m., or her supposed rudeness to staff. This came to a head in 1993, when Michiko briefly collapsed on her birthday, after which she did not speak for two months. Doctors attributed her muteness to “deep sadness” caused by negative press. The empress described herself as “greatly saddened and bewildered” by “untruthful news reports.”

Empress Masako, the wife of Emperor Naruhito, was also hounded by the Japanese media for not giving birth to a son—which led to her disappearance from the public eye.

The third commoner to marry into the royal family, Masako Owada was a Harvard University graduate with a promising career at the Ministry of Foreign Affairs when she met then Crown Prince Naruhito in 1986. Historian Christopher Harding, a lecturer at the University of Edinburgh, explains in his book The Japanese that Masako had apprehensions about marrying Naruhito but relented in 1993, effectively putting an end to her diplomatic ambitions.

“Empress Masako found that her main duty was to produce an heir, and that strict protocol, linked to the constitution, meant that in press conferences she was barred from sharing her thoughts on anything that could be considered political,” Harding tells TIME.

After eight years of marriage, she gave birth to Princess Aiko, who remains the couple’s only child. The Imperial Household Agency attributed her long absence from imperial duties to an adjustment disorder, linked to stress.

Princess Mako of Japan leaves the Akasaka Palace for a press conference on October 26, 2021 in Tokyo, Japan.
Yuki Tanaka/Getty Images)

Female royals in the public eye

For Shihoko Goto, an expert on Japan and senior Northeast Asia associate at the Wilson Center in Washington, what happened to Mako was not criticism but public bullying. There should have been no controversy about her marriage to Kei Komuro.

“The most remarkable thing about him today is really that he captured the eye of the princess,” she explains. “The public has been quick to be very judgmental about it.”

Mako, tellingly, is now the ninth postwar princess to leave the imperial family after marrying a commoner. She will fly with Komuro to New York in hopes that their new life there will be quieter, but her experience serves as a warning to any woman thinking of joining the royal family when the emperor’s 15-year-old nephew, Prince Hisahito, reaches marrying age.

For the psychiatrist Kayama, the weight of expectations is too much to bear.

“I think the royal family is a system which makes people unhappy,” she says. 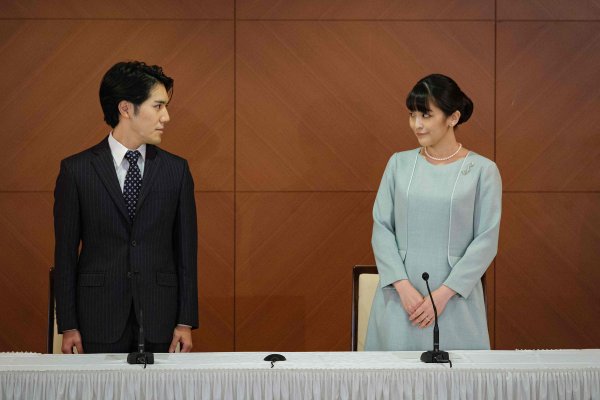