One Very Big Problem With the Democrats' Billionaires Tax

Some of the darkest instincts in politics have been given permission with the simple act of dehumanizing someone or someones. It’s surprisingly easy to lash a political rival when you forget they’re someone’s son or daughter, a parent or spouse. If you want to discount a candidacy, you can reduce its supporters to ignorant fools who, in the words of one candidate, cling to guns and religion as a refuge from a modernizing world, or from the mouth of another are characterized as nothing but takers. When the other side is treated as The Other, it demands zero respect and makes it easy to persecute them for political gain. So much of human history is animated by this exploitation.

Well, as Washington is hurtling toward fast-approaching deadlines and scrambling to solve a riddle over infrastructure spending, Democratic lawmakers seem to have found the latest incarnation of The Other. This time, they are roughly 700 uber-rich Americans and the assets that grow in value every year and make their largess even more obscene. Today, Sen. Ron Wyden of Oregon released details of his plan to target the nation’s very richest billionaires and tax their investment gains as a way to pay for some of the spending in Biden’s Build Back Better agenda.

Americans have long held a simultaneous fascination and a contempt for this class of billionaires. From Daddy Warbucks to Donald Trump, the mystery of vast wealth has sparked the imagination of the public. They’re a cut above, a cohort of some who have risen to the top of their professions and others who inherited their position through birth. The haves are easy targets for the have-nots or even the have-enoughs. And, in that, Democrats might have found a way out of the trap they’ve laid for themselves in chasing trillions of dollars for social safety spending that they insist will be completely paid-for without adding red ink.

Under Wyden’s plan, anyone worth $1 billion or more would face a one-time tax on wealth they’ve accrued. For instance, if someone bought $1 billion in stocks and those shares are now worth $5 billion, that person would be assessed as having made $4 billion and face a tax bill on those shares, even if they were never sold. Then, going forward, the IRS would send a tax bill annually for further gains. That $5 billion investment going to $6 billion would show as $1 billion in income. Losses could be carried over for a while, but the proposal clearly assumes accumulating wealth and not a massive crash like 2008 or even big dents resulting from threats of a government shutdown.

But there’s one fairly big problem here: it’s potentially illegal. The Constitution has a pretty narrow tolerance for taxes, even after the Sixteenth Amendment remedied an 1895 case that declared income taxes unconstitutional. For one, wealth isn’t income. When something gains value but isn’t sold, it’s a theoretical increase in an individual’s buying power. The argument behind Wyden’s plan is that you could be buying that yacht, so you should pay taxes on that ability even if you’re still sitting on the mountain of cash. It’s not clear the Supreme Court would agree.

In practice, of course, the super-rich have found ways to use that theoretical wealth to fund their lifestyles. They can park their money in an account that keeps growing and then borrow against it to pay for their day-to-day costs, like private jets and islands. It’s how PayPal founder Peter Thiel has a Roth IRA reportedly valued at $5 billion. So the latent asset could be seen as taxable in this scenario. And that’s what Democrats are—if you’ll pardon the pun—banking on.

To be clear, billionaires aren’t a class of victims. But they are an easy target to pay for Democrats’ ambitious—and as yet amorphous—plans for a new social safety net. Billionaires already pay a far lower share of their wealth annually than the rest of us. The bottom 99% of Americans turn about 7% of their net worth to governments. The top 0.1% send less than half of that to Uncle Sam. It’s the exact opposite of a progressive tax system and a rub on populists in both parties.

But the idea remains one set for debate, not passage. “There’s a patriotic duty that you should be paying something to this great country that gave you the protection and the support and the opportunities,” Manchin told reporters on Capitol Hill today. But, like a lot of Democrats, Manchin said the so-called Billionaires’ Tax seems to be more of an idea than an actual policy at this point. “I don’t like the connotation that we’re targeting different people,” said Manchin, who in a 50-50 Senate can single-handedly veto any part of this infrastructure deal.

But they are targeting a specific class, at least in the plan’s current iteration. On top of the questions about the constitutionality of taxing wealth, the proposal triggers a second constitutional question: Can a law legally target a specific person or group of people? The Constitution explicitly bans laws passed targeting a specific person. For instance, Congress cannot pass a law declaring Citizen Z guilty of a crime in the absence of a trial. That, courts have agreed, is very British in its bill of attainder origins. The Supreme Court has largely agreed, especially if such laws are seen as punitive, as was the case of Communists being banned from labor unions’ leadership during the Cold War.

Yet there is a window whereby the Supreme Court might allow for Wyden’s plan, and it dates to Congress passing a law during Watergate demanding the federal caretakers seize Richard Nixon’s presidential papers so they couldn’t be destroyed. In that case, the Supreme Court ruled that Nixon was not being punished and his compensation for the records negated any perceived penalty.

The likes of Jeff Bezos or Elon Musk aren’t much more sympathetic than Nixon right now. But that doesn’t mean Congress has a blank check to confiscate their wealth to pay for new social programs without risking some political price. And that’s what Congress is considering right now: Is paid family leave worth risking the ire of billionaires who can unleash a torrent of retribution? After all, declarations of hostility aren’t a one-way road.

You could hear Musk hinting at as much in a series of tweets in recent days. In response to one tweet criticizing the billionaire bashing, the world’s richest man replied with a warning: “Eventually, they run out of other people’s money and then they come for you.” And, in that, Musk turned the tables on Congress. Lawmakers, in his telling, are now The Other—and thus just as contemptible as his billionaire pals. 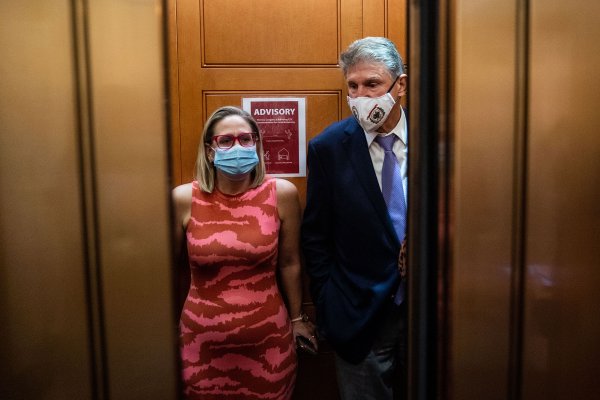