Missing Leaders, Eyewatering Hotel Rates and a Resurgent Pandemic Could Derail the Most Important Climate Summit in Years

The stakes at COP26, the U.N. climate summit that begins Nov. 1 in Glasgow, couldn’t be higher. U.S. climate envoy John Kerry has called the summit the world’s “last best hope” to avoid the worst consequences of climate change. Over two weeks, some 20,000 delegates representing 195 countries will try to resolve significant differences on how the world should cut its greenhouse gas emissions, with the aim to “keep 1.5°C alive.” That is, to meet the Paris Agreement’s target of limiting global average temperature rise to 1.5°C over the preindustrial era by 2050, after which point climate change will likely reach catastrophic proportions .

But the hope already seems to be fading among politicians and campaigners, with a week still to go before delegates step foot inside Glasgow’s Scottish Event Campus. Political obstacles to success at the conference are mounting. Many world leaders of major emitters are declining to attend. Developing countries face major costs and barriers to participate. The U.K.’s COVID-19 transmission rates are near an all-time high. And there are doubts over preparation for the summit; according to The Guardian, a group of major COP26 sponsors recently wrote to organizers condemning the event as “mismanaged” and “very last minute,” blaming “very inexperienced” civil servants for the problems.

Officials are already tamping down expectations for the COP26 outcome. U.S. climate envoy John Kerry told the AP that “there will be a gap” between countries’ emissions commitments at the summit and the reductions needed to reach the Paris agreement’s goals. British prime minister Boris Johnson, normally an enthusiastic booster, conceded this week that negotiations will be “extremely tough.” Last month he said that there is only a “six in 10 chance” that rich countries will fulfill their promises on climate aid.

“It’s been definitely more challenging from the outset than any other COP,” says Yamide Dagnet, climate negotiations director at the World Resources Institute and a former E.U. COP negotiator. “Securing the outcome is going to be the most challenging of any COP [in over a decade].”

The most expensive COP on record

Climate advocates say developing countries, many of which are being hit hardest by climate change, are finding it unusually hard to attend this year’s COP because of pandemic travel restrictions and extraordinarily high costs in Glasgow. The “defacto exclusion” of poorer delegates prompted the Climate Action Network (CAN) , which represents around 1,500 climate civil society organizations globally, to call for COP26 to be postponed last month.

Critics say the U.K. has failed to control spiralling costs of attending the summit, which have forced smaller countries, as well as NGOs including the World Resources Institute, to scale back the size of their presence at the conference, making it harder for them to represent their interests.

As early as January local media reported that hotels and rental apartments had begun hiking prices for November bookings to around 500% of the norm. As of Oct. 22, the cost to rent a one-bedroom apartment in Glasgow for the duration of the conference was around £6,000, according to advertisements on booking.com, and no hotel rooms were available. The price of hosting events inside the COP26 venue is also higher than at previous summits, in part due to labor and supply shortages related to Brexit and the pandemic. According to the Financial Times one scientific organisation was quoted nearly £500,000 for the cost of building and running its pavilion.

One former developing country negotiator, who has been to over 20 previous COPs, says that Glasgow is the most unaffordable COP she has ever attended.

Many COP participants say the high costs stem in part from the U.K.’s decision to host COP26—likely to be the most attended COP since the 2015 summit in Paris— in Glasgow, rather than in a larger city like London. Glasgow has only around 11,000 hotel beds, compared to around 156,000 in Paris and 59,000 in Madrid, the site of COP25 in 2019.

COVID-19 travel restrictions also threaten participation of the countries that are most vulnerable to climate change. A third of Pacific Island nations have said that they will be unable to send delegates to COP26 because the long quarantines required to return home would put senior officials out of action for too long.

The U.K. has taken steps to make it easier for developing countries to send delegates, including offering to vaccinate all delegates for free. After pressure in September, the government drastically cut down its travel “red list” which requires arrivals from some nations to quarantine for 10 days in hotels, and agreed to pay for COP26 attendees’ hotel quarantines.

But Tasneem Essop, executive director of CAN, says that only one of the 11 people who applied to the U.K.’s vaccination program via her organization received a vaccine through the program.

The limited number of vulnerable country representation at COP26 will have a direct impact on negotiators’ ambition on emissions reductions, and on the attention given to issues like aid to help poorer countries adapt to climate change and recover from climate disasters, Essop says. “Rich nations are in a far more advantageous position given that they will have massive delegations coming in. The imbalance of voices will make it harder for the needs of vulnerable countries of poor developing countries to be heard.”

Activists dressed as debt collectors" hold cutouts of the leaders of Italy, U.K., the U.S., Australia and Canada during a demonstration in front of the International Monetary Fund headquarters in Washington D.C. to ask rich nations to keep their commitment to support developing countries to tackle climate change on October 13, 2021.
Pedro Ugarte—AFP/Getty Images

Difficult conditions on the ground

For delegates that can actually get to Glasgow, conditions will be unusually tough. Rail workers and trash collectors in Glasgow have announced that they will go on strike during the summit amid disputes over pay, and bus drivers are considering doing the same. The U.K.’s COVID-19 transmission rate has surged in recent weeks to one of the highest in the world, endangering unvaccinated delegates and heightening the risk of an outbreak that disrupts the summit.

“I think the outside world may struggle to comprehend the level of effort that negotiators put in to be mobilized for up to 12 or 20 hours, not even not sleeping much [towards the end of the summit] to reach a breakthrough,” says Dagnet. “Wearing masks during all that time is going to be really difficult. And because this is really two COPs in one, the sheer volume of issues on the table, they won’t get any breathing space between meetings.”

Concerns over the organization raised by sponsors—and the need for COVID screenings for the 20,000 participants—have stoked fears among observers that Glasgow could be a repeat of the 2009 Copenhagen COP, when “disastrous” organization led to delegates queuing for hours outside in freezing temperatures and snow. The summit ended in marked failure.

These logistical problems may seem trivial, but former negotiators say that the smooth running of the summit can be crucial to negotiators’ success. “It’s a well-established historical fact that smoothly running COP logistics support positive outcomes in the negotiations,” says a member of the team that organized Morocco’s 2016 Presidency of COP22, who wished to remain anonymous to speak freely. “If afflicted by logistical challenges, negotiators may be less inclined to reach agreement.”

Once negotiators have overcome all the logistical barriers, they face one of the most difficult political panoramas for climate cooperation in years, Dagnet says. Geopolitical tensions remain high between Western leaders and major emitters like Russia and China. A global energy crisis has offered fossil fuel advocates a fresh opportunity to sow doubts over the speed of the energy transition.

Trust between the Global North and Global South is also nearing an all time low, after the hoarding of global COVID-19 vaccine supplies by wealthy countries during 2021. Vaccine inequity has compounded anger over a rich countries failure to fulfill a commitment, made more than a decade ago, to raise $100 billion in climate finance for poorer countries each year by 2020. In that context, developing countries may be less willing to compromise to reach consensus, Dagnet says. “If solidarity between countries is undermined by lack of trust, that’s going to degrade the prospect of a breakthrough even further.”

Expectations for the summit have also been marred by the news that the leaders of many of the major emitters who have shown the most hesitancy for climate action— including Brazil, Mexico, Russia and Japan—are likely to skip COP26. China’s president Xi Jinping, who has stepped up his country’s climate efforts in recent years, setting a net zero goal for 2060 and promising to end overseas coal funding, has confirmed he will not attend. Some observers expect he will save any further climate announcements for Chinese conferences, rather than sharing them at a Western-backed event.

The absence of Xi or Russia’s Vladimir Putin is not particularly surprising, and some previously hesitant heads of government—including Australia’s Scott Morrison and India’s Narendra Modi—have pledged to come in recent days. But COP26’s patchy guest list still suggests that the more enthusiastic global cooperation many had hoped to see after two years of increasingly visible climate impacts is not materializing.

For Essop, from CAN, though, the presence of world leaders is less important than the level of commitment their negotiators show behind closed doors, and the strength of the targets they set. “It’s going to take a lot of heavy lifting there to rebuild trust, to set us on course,” she says. “In the end, the test for all of this is, what are we actually delivering for those who are suffering the most? And that we will only know in the course of the COP itself.” 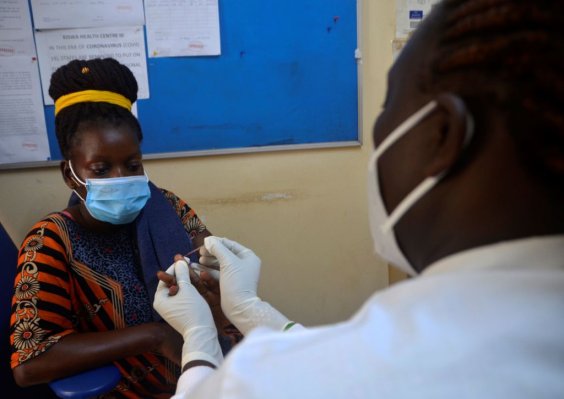