Brexit Is Still a Hot Mess

Loyalists march to Downing Street via Parliament Square to demonstrate against the Northern Ireland Protocol between the United Kingdom and the European Union on 9th October 2021 in London, United Kingdom. The Northern Ireland Protocol was agreed in Brexit talks between the UK and the EU in order to protect the 1998 Good Friday Agreement and it was implemented so as to avoid a hard border between Northern Ireland and the Republic of Ireland.
Mark Kerrison-In Pictures
Ideas
By Ian Bremmer
Bremmer is a foreign affairs columnist and editor-at-large at TIME. He is the president of Eurasia Group, a political-risk consultancy, and GZERO Media, a company dedicated to providing intelligent and engaging coverage of international affairs. He teaches applied geopolitics at Columbia University’s School of International and Public Affairs and his most recent book is Us vs. Them: The Failure of Globalism.

From the pandemic to President Joseph Biden’s election, the January 6 insurrection, and the vaccine rollout, a lot has changed in the last 18 months.

One thing that hasn’t? Brexit, Britain’s exit from the European Union, is still a hot mess.

The latest chapter in the saga has the British government threatening to go “nuclear” and invoke Article 16 of the Northern Ireland Protocol—not good for already tense U.K.-E.U. relations.

The Northern Ireland Protocol was designed to ensure the free flow of trade between Northern Ireland, the Republic of Ireland, and the rest of the E.U. The status of the land border between Northern Ireland (a part of the U.K.) and the Republic of Ireland (a part of the E.U.) was one of the key stumbling blocks to a withdrawal agreement between the E.U. and the U.K. In order to keep the north-south border open—essential to preserving the 1998 Good Friday Agreement, the peace accord that ended three decades of sectarian conflict—while preserving the integrity of the E.U.’s single market, the Protocol stipulated a customs and regulatory border down the Irish Sea, with any disputes to be settled by the European Court of Justice (ECJ).

The legal, political, and economic repercussions of triggering Article 16 would be dire.

Tensions between the E.U. and the U.K. increased following the latter’s publication of a “command paper” in July, asking the E.U. to rewrite the Northern Ireland Protocol and threatening to invoke Article 16 if Brussels refused.

Britain’s Brexit minister David Frost justified the move by citing the “diversion of trade” and economic and societal pressures caused by the E.U.’s implementation of customs and agri-food checks on goods moving across the Irish Sea. These checks have disrupted trade between Britain and Northern Ireland and caused major shortages in Northern Ireland. Frost’s demands included applying both U.K. and E.U. standards in Northern Ireland and rejecting Brussels’s demand for the U.K. to adhere to E.U. agri-food rules. The U.K. also demanded an end to the EJC’s role in policing the Protocol in Northern Ireland.

At that point it was clear that while Brussels was open to discussing implementation of the Protocol, it would not renegotiate it, thereby closing the door to any fundamental compromise over the role of the ECJ.

After a lengthy stalemate, on October 13 the E.U. formally responded to the U.K.’s demands with a proposal that went further than the U.K. government expected, easing 80% of border checks and doing away with half of the paperwork requirements. However, as expected, the E.U. did not offer any concessions on the role of the ECJ in policing the Protocol.

With this offer, the E.U. has put Prime Minister Boris Johnson in a bind.

Brussels is unlikely to fundamentally compromise on the ECJ’s oversight role, especially when it is simultaneously being challenged on this front by E.U. members (namely, Poland). This means that if Johnson wants a deal, he will have to back down from his demand to end the ECJ’s role in the Protocol, at significant political cost.

The alternative is to use Brussels’ refusal to concede as a pretext to invoke Article 16, suspend part of the Protocol, and blame the E.U. for any consequences. That course of action would risk an expensive trade war with the 27-nation bloc. While this prospect would take months to play out, a prolonged trade dispute would compound Johnson’s headache over supply chain disruptions in the lead-up to Christmas and worsen the government’s already strained relationship with the business community. A breakdown in relations with the E.U. would also damage the U.K.’s reputation as a country that can be trusted to negotiate in good faith and keep its word, undermining a key selling point of its “Global Britain” agenda. Additionally, it could damage relations with Biden, who describes himself as Irish and has expressed strong feelings about the Belfast agreement.

The U.K. will continue to play rhetorical brinkmanship for at least a few more weeks, holding off on triggering Article 16 while Frost tries to extract further concessions from European Commission Vice President Maroš Šefčovič.

Sooner or later, though, Johnson will have to make a particularly difficult decision: compromise and move on, or provoke a war the U.K. will lose. 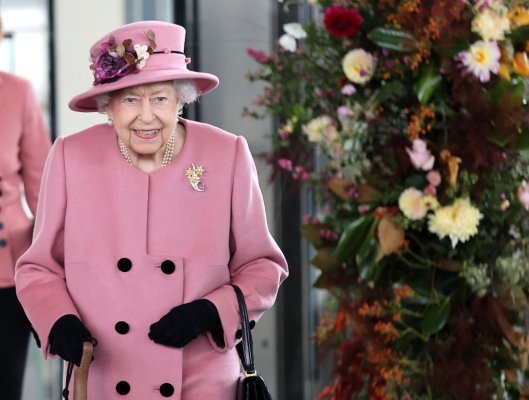 Queen Elizabeth and Greta Thunberg Are Sending the Same Message on Climate Change. Will World Leaders Listen?
Next Up: Editor's Pick