Russia Says Climate Change Is a Big Priority. But Its Real Goal at COP 26 Will Be Slowing Down Progress

When a Kremlin spokesperson announced last week that Russian President Vladimir Putin would not be attending the U.N. COP26 climate change conference in Glasgow in person, he wanted to make it clear that it wasn’t because Putin didn’t care. On the contrary, Dmitry Peskov told reporters, climate change is “one of our foreign policy’s most important priorities.”

As one of the countries most impacted by a warming climate, it should be. But as the Russian delegation, minus its leader, heads into next week’s COP26 negotiations over updated carbon emission reduction targets, it could well turn out that Russia’s priority is less about combatting climate change than it is about changing the narrative over how fast, and by how much, nations should reduce their greenhouse gas emissions.

Not only is Russia is the 4th biggest emitter of the greenhouse gases that are heating our planet past sustainable levels, its economy is heavily reliant on the exploitation of the hydrocarbons, like oil, gas and coal, that produce those emissions. It is the world’s largest exporter of natural gas, and fossil fuel sales account for 36% of the country’s budget, according to the Organisation for Economic Co-operation and Development.

Ambitious global targets to reduce emissions and diversify energy supply away from fossil fuel consumption threaten both the Russian economy and its influence on the geopolitical stage—Russia currently supplies more than a third of the European Union’s natural gas supply.

Read More: Villagers in Siberia, Facing Wildfires and a Warming Climate, Battle to Protect Their Homes

A global transition away from fossil fuels is, for Russia, “an existential threat,” says Candace Rondeaux, director of the Future Frontlines program at the New America Foundation in Washington, D.C. “The entire evolution of Russia’s foreign policy over the last 20 years has been predicated on leveraging Russia’s pole position as the leading fossil fuel producer in the world, right up there with the U.S. and Saudi Arabia.”

While Russian oligarchs may personally profit from investments in the country’s oil and gas, the rest of the country is reliant on the revenues they bring in. “Price stability in the fossil fuel sector ensures sovereign wealth and pays for pensions. It’s the backbone of the military industrial complex. And it is really one of the only means by which Russia can get a consistent stream of hard revenue streaming into the country,” says Rondeaux.

Russia is unlikely to actively disrupt the negotiations as countries hammer out their commitments, says Heather Conley, director of the Europe, Russia, and Eurasia Program at the Washington, D.C.-based Center for Strategic and International Studies, but they will be working hard behind the scenes to ensure that the timeline for all nations agree to move away from fossil fuels entirely is as far into the future as possible. “The Russians have a pretty clear economic strategy to 2030, and that is to pump out fossil fuels. [At COP] they will try to use all of their political and economic influence as a lever to slow down the move to renewables in order to buy time.”

Despite a global push for nations to zero out their greenhouse gas emissions by 2050—the world’s best chance for keeping temperatures from rising beyond 1.5 degrees Celsius—Russia has opted for a 2060 target, the same as China. (The U.S., the world’s second largest emitter of global greenhouse gasses after China, has agreed to the 2050 goal. India, which is third largest emitter, has not yet made a pledge).

But even with that delay, it is not clear how sincere the Russians are with their commitment. As part of their pledge, they committed to cutting their 2030 emissions to 70% of 1990 levels. While that may look impressive on paper, it is a relatively meaningless goal because of widespread deindustrialization following the breakup of the Soviet Union in 1991. In fact, say activists, Russia could increase emissions over the next eight years and still hit its target.

Read More: The Battle to Control the Narrative Over Climate and Energy Security is Heating Up

Russia certainly wants to project an engaged partnership to the global community, but it has also spent the past year expanding its petrochemical production facilities, and it has launched a new pipeline project and transport network that will see it double coal and gas exports to China. When the price of natural gas skyrocketed in Europe in early October, Putin suggested that the energy crisis was linked to Europe’s shift to renewable energy sources, and that a slower transition that focused on natural gas—Russian, of course—was the better option.

“The Russians have adapted their talking points to include a climate dimension, but it’s rhetorical,” says Conley. “Their actions—the doubling of fossil fuel exports because of their economic situation—demonstrate their reality. They are acknowledging [climate change] now, but they’re just not going to do anything about it.”

That may be because they can’t afford to. Russia will likely have a harder time decarbonizing than even China, says Nikos Tsafos, an energy expert at the Center for Strategic & International Studies. The coal, gas and oil exploitation industries are a key source of jobs in Russia, and the country has invested little in renewables that could provide alternative forms of employment. Nor does Russia have the same innovation push that has made China the world’s biggest producer of electric vehicles and solar panels.

Geography and climate further complicate issues. “This may sound silly, but Russia is a cold country,” says Tsafos. At the moment, Russia relies on tens of thousands of miles of pipelines to deliver heating gas to its far-flung population. “The real challenge for Russia’s decarbonization is not the political economy of hydrocarbons or even revenue. It’s keeping 140 million people warm in the winter using a different energy source. That’s not going to be easy,” says Tsafos.

Tsafos, whose work focuses on the world’s major oil and gas producers, says hydrocarbon states tend to go through distinct phases when it comes to the pending global energy transition. “The first stage is denial, and the Russians have gone through that. The second is the fire sale, where they recognize that hey, this resource may not be valuable in 30 years, so I should sell more of it now.”

The third phase, according to Tsafos, would be acceptance of the need to diversify. Russia seems to have other plans. On Oct. 20, Putin’s climate envoy Ruslan Edelgeriyev argued to Bloomberg that the state-run natural gas behemoth Gazprom should be exempted from sanctions if it was being called upon to reduce methane leaks, another source of greenhouse gas emissions. “Let’s take climate projects out of sanctions, so that Gazprom has access to green financing, access to technologies,” he said. Arguing that Gazprom counts as a climate project is a stretch.

Tsafos’ allusion to classic psychological studies on the five stages of grief skipped a step. Stage three is bargaining. Going into the COP26 negotiations, Russia is going to bargain as if its very existence depended on it. In a way, it does. 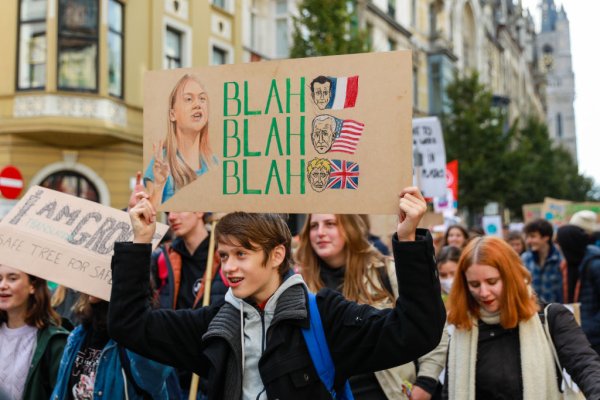 Why Hopes Are Fading for Glasgow's U.N. Climate Summit
Next Up: Editor's Pick