Data Drives the World. You Need to Understand It

Stengel is the former Editor of TIME, an MSNBC analyst and the author of Mandela's Way, a book about his work with the South African president, and Information Wars: How We Lost the Global Battle Against Disinformation.

We are living in the greatest information revolution in human history, even greater than the printing press. It’s estimated that 1.7 MB of data are created every second for every person on earth—the same amount of data needed to store an 850 page book, per second. Every day, more than 300 billion emails are sent, and Google processes around 6 billion requests. Every minute, YouTube watchers consume over 4 million videos. All told, some 2.5 exabytes of data is generated every day. One exabyte is a billion gigabytes, the equivalent to 3000 times the content of the Library of Congress. No wonder IBM reported that 90% of all the data in the history of the world was generated between 2010 and 2012, when social media began to take off.

And these numbers are growing exponentially, as you might expect when more than 6 billion people hold in their hand the most powerful information engine in human history. Today, scientists estimate that data will be consumed at a compound annual growth rate of 23% between now and 2025. Every swipe, search, text, keystroke, click, like and purchase creates more data. (And we haven’t even factored in The Internet of Things!) What’s more, the same machines that create all this information give us access to it: every person with a smart phone can access more information than anyone in history.

And yet a 2012 study showed less trust in science and facts than in the days before the Internet. Some may be overwhelmed, while some lack the basic skills to benefit from this information revolution: 43 million Americans have low literacy skills, and 8.4 million are classified as functionally illiterate. Average reading proficiency scores across the country have declined in the last ten years. That might begin to explain why, in the face of a worldwide pandemic, millions of people seem not to understand—or trust—the tenets of modern science. Another explanation surely is the tsunami of disinformation growing over the last ten years. As Peter Aiken and Todd Harbour write in their important and illuminating new book, Data Literacy, understanding about data seems to have stagnated. At a time when there is more data, more facts, more information—more knowledge—and all of it instantly available, millions of people are depending on intuition, superstition, and conspiracy theories.

Okay, let’s start at the beginning: What is data? And what does it mean to be data literate in a digital age?

Data are—it’s plural—units of information. In science, data are a body of facts, but in the digital world they are bits and bytes of information. As Aiken and Harbour note, data is unique (it keeps its value), non-depletable (you can’t use it up), non-degradable (it’s accessible forever), regenerative (it can be used over and over), and its cost diminishes with use.

What oil was to the industrial age, data is to the information age. It fuels the digital economy.

And what is data literacy? There are two very different kinds. One is knowing how to analyze and interpret data. It’s pretty traditional and means understanding data in a mathematical or academic sense. If every American understood data at the level of a high school statistics class, we might have far less of a vaccine hesitancy problem. For example, if you tell someone there have been more than 24,000 breakthrough infections, they may be shocked. But if you understand that’s only 1 in 5,000, or 0.02%, you realize that’s a very small number.

The second kind of data literacy involves understanding how the data economy works – especially the role your own data and information plays in it — and more specifically how people share data, how companies use your data, and how much your data is worth.

This affects pretty much everyone these days, but most people don’t like to think about it. One study showed that 74 percent of employees report feeling overwhelmed or unhappy when working with data. Yet data can and should enable people to make better and more informed decisions about every aspect of their lives. It can improve productivity and competitiveness. It should make us all better citizens. Without it, we are more susceptible to manipulation, misinformation, and disinformation, and that’s a threat to both society and our democracy. Just as universal education became a cornerstone of democracy in the early 20th Century, data literacy has become essential to 21st Century citizenship.

Data—your data—is what makes hundreds of billions of dollars for companies like Facebook and Google. Your data, all of it, has value and it’s making them rich. Online platforms and providers collect just about everything they can about you and analyze it for a variety of purposes: to optimize engagement (keeping you online); to personalize advertising (selling you things); to license to third parties (to sell you more things); to predict your behavior and that of others (to know what you might buy). There’s nothing too small for them to know. Every second you’re online or on your phone, you’re giving your data to someone who is monetizing it. Shoshana Zuboff has written that we are living in the age of surveillance capitalism.

But masses of people are not really aware of this. Millions of us have traded security and privacy for convenience. That’s a dangerous bargain. It opens us to manipulation, deception, and outright piracy. Hacks and ransomware attacks depend in part on data illiteracy. And they are growing. So be vigilant. Distrust and verify. Be careful about giving access to your data. Be skeptical of any requests for information. Don’t automatically give apps access to your location, your pictures, your contacts. Do so only when it makes sense. Why give a restaurant app access to your camera? You shouldn’t really give anyone full access to your contacts. Don’t open texts from people you don’t know. Everything you say or do online pretty much exists forever, so think twice about what you post or tweet.

But becoming data literate is not just about protecting your privacy and security. It’s about understanding the digital world that runs on the information we give it and it’s about protecting our democracy and our participation in it, as truly informed citizens. “Governments are instituted,” the Declaration says, “deriving their just powers from the consent of the governed.” Don’t consent to giving away your information and your privacy. Don’t consent to being fooled by the disinformationists. Use data to make better choices, choices that are both in your interest and the interest of the nation. Data is democratic. It’s available to all of us. Use it wisely—and don’t let others misuse it.

This essay was adapted from the foreward of Data Literacy: Achieving Higher Productivity for Citizens, Knowledge Workers, and Organizations, by Peter Aiken and Todd Harbour 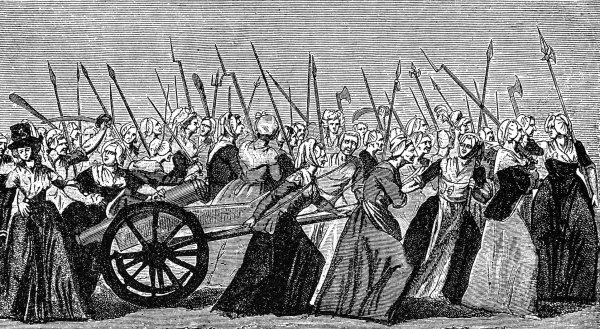 How Climate Chaos Helped Spark the French Revolution
Next Up: Editor's Pick