Europe's Youngest Democracies Are in Turmoil at the Worst Possible Time

Thousands attend a pro-EU demonstration at the Main Square in Krakow, Poland on Oct. 10, 2021
Beata Zawrzel—NurPhoto via Getty Images
Ideas
By Ian Bremmer
Bremmer is a foreign affairs columnist and editor-at-large at TIME. He is the president of Eurasia Group, a political-risk consultancy, and GZERO Media, a company dedicated to providing intelligent and engaging coverage of international affairs. He teaches applied geopolitics at Columbia University’s School of International and Public Affairs and his most recent book is Us vs. Them: The Failure of Globalism.

Europe’s youngest democracies are facing serious political turmoil. An unresolved election in the Czech Republic, a controversial court ruling in Poland, political stalemate in Bulgaria and a Hungarian government gearing up for a fight are all creating complex challenges for E.U. officials.

In the Czech Republic, the Oct. 8–Oct. 9 election has produced only confusion and the risk of a constitutional crisis. The party of populist Prime Minister Andrej Babis, a billionaire who rose to power by railing against elites, suffered a surprise defeat at the hands of the center-right Together coalition. But Czech law allows the President to decide who can try to form a government—and President Milos Zeman, a Babis ally who was taken seriously ill on Oct. 10, had previously said the party receiving the most votes should have that right. Babis’ party narrowly did that, but doesn’t appear to have the allies in Parliament to form a majority government. No one knows what will happen next.

In Poland, the country’s highest court ruled on Oct. 7 that within Poland, national law takes precedence over E.U. law, a direct rejection of one of the bloc’s foundational principles. Poland’s populist government was quick to embrace the ruling, which it had itself requested, but the public has divided sharply over the issue. Tens of thousands took to the streets across the nation on Oct. 9 to support the E.U.

This challenge is too direct for the European Commission to ignore, but its options are limited. It can try to strip Poland of its E.U. voting rights, but Hungary, an ally that has faced similar threats in recent years, would veto the move. The E.U. can move to withhold budget payments from the country until its government backs down, but that option would punish all of Poland’s people, including those who rallied in support of Europe.

There is also political turmoil in Bulgaria, which joined the E.U. in 2007, three years after the Czech Republic, Poland and Hungary. Public anger over rampant corruption forced former Prime Minister Boyko Borissov from power earlier this year, but parliamentary elections in April and July failed to produce a government. President Rumen Radev has called a third vote for November.

On the horizon is more trouble with Hungary’s Viktor Orban, a man who has already defied the E.U. to wage war on independent judges and reporters, opposition parties and refugees seeking asylum. Now, Hungary’s strongman is preparing for national elections next spring in which he faces an anti-Orban alliance that spans the political spectrum, from the Socialist Party to pro-business liberals to the formerly far-right Jobbik. The opposition wants to define Hungary’s choice as “Orban or Europe.” Current polls predict a close race.

These political deadlocks come at a time of shifting leadership at the heart of Europe. Germany’s Angela Merkel, who has helped preserve the delicate balance between pressure and engagement in relations with Europe’s smallest, youngest and most fragile democracies, is preparing to retire. Her replacement, probably Socialist Party leader Olaf Scholz, will try the same approach, but with less stature on the European stage. France’s President Emmanuel Macron will face his own battle for re-election next year, and some of his rivals will work to profit from French sympathy for those across the E.U. who want Brussels to have less power. Not a good moment for a leadership shortage in Europe. 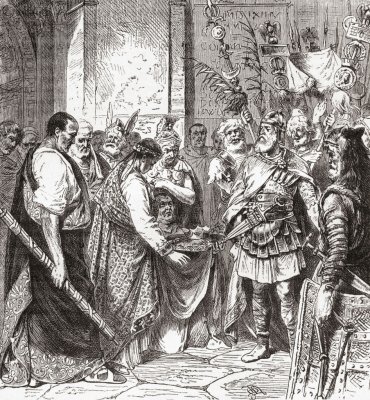 Rome Didn't Fall When You Think It Did
Next Up: Editor's Pick