Why We Can't Ignore Our Dreams

Ideas
By Sidarta Ribeiro
Sidarta Ribeiro is a founder and vice director of the Brain Institute at Universidade Federal do Rio Grande do Norte in Brazil, where he is also a professor of neuroscience. He received a Ph.D. in animal behavior from The Rockefeller University. He is the author of the book, The Oracle of Night: The History and Science of Dreams.

On Mar. 14, 44 B.C.E., Julius Caesar dreamed of flying up through the clouds, until being warmly received by Jupiter. His wife, Calpurnia, however, had a nightmare in which he got stabbed. The following morning, she urged him not to leave home, but he ignored her warning and was slaughtered. Both dreams were precognitive: while the ascent into heaven to be with the king of gods was a metaphor of Caesar’s death and subsequent divinization, the concrete images of his wife’s dream predicted the future in detail.

The notion that dreams could foretell the future was widely accepted in antiquity. Some of the earliest written records from Mesopotamia include dreams, such as the magical vision reported by the High Priestess Enheduanna, in which she was raised up through a celestial gate as she praised the goddess of love. Several hundred years later, in the Assyrian Empire, dream omens were collected to associate events with their potential consequences. The infant Jesus wouldn’t have survived if Joseph had not obeyed dream commands from the Lord’s angels. The Nordic sagas are ridden with prophetic dreams. In the 19th century, the Lakota chiefs Red Cloud, Sitting Bull and Crazy Horse relied on dreams to resist the invasion of U.S. miners and soldiers. Nowadays, among the Yanomami people in the Amazon, shaman Davi Kopenawa uses dreams to lead his people against the attacks, fires and river poisoning promoted by invading miners.

Most if not all religions consider dreaming a gateway for divine revelation. What psychological journey must our ancestors have taken to justify such fantastical beliefs? Can we reconcile them with a materialist worldview? And if so, why would it matter? To answer these questions, we must understand the biological functions of sleep, reconstitute the evolution of dreaming, and survey the significance of dreaming from prehistory to history. In the end, this investigation suggests that dreams are more important now than ever.

Sleep plays many different roles in our bodies, such as the stimulation of protein synthesis, hormonal release, detoxification and memory processing. During sleep, memories are replayed through the reverberation of patterns of neuronal activity. Sleep has different stages. Slow-wave sleep processes memories of people, animals, objects, places and events. REM sleep processes emotional memories, such as coping with a frustrating incident, and procedural memories, like riding a bike.

Although some sort of dreaming goes on night and day, the intensity and complexity of the dream experience peaks during REM sleep. Creative insights, such as the sewing machine by Elias Howe, the periodic table by Dmitri Mendeleev and the song “Yesterday” by Paul McCartney, often emerge from dreams. REM sleep and dreaming increase memory restructuring, task solving and creativity. During lucid dreaming one becomes aware of dreams, and is capable of shaping them. Substances that induce dream-like states, such as cannabis and psychedelics, enhance cognition and creativity, and treat depression and trauma.

Read more: Why Do We Dream? A New Theory on How It Protects Our Brains

Neuroscience came to corroborate much of what Sigmund Freud and Carl Jung proposed over a century ago. For instance, the notion of ‘day residue’ agrees with the electrical and molecular evidence of memory reactivation during sleep. Likewise, the idea that dreams reflect desires has a solid neurological basis, since dreaming requires the activation of neurons that use dopamine to signal reward and punishment. REM sleep activates the default mode network (DMN), a group of brain regions involved in the representation of autobiographical narratives, mental traveling through past and future, and the minds of other beings. The DMN is key for attributing mental states to other people, which allows for empathy. During REM sleep, the DMN gives life to interactions between the ego and other ‘mind creatures’, simulating adaptations to potential future scenarios. Not surprisingly, dreams made reality are the essence of social change. In his “I Have a Dream” speech, the Reverend Martin Luther King, Jr., used the “D word” to place the need for racial justice at the center of the political debate.

But how and why did all this evolve? Birds, reptiles, and octopuses display a state like REM sleep, but only in mammals does it last long enough to generate the complex sequence of images we call dreams. This neurobiological oracle, not deterministic but rather probabilistic, warns about potential dangers and opportunities, providing guidance on decisions to be made. Mammals became able to guess, based on yesterday, what tomorrow could look like. Since nothing that is simulated in the dream world poses any real risk to the dreamer, the advantages of the ‘oracle of night’ are evident. Dreaming increased behavioral flexibility and probably boosted the mammalian radiation across the globe.

While most if not all mammals are capable of dreaming, only humans tell dreams to each other. For countless millennia of starry nights, dream sharing might have been quite exciting. The communal interpretation of dreams is a traditional source of group cohesion, creativity and advice in the face of a hostile world. An exquisite ethics of care began to evolve as early as the upper paleolithic. Under the blanket of sleep, our ancestors dreamed empathic and transformative innovations.

Soon enough, our ancestors no longer dared to do anything without consulting their dreams, depending on them to plan hunts, crops, buildings, wars and weddings. The historical record has abundant documentation of the highly regarded dream contact with dead relatives and gods. These encounters vigorously enriched our ancestors’ inner lives and led to the unprecedented cultural accumulation that catapulted our lineage into the future.

Nevertheless, at the dawn of capitalism and science, the interpretation of dreams moved out of public reach. In the past five centuries, starting in Europe and then spreading globally, it was no longer justifiable to resort to dreams when making state or trade decisions. Dream interpretation entirely lost its group relevance. Although rescued to the private domain by Freud and Jung, dreams never regained their social importance.

The realization of how tremendously adaptive sleep and dreaming are clashes with the sheer reduction of sleep time and dream recollection. With all the stimuli that invaded our lives, the opportunity to sleep and dream has become increasingly endangered. Sleep loss can lead to memory deficit, mood swings, depression, obesity, diabetes, cardiovascular diseases and risks of Alzheimer’s disease. Dream loss in turn can lead to a deep lack of insight into our desires, fears and challenges, as well as an inability to evaluate the consequences of our actions.

Read more: Why Dreaming May Be Important for Your Health

The gap between our potential to improve the world and our failure to do so has never been greater. Most people spend their entire waking life working very hard, but the ends don’t meet. The inner boss never sleeps, and most people feel guilty when trying to relax. Contemporary society is increasingly richer and more technologically advanced, yet most people are excluded from its benefits, more and more workers simply lose their jobs to intelligent machines, and the climate crisis looms. If we continue, the environment and our health will collapse. If we slow down, the economy will collapse. What is wrong with us?

Perhaps our difficulty imagining alternative futures is due to the abandonment of dreaming. We pay no attention to dreams whatsoever, neither at home, school or work. Upon waking in the morning, we simply cannot stay quiet in bed long enough to reconstruct the dreams we have just had. And even when we manage to remember our dreams, they often depict only individual desires and fears, rather than a collective vision of a better future. With our introspection dampened and our empathy stifled, we stubbornly continue to advance towards the most dangerous moment of the human adventure.

Heeding our dreams won’t be enough to solve the crises we face now, but it will help us to galvanize the gigantic financial and technological capital possessed by less than 3,000 billionaires and 9 million scientists. Nonetheless, neither capitalism nor science have the moral compass to guide our redemption. We need guidance from the wisest creatures of our minds and from dreamers like Pope Francis, Greta Thunberg, the Indigenous leader Raoni and the Dalai Lama, so that the strongest among us can relearn how to take care of the weakest. Only sheltered by the most genuine love, will we stand a chance.

A cultural update is urgently needed, by political leaders as well as regular citizens. It is time to relearn the art of dreaming from the native shamans who warn us about the imminent “falling sky” caused by our reckless predatory actions. In the words of Indigenous leader Ailton Krenak, “We are alerted all the time to the consequences of these recent choices that we have made. And if we can pay attention to any vision that escapes this blindness that we are experiencing all over the world, perhaps it can open our minds to some cooperation between peoples, not to save others, but to save ourselves.”

It is time to abandon the ancestral habit of competing rather than collaborating, of accumulating rather than sharing. Inequality, intolerance, climate change and the pandemic make the need for concerted action very clear. Safety can only come from a shared dream about a more inclusive future. If we want to stick around, it is vital to understand what dreams for the common good are, and to relearn the art of sharing them with our family, friends and planetary neighbors. 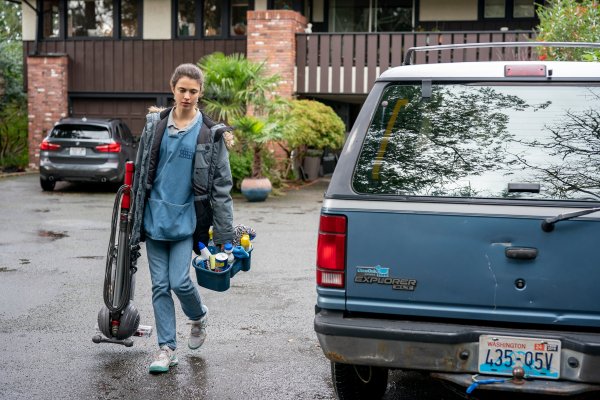 I Left Poverty After Writing 'Maid.' But Poverty Never Left Me
Next Up: Editor's Pick