As Teachers and School Boards Face a Spike in Violent Threats, the Justice Department Is Stepping In

Demonstrators opposed to masking and mandatory vaccination for students gather outside the Los Angeles Unified School District headquarters on Sept. 9, 2021, as board members voted that children 12 and older must be fully vaccinated against COVID-19 by January.
Jason Armond/Los Angeles Times—Getty Images
By Katie Reilly

The U.S. Justice Department is launching an effort to combat a spike in harassment and violent threats against school board members and teachers, calling it a “disturbing trend,” while Republican leaders are denouncing the move as an attempt to silence parents amid debates over mask mandates and social justice issues.

“While spirited debate about policy matters is protected under our Constitution, that protection does not extend to threats of violence or efforts to intimidate individuals based on their views,” Attorney General Merrick Garland said in a memo on Monday, directing the FBI and U.S. Attorneys’ Offices to meet with federal, state and local leaders to address the issue. The department also plans to create specialized trainings for school leaders on how to recognize and report threats.

The initiative comes as school board meetings across the country have become the sites of contentious protests over face mask requirements and amid claims that schools are teaching critical race theory. (The academic framework is not actually taught in K-12 schools, but conservative advocacy groups have rallied around the term to criticize lessons about systemic racism or anti-racism training for educators, arguing it divides children.)

In Worthington, Ohio, in September, school board member Nikki Hudson shared an angry letter she received over mask policies and diversity initiatives in the district. “You have become our enemies and you will be removed one way or the other,” the letter said.

A school board member in Beaver Dam, Wis., who voted to support a mask mandate in his district, resigned from his position in September, saying his family no longer feels safe. “I have to do what is best for my family and their well-being and resign my position on the school board effective immediately,” Tony Klatt said in a Facebook post announcing his resignation. “It isn’t in my family’s best interest for me to try to appease a vocal group that continue to try to intimidate, harass, insult, and throw civility to the side.”

In Sutter Creek, Calif., a father allegedly assaulted an elementary-school teacher in August during “a serious physical altercation” over a mask requirement, the school superintendent said in a letter to families about the incident.

The spate of disruptions led the National School Boards Association to ask President Joe Biden for federal law enforcement assistance “to deal with the growing number of threats of violence and acts of intimidation occurring across the nation.” The association cited instances of “angry mobs” interrupting school board meetings, leading to some arrests.

“Threats against public servants are not only illegal, they run counter to our nation’s core values,” Garland said in the DOJ memo. “Those who dedicate their time and energy to ensuring that our children receive a proper education in a safe environment deserve to be able to do their work without fear for their safety.”

But the memo sparked backlash from Republican lawmakers and conservative parent groups. Florida Gov. Ron DeSantis accused Garland of “using the FBI to pursue concerned parents and silence them through intimidation” and said the state “will not allow federal agents to squelch dissent.”

Read more: School Mask Mandates Are Going to Court. Here’s Why the Issue is So Complicated

Missouri Sen. Josh Hawley questioned Deputy Attorney General Lisa Monaco about the memo during a Senate Judiciary Committee hearing on Tuesday, calling it “a deliberate attempt to chill parents from showing up at school board meetings.”

Monaco defended the initiative and said it was intended to address criminal conduct and threats of violence, not to hinder public debate.

“Spirited debate is welcome, is a hallmark of this country. It’s something we should all engage in,” she said. “When and if a situation turns to violence, it’s the job of the Justice Department and local law enforcement to address that.” 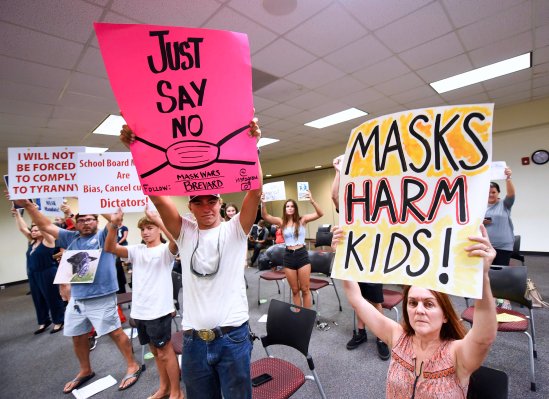 School Mask Mandates Are Going to Court
Next Up: Editor's Pick