The Biden Administration Promised 'Immediate' Aid to Haitian Deportees. It Has Yet to Arrive

Haitian migrants expelled from the U.S. arrive on September 19, 2021 at the airport in Port au Prince.
(Photo by Richard Pierrin / AFP)
By Jasmine Aguilera

As the United States moves quickly to deport thousands of Haitians, the Biden Administration has repeatedly promised to support the migrants upon their return to their impoverished home country. But more than a week after mass deportations began, U.S. assistance has yet to arrive, NGOs in Haiti say.

White House Press Secretary Jen Psaki told reporters on Sept. 23 that the Administration would work with the International Organization on Migration (IOM), a United Nations agency handling incoming flights of Haitian returnees from the U.S., to “ensure that returning Haitian migrants are met at the airport and provided immediate assistance.” The next day, Department of Homeland Security (DHS) Secretary Alejandro Mayorkas announced that the U.S. Agency for International Development (USAID) would provide $5.5 million for on-the-ground aid to repatriated Haitian migrants through IOM.

But on Monday, an IOM spokesperson told TIME that documents allocating USAID’s $5.5 million to IOM had yet to be signed. He said he expects them to be signed this week or next.

USAID did not immediately return TIME’s request for comment on the reason for the delay in funds to the IOM. The White House and DHS deferred questions to USAID.

Meanwhile, deportation flights from the U.S. continue to arrive daily, either at the nation’s capitol Port-au-Prince or Cap-Haitien in the northern part of the country. IOM Haiti is assisting almost 1,000 returnees per day, according to IOM.

In a nation recently wracked by both a devastating earthquake and political upheaval, many so-called returnees have no home to return to. “The Haitian Government has no or minimal resources to face this massive influx,” the IOM spokesperson adds. Between Sept. 19 and Oct. 1, the U.S. deported more than 6,000 Haitians, according to IOM estimates. By comparison, between Feb. 15 and mid-September, IOM assisted roughly 2,000 Haitian returnees.

After de-boarding the plane, returnees are met by police, who take down their identifying information, according to Margarett Lubin, the country director in Haiti for CORE, an NGO founded in 2010 that has been assisting with earthquake relief efforts. Crowds of new arrivals are then processed by Haiti’s national migration office. Under tents provided by IOM, they fill out paperwork and attempt to figure out how to restart their lives in Haiti. Other NGOs provide food and water or clothes if needed.

Read more: How History Is Repeating Itself for Haitian Migrants Trying to Enter the U.S.

“It’s pretty problematic, this process,” Lubin says. “I have personally worked with returnees in the past. I have never seen anything like this.” She describes one day that a plane arrived and everybody’s belongings were laid out in a pile on the floor. The newly arrived Haitians had to dig through it to find what was theirs, and in the processes many lost passports and other precious items, she said. Many returnees have told her that they plan to leave Haiti again as soon as they can.

IOM will provide about $100 to pay for migrants to travel to their Haitian home, if it is still standing, according to Lubin. Many of the migrants deported by the U.S. in the last two weeks have not lived in Haiti for years. Many originally migrated to Brazil and Chile, among other countries, before attempting this year to cross the border into the U.S.

Mayorkas announced the $5.5 million from USAID the same day that he confirmed that Border Patrol had cleared a migrant camp populated mostly with Haitian nationals that had formed under an international bridge in Del Rio, Texas. Most of the thousands of people living there have already been expelled or deported to Haiti, according to The Washington Post.

Democrats have criticized the Biden Administration’s embrace of a Trump-era health measure called Title 42, which allows the government to “expel” anyone who attempts to cross the U.S. border—even if they are hoping to claim asylum. State Department official Harold Koh, who recently left the Administration to take a previously-planned professorship at Oxford University, issued an internal memo, dated Oct. 2 and obtained by POLITICO, criticizing the Administration’s use of Title 42, particularly against Haitians.

“Simply put, Haiti is a humanitarian nightmare,” Koh writes. “But if Haiti is undeniably a humanitarian disaster area, the question should be: at this moment, why is this Administration returning Haitians at all?”

The $5.5 million in aid is intended to be used to provide “first aid and medical assistance, accommodation support, protection for the most vulnerable returnees, psychosocial assistance and counseling services, food and beverage, and hygiene kits, short-term grants to support reintegration, among other immediate support efforts,” according to USAID.

But even when that much-anticipated money arrives, it may not be enough. “Having to reintegrate about 14,000 people…it’s not a lot of money,” Lubin says. Many returnees will need housing, psychosocial support and a way to earn a living. “[$5.5] million, I don’t know how much that can do.” 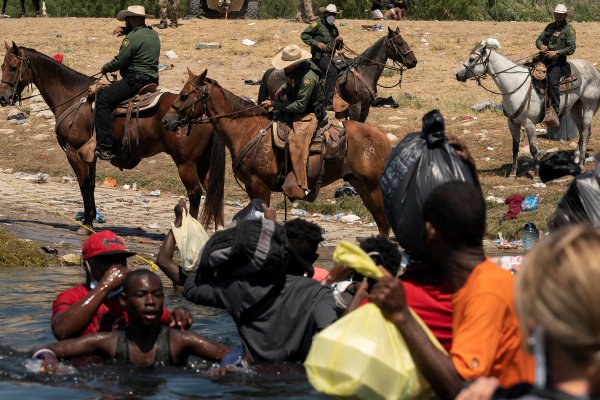