Surprising Data Shows Political Letter-Writing Still Gets Out the Vote

I’ll be the first to admit it: I rolled my eyes when (mostly progressive) political activists last year announced a massive effort to replace traditional get-out-the-vote canvassing and phone banking with hand-written letters. It just seemed a bit twee to me in an era of sophisticated data modeling, social-media targeting and brute-force tweets from an incumbent President. But the pandemic took traditional get-out-the-vote efforts off the table for most Democrats, and they had to try something.

Put another way, all of those letters moved the needle by almost a full percentage point nationwide—a far greater swing than even the most optimistic organizers had planned, they tell me. In fact, they initially had thought the over-under to be about 0.2 percentage points when they registered their experiment with the Center for Open Science. Instead, the study quantifiably found the letters boosted targeted voters’ turnout by 0.8 percentage points.

So I will now make another admission: my cynicism was ill-placed and this low-tech approach actually worked.

One veteran strategist likes to say everything a campaign does with get-out-the-vote is worth, at best, a field goal: three points. Everything else is baked-in by views of the candidates, paid and earned media and the political environment. So to be able to change almost 1 percentage point with just stamps and mailing lists? Well, that deserves to be given a second look—by both parties.

Now, before you dismiss the numbers, it isn’t the activists themselves making these claims, although they are promoting the results. The whole experiment, from the beginning, had outside eyes on it for a peer review from political scientists and data nerds who took almost a year to nail down the findings. And while the arbiter is a partisan arm of Democratic politics, no one credibly questions the professionalism of the quants who quietly work behind-the-scenes to do a first pass on the numbers at the Analyst Institute, the Democratic Party’s unofficial data ninjas.

“What really excites us about this is not just to show that it works, but it works so well that we can really feel so confident going out there with this number,” says Emily Wasserman, the data and research director Vote Forward, the group that coordinated more than 50 partner organizations to boost turnout last year through a letter-writing campaign.

Vote Forward, one of the bevy of organizations that rose from the 2016 elections, organized itself as an apolitical non-profit organization with an objective of turning out voters, regardless of party. One of its arms, which must disclose its donors, focused on Black, Hispanic, AAPI and Native American voters. The other, whose donors remain private, focused on reaching very likely Democratic donors. But in neither case were the messages explicitly political. In fact, Vote Forward co-founder Scott Forman tells me that earnestness probably helped reach voters who might otherwise have been turned off by the campaign.

“A lot of political communication can be kind of sharp elbows. We’re the opposite. It’s so wholesome. The letters even say, ‘I am not asking you to vote for any particular candidate. I’m just asking you to exercise this fundamental right,’” he says.

It also helped bring in a ton of first-time activists. The low-cost, do-what-you-can approach runs counter to some campaigns’ hyper-involved ethos with daily check-ins from volunteer coordinators and unrelenting pressure for volunteers to do more, with a pace approaching rushing a fraternity. Instead, Vote Forward demanded a chill vibe. Plus, the clock was on their side; the letters could be written over months, tucked into a closet and deployed at a strategic moment in a way door-knocking the weekend before an election simply cannot.

In fact, more than 200,000 volunteers wrote letters last year, coming in through groups like the resistance-minded Indivisible and Swing Left alongside mainstays People for the American Way and J Street.

Democrats say this has to be a major part of their strategy going forward, especially in next month’s state races in Virginia and 2022’s midterms, which will be a far different universe than 2020—one where such letters could have an even greater impact without the competition of national candidates or COVID-19.

“Vote Forward’s innovative letter-writing program was brought to scale for the first time during the pandemic, but these results have the potential to transform future GOTV efforts for years to come, as campaigns, organizations and volunteers are increasingly likely to adopt a ‘hybrid’ approach to mobilizing voters,” said David Berrios from Swing Left, a group that connects voters in non-competitive places like Utah to send letters to in-play places like Virginia. (In fact, Swing Left volunteers have already written thousands of letters to Virginia voters ahead of that state’s elections next month.)

Organizers say the return-on-investment is the best in the game, although that’s a tough superlative to define with certainly. Still, the numbers are impressive: a standard $1,000 outlay from Vote Forward brought in 74 votes, or about $14 per vote. Compare that South Carolina’s Senate race last year, when Jaime Harrison, the Democratic nominee, spent $95 per vote and still lost.

And these strategists are only getting more sophisticated. For instance, Vote Forward is partnering with Voto Latino right now to work on city elections in Miami and Atlanta to have volunteers write messages in both English and Spanish, side-by-side.

“We’re going to do it again and we’re going to make it bigger,” Forman tells me, looking into 2022. “There are many, many states in many congressional elections that are going to be super close.”

Finally, a note to this newsletter’s friends who are donors (and my apologies to our friends who work in fundraising): if you’re giving money to an organization, ask to be briefed on their similar studies. The days of running massive campaigns on a hunch are over. Political science isn’t a field for West Wing aficionados. It’s a hard science and this type of research is common at credible groups and consultancies—and firms that aren’t making good-faith efforts to check their own assumptions are often wasting a whole lot of your money.

The original version of this story misstated the nature of Swing Left’s mail program. Volunteers wrote letters but not postcards. 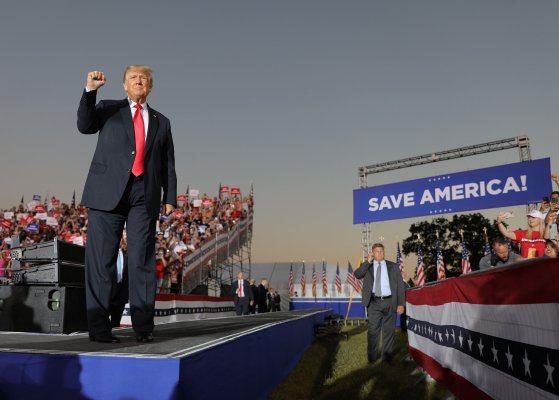 Donald Trump Still Leads The Republicans—And That’s Bad for Almost Everybody
Next Up: Editor's Pick