Early voting is taking place at a variety of satellite locations around Detroit on Oct. 5, 2020.
Mandi Wright—USA Today/Sipa
By Philip Elliott

Tory Trowbridge has a little trick that she uses to keep things loose as she tries to get people to vote on Nov. 3. As the 29-year-old actor writes to swing-state voters, she switches up her target state every 20 addresses so she doesn’t fall into a rut. The switch, which comes about once an hour, gives her a quick break to read-up on a new place where she’ll send her next batch. So far, she has completed more than 370 hand-written appeals for total strangers to vote.

“In a world where I thought I’d be canvassing this election, it’s hard to find something to give when we can’t take to the street,” she tells me by phone from Chicago. “I am able to channel my exceeding anxiety into a prolific blue pen and write letters to under-represented voters. And, hopefully, having a heart-felt, simple message that reaches their doorstep can empower them to make the decision to vote in an election where they might feel overwhelmed.”

Trowbridge is part of a decidedly old-school campaign designed to boost turnout on Election Day. While tens of millions of dollars are being spent on digital ads and polished television spots, one group of grassroots activists has been busy with pens, stationery and packets of 55-cent stamps. By Thursday, they had banked 12 million individual letters that will start arriving in voters’ mailboxes just before Election Day. The original goal, announced back in April, was 10 million. Last week, that target went up by 5 million more. (A separate effort, the Postcards to Swing States project, hit its own goal of 15.7 million pieces of mail as well.)

Welcome to The Big Send, a joint effort powered by groups like Swing Left, Indivisible and People for the American Way. While the effort is officially non-partisan, you won’t find many red Make America Great Again hats at their virtual letter-writing parties organized by Vote Forward, the non-profit coordinating the flood of mail.

Yes — they have letter-writing parties via Zoom. Some groups in Texas like to bring in local political candidates and musicians for a scaled-down show to keep volunteers’ pens moving along every week. “It’s been some nice background music for while people write,” says Meghan Ross, a 31-year-old volunteer in Austin. “We found a nice rhythm these past couple of months.”

Nationally, the effort has drawn its own series of civic activism-meets-entertainment evenings. The cast of Hamilton, including Lin Manuel Miranda, hosted a session for letter-writers; it drew 50,000 RSVPs. A Gilmore Girls reunion coincided with another evening of action. Corporate allies like PayPal and Patagonia are backing the effort that, on any given day right now, sees roughly 250,000 new letters stacking up.

This snail-mail effort is giving frustrated voters who want to do more a way to let off steam while they can’t go door to door during the pandemic. “A lot of our traditional options that were in person — canvassing and even getting together for phone-banking and other lit-drop type of events — those were all taken away. And so letter writing was really exciting and a bit of a lifeline to continue our get-out-the-vote efforts in very challenging circumstances,” says Luke Goetting, a 32-year-old volunteer in Austin.

This is the new reality where the traditional tactics of gathering at campaign offices to phone-bank or head out in pairs to knock on doors can’t happen. In the absence of organizing that creates communities of like-minded neighbors every election cycle, this is standing in as a substitute. Gone are the sheets of pizza ordered to keep volunteers from wandering out for food. Arrived are lists of low-propensity voters who might need a little nudge to show up on Nov. 3.

For most of this year, Biden’s campaign has been strict about shutting down large gatherings and door-knocking. It is, after all, tough to blast President Donald Trump for not heeding calls to keep distant and limit travel while dispatching volunteers. But this weekend, as Election Day nears, Biden’s team is going to try to get into the field and test their version of a machine Republicans have fine-tuned over the summer. But with next week’s debate shut down because Trump, who tested positive for COVID-19 last week, didn’t like the remote format, and Biden increasingly ahead in the polls, this weekend might be more of a toe-dip into get-out-the-vote waters than a cannonball.

Many skeptics who initially scoffed at the letter-writing approach have come to see its wisdom. The letters can be assembled for months, building up an arsenal of persuasion that doesn’t necessarily feel political. Organizers emphasize volunteers should write personally and maybe not follow a set script if they can help it.

The resulting stockpile of letters can then be sent en masse in the coming weeks in a show of force no get-out-the-vote door-knocks could match in such a short time. “We’ve actually been working on this for the better part of the year. Our volunteers have been writing letters and holding onto them with an eye to sending them in October,” says Scott Forman, the executive director of Vote Forward, the group coordinating the volunteers. “You can’t hold onto phone-banking or door-knocking.” 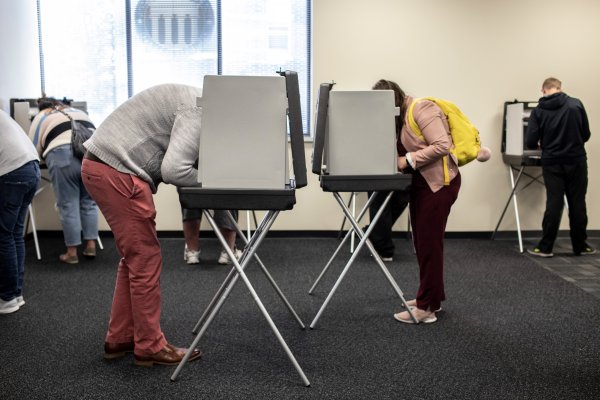 Election Day May Not Yield a Quick Answer
Next Up: Editor's Pick