Fumio Kishida Is Japan's New Prime Minister. Here's How He Beat a Much More Popular Rival

Fumio Kishida, former foreign minister of Japan and the newly-elected leader of the ruling Liberal Democratic Party, at his office in Tokyo, Japan, on Sept. 3, 2021.
Shoko Takayasu—Bloomberg/Getty Images
By Chad de Guzman

Fumio Kishida has been elected Japan’s new prime minister by the country’s lawmakers—just days after the ruling Liberal Democratic Party (LDP) picked him as leader.

The 64-year-old succeeds Yoshihide Suga, who bowed out in September amid anger over his government’s COVID-19 response and his insistence to push through with the 2020 Tokyo Olympics.

On Sept. 29, Kishida beat the head of Japan’s COVID-19 vaccination program, Taro Kono, in a poll of LDP lawmakers and rank-and-file party members. His election as prime minister was all-but assured, because the LDP and its allies control the country’s legislature, the National Diet.

But now he faces the challenge of reviving the world’s third-largest economy, battered by the pandemic—and securing another four years in power for the LDP after general elections this fall.

Kishida, a longtime party stalwart, won the LDP leadership after a deal among party power-brokers—despite what many political observers say is his lack of personal appeal and much broader public support for Kono.

Jeffrey Kingston, the director of Asian Studies at Temple University in Japan, previously told TIME that he finds Kishida to have “zero charisma” and believes he lacks “pizzazz” in his communication with the public.

Kishida was supported by one of the LDP’s largest factions, but only led Kono by one vote in the first round of party voting. Yoshikazu Kato, a director of a Tokyo-based research and consulting firm Trans-Pacific Group (TPG), believes Kishida’s team was able to secure more votes with help from supporters of ultraconservative candidate Sanae Takaichi—who was vying to become Japan’s first female prime minister.

Takaichi came in third and was eliminated from the race in the first round, along with moderate party executive Seiko Noda who fell to fourth. “Kishida and Takaichi, both of them, and both of their teams, have already decided if things have gone to the second round what they are going to do,” Kato tells TIME. “This is the secret to why Kishida accomplished such a big win.”

Ultimately, Kishida may have been more palatable to the LDP’s conservative elders, than Kono—who is more liberal and supports legalizing same-sex marriage and phasing out nuclear power, observers say.

Kato adds that Kishida was the first candidate to express interest in the premiership. “From the beginning until today, Kishida has been very consistent and confident, and very much ready for what happens next,” he says.

Observers say Japan’s new leader will have to address long-standing issues such as the aging population and threats brought on by China’s increasing assertiveness in the region, on top of helping the country recover from the COVID-19 pandemic.

Tokyo’s diplomatic ties with Beijing have also been strained. Japanese leaders have spoken out in support of Taiwan, and criticized increased Chinese incursions into territory around islands in the East China Sea that are claimed by both Japan and China.

Kishida, a nine-term member of the House of Representatives, was in charge of foreign affairs for more than four years under Prime Minister Shinzo Abe, Japan’s longest-serving foreign minister. He had met with his Chinese counterpart Wang Yi several times—which Kato believes may bode better ties between the two countries.

Although he has advocated continuing dialogue with China, Japan’s top trading partner, Kishida has promised to take a harder line militarily and supports boosting Tokyo’s defense budget amid the threat posed by Beijing. However, Kato says, “Kishida is not pro-China or anti-China, but he is a person who can talk.”

On Japan’s economy, Kishida says the country needs a “new capitalism” to help narrow a wealth gap that has grown with the COVID-19 pandemic. He has called for a major stimulus package, as well as setting aside $90 billion to fund scientific developments and renewable energy. He has also advocated moving away from the deregulation of business that began in the early 2000s.

While the economy grew faster than expected after Suga announced he would not continue his term, its continued recovery may be slowed by the surge of coronavirus infections in July and August.

Regarded by political peers as a moderate, Kishida will have to win back the public’s support and improve the approval ratings of the government to do this. However, Kishida’s personality could make it harder for him to get his message across to the Japanese public, says Kato—especially compared with the more forthright Kono.

Kingston, of Temple University, says attending to Japan’s wealth inequality will help improve the LDP’s image, which will boost its chances of maintaining power when the general election comes in November.

Kishida has to “hit the ground running,” Kingston says. “He has to deliver. He has promised these things.” 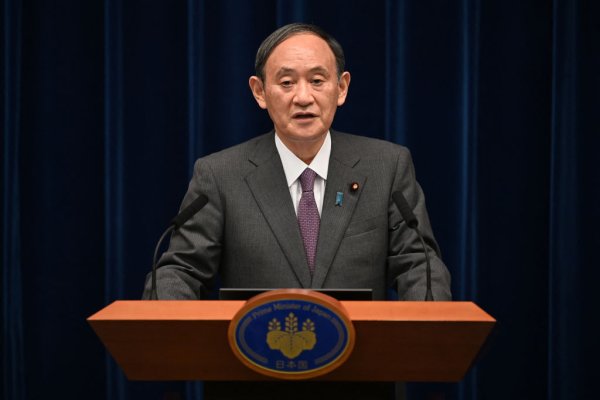 Japan's PM Suga Steps Aside
Next Up: Editor's Pick