Yoshihide Suga is bowing out as prime minister of Japan, amid increasing anger over his government’s handling of COVID-19 in the wake of the Tokyo Olympics. He announced Friday that he will not seek re-election as leader of the Liberal Democrat Party (LDP) at the end of September.

Suga, 72, became prime minister just one year ago after long-serving Prime Minister Shinzo Abe stepped down over health concerns. He said during a party meeting Friday on that he wanted to focus on the coronavirus pandemic instead of continuing on as the head of the LDP.

With a general election upcoming in the fall, Suga’s resignation paves the way for a new leader of the world’s third-largest economy.

Here’s what to know about Suga’s resignation and what it means for Japan.

Why is Suga stepping aside after just a year in office?

Suga’s popularity has plummeted over his handling of the coronavirus pandemic; Japan is currently battling its largest wave of the virus since the pandemic began.

“Suga’s insincere and ambiguous comments and actions on containing the pandemic every single day have made Japanese citizens very frustrated,” says Yoshikazu Kato, a research fellow at the Rakuten Securities Economic Research Institute in Tokyo. “The public nowadays basically does not trust the government at all.”

Suga hoped the Olympics would help boost his popularity, but despite a record medal count for Japan, his ratings sank even lower. The number of COVID-19 cases has surged to all-time highs in recent weeks in Japan, due to the more contagious Delta variant. The Japanese public, angry over Suga’s decision to hold the international event in the midst of a pandemic, has increasingly ignored government pleas to stay at home. Support for the Prime Minister was below 30% in both July and August, according to polls by local media.

“Suga has long been under pressure due to criticism of his coronavirus response and a host of other issues,” says Kristi Govella, the Deputy Director of the Asia Program at the German Marshall Fund of the United States. “But the ground really shifted over the last couple of weeks and his support from within the party eroded quickly.”

Experts say that LDP members began to worry that having Suga as party leader could cost them seats in the general election, which must be held before the end of November. “My guess is that he was persuaded” to step aside, says Jeff Kingston, the Director of Asian Studies at Temple University Japan.

Who will be Japan’s next prime minister?

Japan has a parliamentary system, and the LDP and its allies have a strong majority in the lower house of the legislature, the National Diet—which means whomever wins the LDP leadership race will become the next prime minister.

However, the new leader will have only a few weeks before he or she will have to face Japanese voters in a general election. Despite Suga’s deep unpopularity, the LDP still dominates politics in Japan, so whomever is picked in the party leadership election is likely to win a four-year term in office.

Several contenders have already indicated they were interested in running for LDP leadership. With Suga gone, even more candidates may emerge, and it’s unclear who is likely to come out on top, observers say.

Former Foreign Minister Fumio Kishida—who had already said that he would challenge Suga for the party’s presidency—is currently the frontrunner, but that could change quickly as others enter the race, Govella says.

Kingston says that although Kishida really wants the job and has made some big promises, like a huge coronavirus stimulus package, he has “zero charisma.” “He’s just an unimpressive guy,” says Kingston.

A recent poll by Nikkei Asia found that Taro Kono, a former foreign minister and the country’s vaccine czar, and Shigeru Ishiba, former secretary-general of the ruling party, were ranked as top choices for the LDP’s next presidency.

But Kingston says Kono’s is involvement with the vaccination drive—which many in Japan perceived as too slow to start—may hurt his chances, and it’s not clear if Ishiba wants the job.

Japan’s Internal Affairs and Communications Minister Sanae Takaichi has expressed interest in running for the LDP’s top spot, and former defense minister Tomomi Inada has indicated her interest in the past. Kato, of the Rakuten Securities Economic Research Institute, says that although some experts believe Takaichi might be Japan’s first female Prime Minister, she’s unlikely to win this round.

Observers have also named Shinjiro Koizumi, the country’s charismatic environment minister and son of former Prime Minister Junichiro Koizumi as a possible contender, but Kingston says the 40-year-old politician is “just too young.”

“Suga’s resignation opens up the race. A lot of people who were hanging back… now, these people are probably going to be reconsidering,” says Kingston.

What does this mean for Japan?

Suga served as his predecessor’s cabinet secretary for eight years before he became prime minister. His decision to step aside marks the end of an era for Japan. “Suga’s resignation actually means the end of the longest administration in Japanese constitutional history—Abe’s administration,” Kato says.

Despite uncertainty over who will take over the LDP from Suga, experts say that the change in leadership might not be all that significant.

“I think there are signs that the LDP is going to retain its majority, but they figure they’ll do better under a fresh face, rather than Suga who’s been looking pretty weary lately,” says Kingston.

Says Govella: “Despite Suga’s departure, we are likely to see a great deal of continuity in Japanese politics given the dominance of the LDP and the need for the next prime minister to focus on Japan’s coronavirus response.” 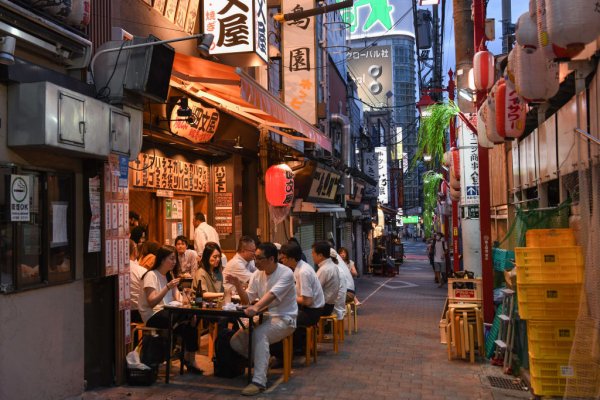 The Olympics Broke Japan's COVID-19 Defenses
Next Up: Editor's Pick