Rome Didn't Fall When You Think It Did. Here's Why That Fabricated History Still Matters Today

Odoacer forces Romulus Augustus to resign in 476 AD.
Universal History Archive/Universal Images Group/Getty Images
Ideas
By Edward J. Watts
Edward J. Watts is the author of The Eternal Decline and Fall of Rome: The History of a Dangerous Idea and Mortal Republic: How Rome Fell Into Tyranny. He holds the Alkiviadis Vassiliadis Endowed Chair and is professor of history at the University of California, San Diego. The author and editor of several prize-winning books, including The Final Pagan Generation, he lives in Carlsbad, California.

In September of 476 AD, the barbarian commander Odoacer forced the teenaged Western Roman emperor Romulus Augustus to resign his office. The Constantinopolitan chronicler Marcellinus Comes would write in the 510s that when “Odoacer, king of the Goths, took control of Rome” the “Western Empire of the Roman people … perished.” But no one thought this at the time. The fall of Rome in 476 is a historical turning point that was invented nearly 50 years later as a pretext for a devastating war. The fact that it has since become recognized as the end of an epoch shows how history can be misused to justify otherwise unpalatable actions in the present—and how that misuse can also distort the lessons future generations take from the past.

Although everyone from schoolchildren to scholars now learn that the Western Roman Empire fell in 476, 5th century Romans did not see anything particularly special about Odoacer’s coup. Nine different Western Roman emperors had risen and fallen since 455 and most of them had been overthrown by barbarian commanders like Odoacer. In four cases, the barbarian generals toppled one emperor and delayed appointing another. One of these imperial vacancies stretched for 20 months, a span longer than the entire reigns of more than 20 previous Roman emperors. Even Romulus Augustus himself was a usurper who assumed the imperial office after an imperfectly executed coup that left Julius Nepos, the legitimate emperor Romulus replaced, still in charge of Western Roman imperial territories in what is now Croatia. In other words, while the West had lost an imperial usurper in 476, it still had a legitimate Roman emperor.

Odoacer maintained most of the structures of the Roman government during the nearly 17 years he controlled the state. The Senate continued to meet in Rome just as it had for nearly a millennium. Latin remained the language of administration. Roman law governed the land. Roman armies continued to fight and win victories on the frontiers. And Roman emperors appeared on the coins that Odoacer minted. These coins showed Julius Nepos at first and then, after Nepos’s death in 480, they featured the busts of the Eastern Roman emperors who reigned in Constantinople.

These aspects of Roman life continued after the Gothic ruler Theoderic overthrew Odoacer in 493. Theoderic proved even more successful than Odoacer in reviving Italian fortunes after the political chaos of the mid-5th century. His armies campaigned successfully in modern Croatia, Serbia and France. He made much of Spain into a protectorate for a time. Large scale repairs were made to churches and public buildings throughout Italy. Either Theoderic or Odoacer undertook renovations to the Colosseum following which senators proudly inscribed their names and offices on their seats.

Rather than imagining that Roman rule had ended in 476, Italians in the late 5th and early 6th centuries spoke about its recovery. Bishop Ennodius of Pavia spoke of the “filth” that Theoderic “washed away from the greater part of Italy,” leaving Rome, as it emerged from “the ashes,” “living again.” Theoderic’s military victories meant that “the Roman empire has returned to its former boundary” and returned “the culture of our ancestors” to Romans who had lived in the regions he reconquered. Ennodius even went so far as to claim that “the revival of Roman renown brought Theoderic forward” as a rival to Alexander the Great because he had sparked a Roman “Golden Age.”

How did it happen that Odoacer’s coup, the beginning of this Roman resurgence, instead came to be seen as the fall of Rome? The answer lies not in Italy but in Constantinople. As Italian power returned under Odoacer and Theoderic, relations with the Eastern Roman Empire in Constantinople deteriorated. By the time of Theoderic’s death in 526, Romans in Constantinople had begun considering the possibility of invading Italy.

Read more: The Fall of Rome and the Lessons for America

It is at this moment of East-West tension that we can return to Marcellinus Comes. Marcellinus’s Chronicle appeared in the late 510s and represents the first historical work known to claim that Rome fell in 476. Marcellinus’s text also gives away why he said this. Marcellinus describes Odoacer as “the king of the Goths” when he caused the Roman Empire to “perish.” This is a fabrication. Odoacer was not a Goth. Theoderic, however, was a Gothic king and he had taken power from Odoacer. As the Gothic-led Western Roman state found itself in increasing tension with Constantinople, the fall of Rome emerged as a way to justify an Eastern Roman invasion that would restore Italy to Eastern Roman control.

Marcellinus did not invent this idea in a vacuum. He served in Constantinople as an aide to the future Eastern Roman emperor Justinian, who was at the time the imperial heir apparent. Marcellinus later received several honorific titles from Justinian following the publication of his Chronicle, a work that bluntly hammers home its main theme that the Western Empire had fallen and Justinian’s Eastern Roman Empire should restore it.

This propaganda worked well. In 535, Eastern Roman armies attacked Italy. Justinian explained this aggression by claiming that “the Goths have used force to take Italy, which was ours, and have refused to give it back.” His troops entered the city of Rome in December of 536. On this day, Justinian’s official historian Procopius wrote, “Rome became subject to the Romans again after a time of 60 years.” The number 60 was not arbitrarily chosen. The capture of Rome by the East came 60 years and three months after Odoacer’s coup of 476.

Despite these initial successes, Justinian’s armies struggled to consolidate control over the peninsula. The Italian war did not conclude until 562 and the fighting devastated both the city of Rome and much of Italy. Goths recaptured Rome in 546, lost it in 547, retook it in 549, and then lost the city for good in 552. Residents of Rome survived by eating weeds, mice and dung during a long Gothic siege in 546. It is estimated that Rome’s population fell from perhaps 500,000 in the mid-5th century to as little as 25,000 in the 560s. Other Italian cities suffered even worse fates. Milan, once Italy’s second largest city, was razed to the ground in 539 with its entire population either killed or enslaved. The Eastern Roman Empire had recovered Italy—and destroyed much of it in the process.

The Western Roman Empire had clearly fallen by the 560s. Italy was controlled by Justinian, many of its cities were ruined and much of its infrastructure was severely damaged. When later historians looked for the moment when the Western Empire fell, they found Marcellinus and his claim that Rome fell under Odoacer. In the memorable framing by the historian Brian Croke, the fall of Rome in 476 is a manufactured historical turning point that has become an accepted historical fact. But it was Justinian’s invasion, not Odoacer’s coup that decimated Italy and ended the Western Roman state. For 1,500 years, we have picked the wrong time and blamed the wrong person for the fall of Rome.

This mistake matters for two reasons. First, Marcellinus’s manufactured fall of Rome helped create conditions that permitted Justinian to launch a war that killed hundreds of thousands and destroyed the prosperity that Roman rule had once created in the West. His words had real, deadly and long-lasting consequences.

Second, the manufactured fall of Rome reveals the unstable boundaries between historical epochs. For 1,500 years, Odoacer’s coup has concluded a cautionary tale about how barbarian commanders in the Roman army ended Rome’s empire. People around the world have scrutinized this story so that their societies may avoid suffering Rome’s fate. But, if we recognize that Rome did not fall in 476, the lessons we take from Roman history become quite different. Rome’s story then does not warn us of the danger of barbarous outsiders toppling a society from within. It instead shows how a false claim that a nation has perished can help cause the very problems its author invented. We ignore this danger at our peril. 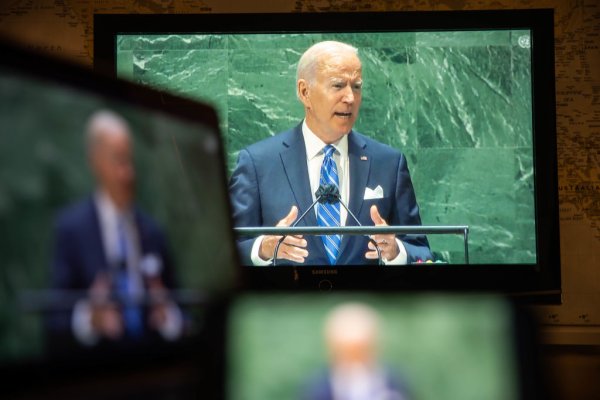 How Biden's UN General Assembly Speech Lines Up with Reality
Next Up: Editor's Pick