The Fall of Rome and the Lessons for America

Vincenzo Camuccini, The Death of Caesar, 1798
Getty Images
Ideas
By Edward J. Watts
Edward J. Watts is the author of The Eternal Decline and Fall of Rome: The History of a Dangerous Idea and Mortal Republic: How Rome Fell Into Tyranny. He holds the Alkiviadis Vassiliadis Endowed Chair and is professor of history at the University of California, San Diego. The author and editor of several prize-winning books, including The Final Pagan Generation, he lives in Carlsbad, California.

The Roman Republic inspired many of the delegates who traveled to Philadelphia to design an effective federal government for the new United States in the summer of 1787. There was good reason for this. Not only did Rome’s Republic endure for nearly 500 years, but it also offered consensus-building tools like the separation of powers, a system of checks and balances, and veto power. The Roman Republic also provided an important caution. While it had been extraordinarily successful, the Founders also knew that Rome degenerated into autocracy in the first century BC. Fearing such an outcome, Benjamin Franklin once told a concerned citizen that America would be “a Republic, if you can keep it.”

The concern that the young Republic would quickly die proved unfounded. Despite a civil war and profound regional differences, our Republic has endured for more than 200 years. But now, as the US faces a deepening political crisis, we are again looking to history to try to imagine our future. For the past two years many have turned to Germany’s Weimar Republic and other failed European states of the 1930s to understand our current political crisis. But the Roman Republic is the more relevant model. Not only is the American republic the daughter of Rome’s, but, like first century Rome, it is now an old country whose citizens know no other form of government.

Old republics like Rome differ from young ones like Weimar Germany because their citizens have learned to value the freedom, political norms, and constitutional checks that defend against a rapid descent into autocracy. Ancient Romans celebrated Brutus the elder (the man who overthrew Rome’s last king in 509 BC) and Servilius Ahala (a fifth century politician who assassinated an aspiring Roman king) in much the same way that Americans revere George Washington and Abraham Lincoln. Romans were taught to expect annual elections, respect the choices voters made, and accept that elected officials would represent the interests of all Romans. Perhaps most importantly, they believed politics to be a peaceful process that required representatives to compromise with each and build broad consensuses around difficult policies. This culture kept Rome stable even as it grew into what would eventually become the world’s largest state.

The most significant danger old republics like ours face is not the sudden assault of an aspiring autocrat but the slow erosion of their cultural and institutional defenses. In Rome, this degeneration began gradually and almost imperceptibly in the middle of the second century BC. As in the US now, mid-second century Rome confronted the emergence of a huge gap between its wealthiest citizens and everyone else. During these years much of the wealth plundered from Rome’s newly conquered provinces concentrated around an emerging class of super rich families while the living standards of middle-class Romans stagnated. For more than a generation, Roman politicians tried to address the resentments that this growing inequality had created by proposing voting reforms and crafting schemes to distribute public resources to poor Romans. But most of their proposals were blocked. Then, in 133 BC, the populist politician Tiberius Gracchus proposed a modest redistribution of Italian land in an attempt to support some of Rome’s poor. As with similar laws proposed in the late 140s, Tiberius failed to build the necessary consensus to pass his proposal. Undeterred, Tiberius mobilized crowds of threatening supporters and successfully removed a magistrate from office who had threatened to veto the law—the first time in Roman history such a thing had happened. Tiberius then paid for the reform with funds traditionally controlled by his opponents in the senate. This broke another long-standing Roman political norm. While Tiberius’s supporters applauded these breaches of tradition, his opponents responded violently and murdered Tiberius before he could win re-election. This was the first act of political violence in Rome in more than 300 years.

Calm soon returned to Rome, but the lessons of 133 BC could not be unlearned. Norm breaking, violence, and even assassination had proven useful political tactics. Ambitious Romans began to adopt them with greater regularity and more sophistication. Despite the growing political dysfunction that pushed Rome into a civil war in the 80s BC and another that lasted from 49-46 BC, Romans still believed that their Republic survived. Some Romans, like Brutus the younger, imagined the Republic could be restored even after Julius Caesar had himself named perpetual dictator in 44 BC. But Brutus’s assassination of Caesar only provoked a third, much more horrifying series of civil wars in the 40s and 30s BC. These battles finally revealed to Romans what objective observers could already see. Romans had allowed their Republic to die.

The ancient Roman story offers a chilling lesson to modern Americans. The robust defenses that protect older republics slowly erode if they are not regularly reinforced. This degeneration often starts with something like a spike in wealth inequality that, if unaddressed, eventually frustrates citizens. Even so, it may still take decades before citizens turn to men like Tiberius Gracchus or Donald Trump who promise that they will do whatever is necessary to address voters’ frustrations. An old Republic can endure this type of crisis for a generation or a century. It can even emerge from this danger if politicians build a consensus around specific ways to address the concerns of their voters. But no republic is eternal. It lasts only as long as its citizens want it. This is the moment when we must again heed Franklin’s warning: Our state is a Republic—if we can keep it. 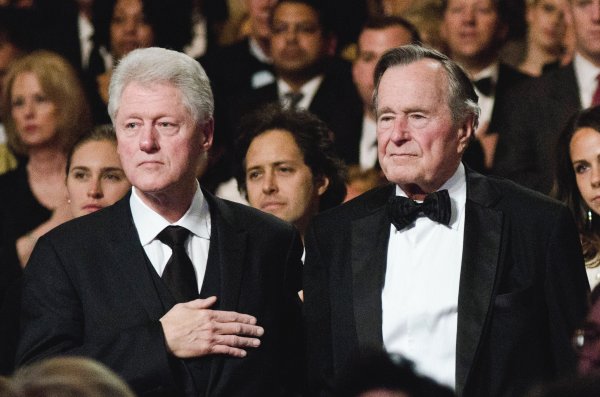 Inside the Surprising Friendship Between George H.W. Bush and Bill Clinton
Next Up: Editor's Pick