The iPhone 13 Is Perfectly Fine

Like clockwork, Apple has let loose this year’s version of last year’s smartphone, the iPhone 13. Looking at the line up, which also includes the iPhone 13 mini, 13 Pro, and the (quite large) 13 Pro Max, you’ll be properly satisfied by the updated hardware and improvements brought by the most recent software update iOS 15. However, if you’ve got an iPhone with a number in the double digits, there’s not much here you haven’t seen before.

That’s not necessarily a bad thing, just a disappointing one. The iPhone 13 is a great device that certainly improves upon the standard formula, with refinements like a noticeably improved display, upgraded cameras and more power under the hood. But it’s no longer the cool smartphone choice, more like the pragmatic one.

Since the iPhone 13 looks nearly identical to last year’s iPhone 12, there’s not much visually distinctive about them. Available in a variety of muted colors like blue, black, gold and red, the iPhone 13 and 13 mini maintain the same rectangular shape, flat edges and slightly bulging camera bump. The ever-present “notch” at the top of the display is still there, but 20% smaller according to Apple.

Read More: Why Apple’s Health App Could Be the Sleeper Hit of iOS 15

But oh, what a display. At 6.1-inches on the iPhone 13 or 5.4-inches on the mini, it zips by beneath your fingers thanks to the 120hz variable refresh rate, which Apple calls “ProMotion.” When your screen is still, frame rate will drop to save power, and speed up to ideally present whatever content you’re looking at.

The silky smooth motion from the refresh rate is the first thing you’ll notice when you use an iPhone 13, and hard to live without once it’s in your hands. Is it a feature that’s been available for a long time on high-end android phones? Yes, like many of Apple’s notable new features. But it doesn’t make it any less sweet.

The iPhone 13 has a smart MagSafe connector on its back, which now supports new accessories like the card wallet (a hassle to use in a pinch, frankly) and improved wireless charging efficiency.

But we know why you want a new iPhone, and it’s because of the cameras. So the real question for you is do you want two cameras or three?

The iPhone 13 and 13 mini feature two cameras, a regular wide angle and an ultrawide angle. While the 13 Pro and 13 Pro Max have three, including an extra 3x telephoto lens (and an ultrawide camera capable of some interesting macro shots). Is the 3x telephoto zoom worth the upgrade? What about the addition of ProRes video recording in 4K? If you’re using last year’s iPhone, or even the iPhone 11, the decision might be hard to justify dropping the minimum $1,099 for the 13 Pro.

How much camera you want is the biggest determining factor when it comes to picking an iPhone now, but no matter how you slice it, they’re all fantastic. While iPhones have always shone brightest in ideal conditions, each year the iPhone gets better and better at shooting in the dark, The iPhone 13 continues the trend of performing admirably in the low light, bringing its Night Mode photo feature to every lens on the iPhone 13 lineup.

Read More: Tim Cook on the ‘Basic Human Right’ of Privacy and the Technology That Excites Him the Most

Other modes, like the new Cinematic mode, are appealing to the amateur videographers but are pretty niche (how often are you really setting up for rack focus shots) and still feel experimental in their execution. The AI-powered image blurring is pretty noticeable when it misses, and not that compelling even when it hits. Other features, like the photo preset option that lets you apply your own saved preset warmth and tone edits to the photos you take, are definitely useful if going for a certain aesthetic, and could help people discover their own personal photography style.

The A15 Bionic processor adds more cores for more machine learning intensive tasks, like portrait mode photography and video processing, but will you notice it? Probably not! Still, that upgraded processing power is what allows Apple to add features like the showcased cinematic mode, and the inclusion of ProRes recording, although ProRes recording in 4K is exclusive to the 256GB, 512GB, and 1TB versions of the iPhone 13 Pro and Pro Max (the 128GB 13 Pro records ProRes in 1080p).

One consistent inconsistency when it comes to the iPhone 13 Pro is its lack of a USB-C port. I’ve long maintained it makes no sense to call the iPhone 13 Pro a “pro” device, fit for use in your creative project’s workflow if it lacks the connector shared by the other “pro” devices in Apple’s lineup like the iPad Pro. The use of a lightning connector means connecting your iPhone directly to a digital camera for example requires not just a USB-C cable but a Lightning adapter for SD cards or a Lightning to USB-A adapter.

Read More: An Open Letter to Tim Cook on Why Apple Should Compromise With Antitrust Regulators

Additionally, the brand new iOS 15 has various software improvements that compliment the iterative features found in the iPhone 13. Improvements to FaceTime, one of many videoconference apps thrust into the spotlight as the COVID-19 pandemic continues, receives plenty of user-friendly updates that make it easier to chat with someone while enjoying media like videos, music, and even your own screen.

The minor enhancements can certainly add up to a major update for some looking for a new iPhone. But if you’re struggling to get excited about it, there’s a reason for it.

Not only is the new iPhone more of the same smartphone we’ve come to enjoy, it’s not even that cool compared to other smartphones. Microsoft’s Surface Duo was a valiant attempt at a dual-screen phone. LG’s Wing smartphone has a rotating second display. Motorola’s Razr is back as a full screen flipping smartphone. Meanwhile, the biggest design change on Apple’s roster are some slight camera lens adjustments.

While this is a pleasant, if minor, refresh, here’s hoping Apple pulls out all the stops next year. 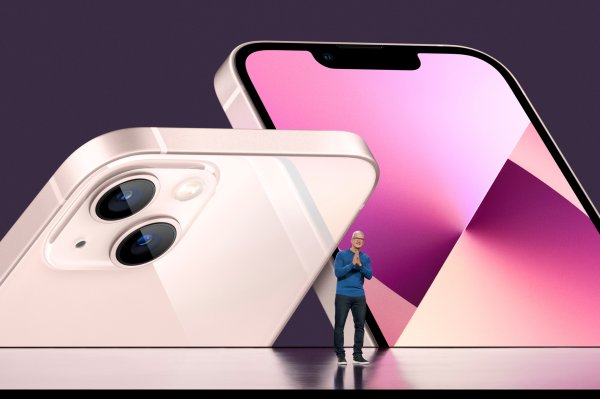 5 Big Takeaways From Apple’s iPhone 13 Event
Next Up: Editor's Pick