20 Years After 9/11, the West Can Still Salvage Its Standing in the World

An American flag is unfurled at sunrise at the Pentagon in Washington, D.C., on Sept. 11, 2019, the 18th anniversary of the attacks.
Patrick Semansky—AP
Ideas
By Ali Soufan
Ali Soufan, a former FBI special agent and the lead investigator on some of the world's most complex international terrorism cases, gained an international reputation as a top counterterrorism operative. He is the chairman and CEO of The Soufan Group, founder of The Soufan Center and has been featured in books, films, television series, newspaper articles and documentaries across the globe.

When I deployed to Afghanistan in 2001 to help dismantle the al Qaeda network, I did so with a sense of hope. In the wake of history’s worst terrorist attacks, the United States had resolved to root out evil, and the world had rallied behind us. If ever there were a righteous war, I felt this was it.

Just one year later, in the fall of 2002, al Qaeda and the Taliban were on the verge of not just defeat but extinction. Then America granted them a reprieve. We began moving assets out of Afghanistan in preparation for the disastrous invasion of Iraq. We thus inflicted on ourselves a wound from which we have yet to recover.

By choosing to fight on two fronts—one of them an ill-conceived travesty—we set ourselves up for failure on both. We squandered the goodwill we had built up since 9/11. And most damaging of all, we played into our enemy’s hands.

Years before the attacks, al Qaeda had laid out its long-term plan. Phase One: Dismantle the Western-led international order. Phase Two: Exploit the resulting power vacuums to build hardline Islamic states. Phase Three: Stitch those states together into a globe-spanning caliphate.

Instead of working to counter that plan, we assisted with it. We marched into Mesopotamia, exactly as predicted in jihadi prophesies. At Guantanamo Bay, Abu Ghraib, and so-called “black sites” around the world, we made propaganda for them. And we sealed their recruitment bonanza with our ignominious withdrawals from Iraq and now Afghanistan.

We have paid for these epochal mistakes in blood, treasure and prestige. As Western influence has collapsed, chaos has seeped through the Muslim world like blood through a bandage. Large parts of Libya, Somalia, Yemen, Syria, Lebanon, Iraq and Afghanistan are under the control of anti-American militants. In other words, Phase One of al Qaeda’s grand plan (create power vacuums in the region) is now all but complete—and we did most of the work for them.

Tragically, the War on Terror hollowed out America’s domestic political order, too. We mounted an invasion of Iraq based on outright lies. We abandoned our values to pursue a program of torture that demonstrably did all harm and no good. We mounted an unconstitutional surveillance program that damaged public trust in our institutions. Worst of all, there has never been true accountability for any of these catastrophic policies, nor for the intelligence and political failures that opened the door for 9/11 in the first place.

That marked absence of consequences sent strong messages to opportunist demagogues: If the truth is inconvenient, lie. If the values of a free society get in the way, trash them. The partisan gulf thus grew wider and wider. Not since the darkest days of the Cold War has the cause of liberal democracy been so discredited.

Yet despite 20 years of failure, waste and lies, I have not lost hope. Years ago, I spoke out against torture, not simply to be critical, but because I believed we could set the world on a better path. I still believe it today.

How will we find that path? We must start by seeing the world as it is—not through slogans or theories—recognizing, for example, that while we do need to grapple with “great power” politics, there remains a substantial challenge from non-state actors, too. On that basis, we can begin to craft a genuine long-term strategy to replace the grab-bag of reactive tactics—like invasions and drone strikes—on which we have relied for too long. Instead of seeing only military solutions to our problems, we must take advantage of all our strengths, to include diplomacy, culture, trade, and international development assistance.

Above all, we must view democratic values as a strong foundation on which to build, not an impediment to be overcome. Over the past 20 years, the world has seen America at its worst. If we are to salvage anything from that disaster, we must remember who we are at our best. 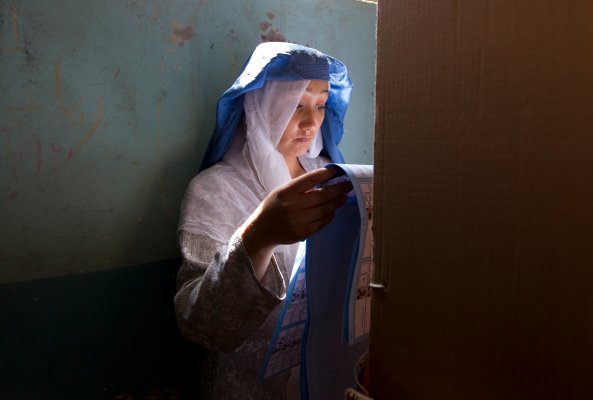 The Afghanistan Biden and Trump Do Not See
Next Up: Editor's Pick