Empires and ‘Effeminate Men.’ After Britain and America, It’s China’s Turn to Worry about Masculinity

If you followed the disastrous denouement of America’s two-decade occupation of Afghanistan, have you wondered why the world’s only superpower has an affliction for distant wars? What is it that compels it to drag its military halfway across the world? What is the origin of its interventionist instincts?

The speeches of Theodore Roosevelt might be a good place to start.

There’s one in particular, known as “The Strenuous Life” that he delivered to a Republican social club in Chicago in 1899, in which Roosevelt, then the governor of New York, lays out his broad ideals of personal and national growth. Making a strong case for American imperialism, he declares peace is “ignoble”, scoffs at a life of “slothful ease”, calls for an end to American isolationism, and urges a “life of strife” to achieve “true national greatness.”

Taking over the presidency within two years, Roosevelt would vigorously pursue those ideals in office, helping America emerge from the 19th century as a global power. He expanded the military—building 11 warships in three years—and exerted US control over Cuba, Puerto Rico, the Caribbean, and Latin America.

In Roosevelt’s scheme of things, imperialism was a necessary “manly” duty that American men needed to take up, or risk letting the reins of global power be seized by a “more manful race.” Sickly and asthmatic in his childhood, Roosevelt had continued to endure attacks on his manliness into his youth as he started out in politics, with newspapers lampooning his high-pitched voice and dandy clothes. For “the exquisite Mr Roosevelt,” forceful public exhortations to wage foreign wars was an exercise in radical image makeover.

A full-length studio portrait of Theodore Roosevelt (1858 - 1919), president of the United States from 1901 to 1909, wearing hunting gear and holding a Winchester gun in an artificial forest setting, circa 1900.
Pictorial Parade/Getty Images

When America began to debate if the Philippines should be set free or become a colony after the US won the Spanish-American War in 1898, Roosevelt led—and won—the imperialist argument, saying: “We the sons of a nation yet in the pride of its lusty youth…know its future is ours if we have the manhood to grasp it, and we enter the new century girding our loins for the contest before us.”

For the 26th president, masculinity was central to national survival. If American men did not rise to the challenge of a “strenuous life” of self- and national struggle, he warned, America risked “becoming China”—content in an easy life within its borders until suddenly finding “what China has already found, that in this world the nation that has trained itself to a career of unwarlike and isolated ease is bound, in the end, to go down before other nations which have not lost the manly and adventurous qualities.”

More than a century on, China is heeding Roosevelt’s counsel and is similarly unsure if its men are up to the challenge of what lies ahead. It’s the familiar curse of self-doubt that besets nations at the point of their global ascent, when states begin to fear that material gains will erode the martial capabilities needed to protect and expand those gains. As it senses its own empire rising, China, too, like other empires before it, has begun to worry about the manliness of its men—its fears accentuated by its memories of historical failures to protect itself from colonial powers.

Last week, the Chinese authorities banned “effeminate” men from appearing on TV and instructed broadcasters to promote “revolutionary culture.” Concerned that young Chinese men are overly influenced by androgynous pop stars, the authorities are cracking down on what it calls a “chaotic” celebrity fan culture, and want broadcasters to “resolutely put an end to sissy men and other abnormal aesthetics”.

Two years ago, the country’s censors began to blur earrings and colored hair on male celebrities appearing on television. Earlier this year, the education ministry announced a plan to “cultivate masculinity” in schoolboys, including hiring more gym teachers and promoting sports.

Read more: Homophobia is Not an Asian Value

The plan came on the heels of a warning from top political adviser Si Zefu of a national “masculinity crisis” as “Chinese boys have been spoiled by housewives and female teachers.” This trend of “feminization” of Chinese boys—already a pampered lot thanks to the one-child policy—“threatens China’s survival and development,” Si believes.

Chinese educators have been worried about the social impact of the paucity of male teachers in lower grades, depriving young boys of male role models. Gender-neutral evaluation standards are also seen as a problem as they do not suitably reward physical activity. In recent years, boys-only schools have been suggested as one of the “de-feminization” initiatives, which are mostly focused on revamping the education system.

Chinese students are seen during a football training session in the campus of the Yuyang Middle School in Wufeng Tujia Nationality Autonomous County of Yichang on June 1, 2016, in Hubei province, China.
Getty Images—2016 Wang He

“Sissy” male stars add an extra layer to the “masculinity crisis,” at a time when President Xi Jinping has been calling for “national rejuvenation.” The fandom associated with dainty male stars, Si rues, means that young boys do not want to be soldiers or firefighters anymore.

A top Chinese government think tank even believes this star-induced feminization is part of a wider CIA operation to emasculate Asian men. The Chinese Academy of Social Sciences accuses legendary star-makers, the Johnny & Associates talent agency, of working with the CIA to degrade Japanese masculinity, leading to the profusion of soshokukei danshi (“grass eaters” or “herbivorous boys”) in Japanese society.

“Herbivorous” men do not actively seek employment, sex, or romantic relationships, are considered feminine with their porcelain complexions and attention to clothing and make-up, and are often blamed for Japan’s economic decline and plunging birth rates. China has for some years now been concerned about the social impact of its androgynous male celebrities, called xiao xian rou (or, “little fresh meat”). They are apparently inspired by the herbivorous stars of Japanese and Korean pop. The recent movement of tanping (“lying flat”), in which young Chinese professionals have been renouncing the competition and hardships of modern life, has only added to the worries about decadence.

International conspiracies and shadow wars aside, anxieties over masculinity and feminization have been a constant recurrence in empire-minded nations. These anxieties stem from rapid economic and social changes that, on the one hand, propel countries to global leadership while at the same time disrupt established hierarchies and cultural norms at home.

In today’s China, glass ceilings persist but gender roles have undergone a sea change. The country has more female than male students in universities and has one of the highest female labor force participation rates in the world—61% compared to America’s 57%, according to World Bank data. Thanks to their purchasing power, Chinese women also have considerable clout as a consumer group. In fact, examples of “little fresh meat” abound in Chinese television drama and shows because that’s the male look the sizable female audience prefers.

In mid-to-end 19th century Britain, gender relations were in a similar flux, leading to male insecurities that, in turn, fed the “enthusiasm for empire as a site of unqualified manliness.” By 1901, women accounted for 11 percent of clerks in England, could live alone or in all-women households, choose their own male company, or not at all, were gaining new rights, and playing an increasingly active role in public life through women’s organizations.

Read more: China’s LGBT Citizens Are Coming Out as an Economic Force

Meanwhile, anxieties about falling male attendance in churches, and fears of dwindling manliness with “overcivilized” men losing touch with nature as a result of industrialization and urbanization, triggered the “Muscular Christianity” movement. Churches began to offer physical activities such as exercise and athletics, and urged men to engage in the then male domains of military affairs, politics, business, imperial adventures, and international evangelism. The eruption of a new literary genre of male colonial adventures by the likes of H. Rider Haggard and Rudyard Kipling further fed the notions of British masculine imperialism.

Soldiers seen in front of the flag of the Communist Party of China at an official event on April 13, 2021 in Luoyang, Henan Province, China.
Jia Fangwen/VCG via Getty Images

Across the Atlantic, too, a combination of rising female power, and the manhood-sapping transformation of independent rural farmers into faceless cogs of urban machines, made for an environment of brittle masculinity. Muscular Christianity reached American shores in the 1870s and gathered pace at the turn of the century; Roosevelt grew up in a household that practiced it. Boys’ lodges and fraternal bodies such as the Boy Scouts began to crop up, aimed at preventing “feminization” of young boys. Bodybuilding emerged as commercial enterprise, while college sports and recreational athletics like bicycling picked up.

Even as the cultural belief of America’s “manifest destiny” to play a global role was becoming widespread, popular culture bristled with male insecurities over whether the country would be able to keep its date with destiny. “The whole generation is feminized,” a protagonist in Henry James’s 1886 novel The Bostonians outrages, almost in the manner of Si Zefu. “The masculine tone is passing out of the world; it’s a feminine, a nervous, hysterical, chattering, canting age, an age of hollow phrases and false delicacy and exaggerated solicitudes and coddled sensibilities, which if we don’t soon look out, will usher in the reign of mediocrity,” he says.

When Roosevelt was telling Americans that “there is only a very circumscribed sphere of usefulness for the timid good man,” it wasn’t just one man projecting his masculine anxieties on a rising empire. He was channeling the period’s zeitgeist of nervous aspiration.

So could be Si Zefu, as a new empire rises, while the old one has tired of the strenuous life of strife and wants to return home. 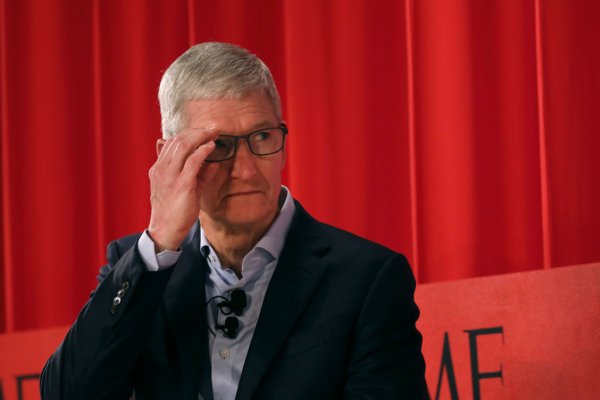 An Open Letter to Tim Cook
Next Up: Editor's Pick