Why 'Common Prosperity’ Has China’s Billionaires Running for Cover

China's President Xi Jinping speaks in Beijing on July 1, 2021, at a ceremony marking the 100th anniversary of the founding of the Chinese Communist Party
Ju Peng/Xinhua via Getty Images
By Charlie Campbell / Shanghai

In a sign of how far China’s leaders have drifted from their revolutionary roots, the biggest shock gripping the country today is that the ruling Chinese Communist Party (CCP) might actually be socialist after all.

The shakeup centers on the phrase “common prosperity.” It was first introduced by revolutionary leader Mao Zedong but has now been taken up as the defining mantra of a new era as imagined by current strongman President Xi Jinping.

In an Aug. 17 speech to the CCP’s Central Committee for Financial and Economic Affairs—his first since the secretive, annual summer leadership conclave at the seaside town of Beidaihe—Xi declared that “Common prosperity is an essential requirement of socialism and a key feature of Chinese-style modernization.” He used the phrase 15 times in total in his address and it’s become a refrain ever since.

According to the official People’s Daily, the goal is to build a more egalitarian China by “expanding the proportion of middle-income groups, increasing the incomes of low-income groups, reasonably adjusting high incomes [and] banning illegal incomes.” Nobody doubts that the CCP would also like to leverage common prosperity to reassert its authority over China’s high-fliers.

“These billionaires and tech companies are very risky to the CCP because they are seen as an alternative form of social and political power,” says David Moser, an associate professor at Beijing Capital Normal University.

In response, skittish investors have started dumping their stock. Up to $1 trillion has been wiped off the valuation of Chinese firms since February, after regulators began targeting electronic payment providers, real estate developers, private tuition companies (a vast, $120 billion industry in education-hungry China) and the gaming sector. The latter—a giant and highly lucrative market generating $44 billion in earnings last year—is now reeling from new directives banning children from playing more than three hours of online games a week.

In a bid to ease concerns, the People’s Daily ran an editorial Wednesday, saying that the regulatory moves were not designed to hurt business and the status of the private sector remained the same. But there’s no denying that the biggest socio-economic change, since reformist leader Deng Xiaoping unleashed market forces in the late 1970s, is now underway. In words that have since become infamous, Deng kicked off the country’s export-driven resurgence with the exhortation: “Let some people get rich first.” Many forget that he went on to say that those allowed to achieve wealth would be expected to “lead other regions and people to gradually achieve common prosperity.” His successors now look poised to make good on the bargain.

Read more: What the Crackdown on China’s Tech Firms Is Really About

A senior CCP official said last month that “common prosperity” does not mean “killing the rich to help the poor.” But rumors are swirling that Beijing may bring in property, inheritance, and capital gains taxes to level the playing field in a society where the top 1% now control 31% of wealth, according to Credit Suisse—up from 21% two decades ago. The preferential 10% tax rate enjoyed by internet companies is also expected to be rolled back in favor of the standard 25% corporate rate.

“Xi is saying, ‘Hey, I found the magic sauce,'” explains Sung Wen-Ti, a scholar specializing in the CCP leadership at the Australian National University. “‘I’m going to continue to use this socialist market economy to encourage economic growth, while redistributing wealth in a way that doesn’t lead us back to the Mao Zedong days of poverty.’”

Chinese tourists crowd as they leave the exit of the Forbidden City on October 6, 2020 in Beijing, China.
Kevin Frayer/Getty Images

The meaning of common prosperity

In July, to mark the CCP’s centenary, Xi announced that the goal of building “a moderately prosperous society in all respects” was complete, having already declared absolute poverty eradicated. By 2049, the centenary of the People’s Republic, the goal is to “build a modern socialist country that is prosperous, strong, democratic, culturally advanced and harmonious.”

Of course, “democratic” means different things in China than it does in the West, but there’s no doubt that the goal of a “socialist country” is more important to Xi than it was to his immediate predecessors. So far, celebrities who flaunt their wealth and welch on taxes have found themselves abruptly taken off the Chinese internet. Officials have also announced the ramping up of a scheme to rotate the best teachers among different schools in order to equalize education standards. Ride-hailing firm Didi and e-commerce platform JD.com have meanwhile moved to establish trade unions for their staff, who until now have typically been employed casually via third-party contractors, receiving paltry benefits. But the central government has offered little specific guidance as to what socialism and common prosperity mean in practice.

The vagueness mirrors an anti-corruption drive started by Xi in 2012. Instead of new laws and regulations to ensure transparency and accountability, that purge instead borrowed from the ancient Chinese tactic of “kill a chicken to scare the monkeys,” says Moser—making an example of 1.5 million officials, a comparatively small number, to send a clear message to all 90 million apparatchiks that graft was no longer tolerated.

This is the context in which China’s wealthiest have been left to interpret the implications of common prosperity for themselves. Unsurprisingly, they have been throwing money at the problem, pouring billions into charitable foundations as a gesture of appeasement.

A woman walks past a sign celebrating the centenary of the Communist Party of China, with the CCTV headquarters seen in the background, on June 28, 2021 in the central business district of Beijing.
Andrea Verdelli/Getty Images

On Thursday, Jack Ma’s e-commerce giant Alibaba pledged 100 billion renminbi ($15.5 billion) to fund common prosperity initiatives until 2025. That came on top of an earlier pledge of 100 billion renminbi from Tencent, and 10 billion renminbi from bosses at each of Pinduoduo, Xiaomi and Meituan, for various social projects. Alibaba had already been in the spotlight after regulators fined the firm $2.8 billion and nixed the $37 billion IPO of its fintech arm, Ant Group, which was subsequently ordered to restructure. Notably, the firm—along with several of China’s most profitable corporations—is based in Zhejiang province, chosen as “a demonstration zone for achieving common prosperity,” according to the official Xinhua news agency.

“Xi doesn’t want to be seen as someone who’s in league with these giant tech companies and billionaires, so he’s cracking down on them,” says Moser. “It’s a populist move so ordinary people feel the CCP is on their side.”

Reading the political winds, many of China’s most famous tycoons have quietly stepped back from boardroom positions in recent weeks to take roles with a social focus. ByteDance’s Zhang Yiming, JD.com’s Richard Liu, and Pinduoduo’s Colin Huang, have, like Jack Ma before them, backed out of the limelight. It’s certainly not the first storm than any of them has weathered.

Says Moser: “The fact of the matter is that these people are excessively rich, and donating a little bit of that money is not going to hurt them.”

Correction, Sept. 10.
An earlier version of this story misstated David Moser’s accademic affliation. He is an associate professor at Beijing Capital Normal University and no longer at Yenching Academy of Peking University. 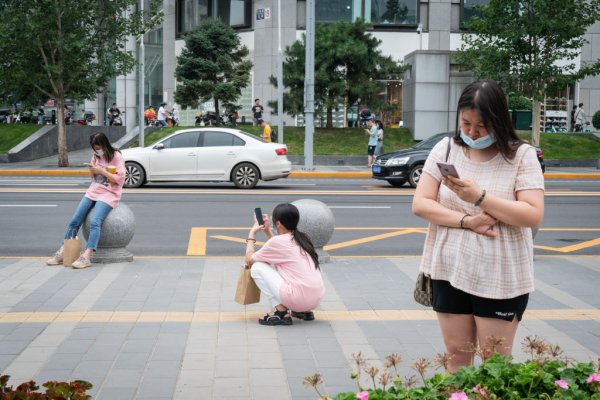