I Survived Bill Cosby. And I Will Not Be Defeated by His Release

Andrea Constand, center, at a press conference on Sept. 25, 2018 in Norristown, Pa., after comedian Bill Cosby was sentenced to at least three years in prison.
Brendan Smialowski—AFP/Getty Images
By Andrea Constand

On the final day of Bill Cosby’s sentencing hearing in 2018, as I had prepared to leave the court for the last time, Detective Jim Reape—a witness in the trial where Cosby was found guilty of indecent assault—approached me. “There are a few people who’d like to meet you,” he said.

Jim led me into a small room down the hall from the courtroom. There, six or seven of the jurors—including the foreperson, Cheryl Carmel—were waiting for me. When I walked through the doorway and saw those men and women who had listened to my story almost six months earlier, I was overwhelmed with emotion. I started to cry. One by one, they came up to me and introduced themselves. As we hugged, I heard the same words over and over: “We always believed you, Andrea.”

Their verdict told me they had come to the conclusion that my testimony was credible. But there was something about hearing the words, “We always believed you,” that knocked the wind out of me.

During the trial, when Kristen Gibbons Feden, one of the prosecutors, had asked why I was there—in the courtroom, at the center of a criminal case—I had said, “For justice.” That was true. I had wanted to see Cosby held to account for all the pain and damage he had wrought. But the jurors’ words made me realize something else. While I had cooperated with the district attorneys because it was the right thing to do, what I wanted more than anything was to be believed.

I think this is what every one of us needs—sexual abuse survivors, certainly, but also all those whose reality is not recognized or understood by others. When our truth is denied by people around us, it creates a wound that can be as grievous as any trauma. Making sure that abusers can’t continue to abuse is, of course, of the utmost importance for the safety of individuals and the good of society. But for those of us who have already been victimized or marginalized, our bruises can never fully heal until our truths are accepted and believed by friends and strangers alike.

In deciding their verdict, the jurors had given me the gift of seeing justice delivered. In sharing their feelings with me in person, they were giving me an even greater gift.

Once the sentencing was behind me, I knew that I had to turn my focus inward. My lawyers and I had long before settled a civil suit with Cosby in 2006. The drama had restarted when a video of the comedian Hannibal Buress calling Cosby a rapist went viral in 2014. And then the two criminal trials, in 2017 and 2018, had again traumatized me.

For years I had worked hard to keep myself emotionally and spiritually afloat. But I was treading water all the time; even my most strenuous efforts simply prevented me from sinking. When my civil suit concluded, I had tried to put Cosby and the past behind me. I’d tried to forget about all of it. Now I know that wasn’t the way to become the person I was meant to be. Moving forward meant putting the pain behind me but embracing—and building on—all the good that had come out of my experience. It’s tempting to say that everything I went through made me stronger, but it’s impossible to imagine the person I might have been if my life’s path had been different.

Yet, I’ve certainly learned about my strengths and my own character. I’ve developed a greater capacity for compassion and forgiveness. I’ve learned that when faced with difficult decisions in life, it’s important to do the right thing, no matter how frightening. It’s in uncomfortable moments that true growth happens. If we don’t walk through storms, we will never escape them. We will never heal.

Perhaps most importantly, I now know that peace and comfort never come from an external event, like a trial or a verdict. If we want to heal ourselves, we must look inside.

I was reminded of this again on June 30, 2021 when my journey for truth and justice took a sharp turn. It was a little before noon, and I had just come back from a long, sun-soaked walk with my now 15-year-old poodle Maddy, when my phone rang. It was Kate Delano, director of communications for the Montgomery County DA’s office. She was calling to tell me that the Pennsylvania Supreme Court was about to announce its decision regarding Cosby’s appeal.

The next hour or so trickled by as I did my best to stay calm and centered. But when my phone rang again, I pounced on it. A chill went through me as I heard the heavy, rushed tone of Kate’s voice. “Andrea,” she said, “the Supreme Court has vacated his conviction.”

Read More: What Bill Cosby’s Release Really Says About Getting a Conviction Overturned in America

I was stunned. The judges had not declared a mistrial or simply overturned the jury’s verdict. They had rejected the charges against Cosby altogether, accepting the idea that the former district attorney, Bruce Castor, had given Cosby immunity. That meant Cosby could never again be brought to trial for my assault. He would, in fact, walk out of the prison shortly after Kate’s call.

I had no time to absorb this shocking news. My phone began ringing and beeping incessantly—friends, family and news outlets, all wanting to hear from me. Almost three years after the most challenging period of my life had concluded, I was back in a media maelstrom. As call after call came in, I struggled with my growing outrage. But when I saw my lawyer Bebe Kivitz’s name on my phone, I knew that as much as I wanted to cry, now was not the time for tears. It was, instead, time for action. Indeed, Bebe was calling to discuss the statement that she, another member of my legal team Dolores Troiani, and I would release later that day.

We expressed disappointment with the legal decision, intense concern for the impact this event might have on anyone who has experienced sexual assault and gratitude for all the women who bravely came forward with their stories. We ended with an encouraging call to survivors to make their voices heard, and noted that we have no further comment.

While that last line may be true for Bebe and Dolores, I do have further comment. Now that I have weathered yet another strange turn in this long saga, I realize that I cannot let reversals like the Supreme Court decision defeat me. Life is unpredictable. Much is beyond our control. In the end, happiness is all that matters—and I am determined to live a happy, purposeful life.

Excerpted from The Moment: Standing Up to Bill Cosby Speaking Up for Women by Andrea Constand. Copyright © 2021 Andrea Constand. Published by Viking Canada, a division of Penguin Random House Canada Limited. Reproduced by arrangement with the Publisher. All rights reserved. 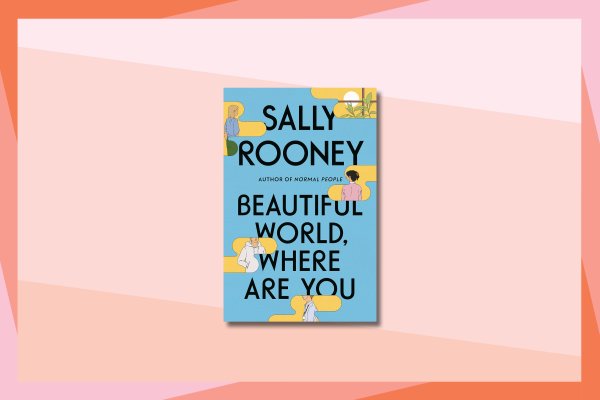 Sally Rooney and the Millennial Novel
Next Up: Editor's Pick