What to Know About Drake's New Album Certified Lover Boy, From Its Controversial Cover Art to That R. Kelly Credit

Drake’s most memorable work has always centered on his many, many feelings about the women he can’t control—the ones who have left him, wronged him (at least, according to him) or didn’t love him back. His career, his persona and even his sound project the carefully constructed narrative of the sensitive, lovelorn sad boy, an image that’s at odds with subtle and sustained misogyny lurking beneath his lyrics as he obsesses over “good girls” and invokes a savior complex for those whose behavior he deems unsavory.

With this tension in mind, it’s intriguing that the Toronto rapper describes his new album Certified Lover Boy, as “a combination of toxic masculinity and acceptance of truth,” noting without a whiff of irony that this mix is “inevitably heartbreaking.”

The album, which arrived in the wee hours of Friday morning, was originally slated to drop in January 2021, but was pushed back nine months after Drake tore his ACL. This delay provided the perfect environment to fan the flames of the rumored beef between Drake and Kanye West, whose long-anticipated and polarizing album Donda dropped on Aug. 29, less than a week before Certified Lover Boy.

Here’s what you should know about Drake’s sixth studio album Certified Lover Boy.

Drake leans into the lovelorn sad boy, but doesn’t evolve past it

On Certified Lover Boy, Drake re-ups on the melodramatic, forlorn sad boy mourning past relationships formula he’s honed over the years to mainstream and critical acclaim, churning out songs that are introspective and darkly romantic, reminiscent of the hypnotic, if unhealthy ennui he honed on past hits like “Marvin’s Room.” This reflective energy is most compelling on tracks where he has a strong assist, like “Fountains,” the dreamy track featuring Nigerian singer Tems, his excellent and wistful Kid Cudi collaboration, “IMY2,” or the grown and sexy “Get Along Better,” which features criminally underappreciated Ty Dolla $ign to great effect.

That’s not to say that there are no hype tracks on this album; the opulent and bombastic “You Only Live Twice” featuring Lil Wayne and Rick Ross, an apparent sequel to Drake’s 2011 track “The Motto,” provides ample fun, while the absolutely ridiculous track “Way 2 Sexy” featuring Future and Young Thug, which heavily samples Right Said Fred’s equally absurd song “I’m Too Sexy,” will undoubtedly become a viral hit on TikTok, providing a dose of levity to an album dominated by lovesick feelings.

Where Certified Lover Boy falls short, however, is in showing any evolution, thematic or emotional, since Drake released his first mixtape nearly 15 years ago. Drake has always been a mastermind of controlling the narrative, using everything from social media to personal drama in his life to curate his image. From his savvy, Twitter-aided deployment of a beef with Meek Mill to promote new music to his repeated self-deprecation about his vulnerabilities, reinforced by his unrequited love for Rihanna, he might come off as corny or sentimental, but he does so on his terms. Such a tightly controlled presentation, however, can grow grating over time, especially with a schtick like Drake’s that banks on fans caring about the emotional messiness of his personal life.

Despite his claim that the album is about “toxic masculinity and acceptance of truth,” Drake makes no effort to actually reckon with the havoc wreaked behind his “nice guy,” “Captain Save-a-hoe” persona, instead choosing to double down on his feelings, his sensitivities, his no-longer-so subtle misogyny, throughout the album. The most overt instance of this is on “Girls Want Girls,” where Drake bizarrely tells a woman, “Say that you a lesbian, me too,” while openly fetishizing her sexual orientation, while elsewhere on the album, slut-shaming, respectability politics and casual sexism run rampant.

Drake teams up with Damien Hirst for cover art

Perhaps it should come as no surprise that Drake, a longtime fan of using emojis to promote his music, turned to a high art interpretation of the pregnant lady emoji for his latest cover art. Employing the talents of conceptual artist Damien Hirst, the cover features a collage of pregnant lady emojis in different skin and hair tones that some fans believed also paid homage to Hirst’s notorious spot paintings and his controversial 2005 sculpture, “The Virgin Mother.”

The cover, ripe for Internet clowning, quickly became a meme and a point of derision for many fans. Even Lil Nas X weighed in on the discourse with a troll of his own.

Brevity has never been Drake’s strong suit, and Certified Lover Boy is certainly no exception, but the whopping 21 song tracklist and 86-minute album provide ample room for a packed, all-star lineup including longtime collaborator and toxic king Future, his mentor Lil Wayne, Rick Ross, and Tems. In addition to the listed features, Nicki Minaj has a brief spoken-word interlude on the track “Papi’s Home.” To tease the album’s release, Drake took out electronic billboards in the hometowns of his collaborators, ranging from Atlanta to Lagos, Nigeria, to announce his features.

Hip-hop fans were quick to point out that many of the other features, like Jay Z, Travis Scott, Kid Cudi and Young Thug, also appeared on Kanye West’s new album, Donda, an element that’s not insignificant since the two rappers allegedly have beef (more on that below).

Drake also shows off his wide-ranging and eclectic taste in music on the project, with samples that include the Beatles song “Michelle,” the Notorious B.I.G.’s “Life After Death Intro,” and, memorably, Right Said Fred’s “I’m Too Sexy.”

But the most shocking inclusion on the album is a songwriting credit for R. Kelly on the track, “TSU,” which Rolling Stone reports interpolates a sample of Kelly’s song, “Half on a Baby.” Kelly is currently on trial for federal sex trafficking and racketeering charges.

About that possible Drake and Kanye beef…

While tension between Drake and Kanye West has allegedly been simmering for years now, a now-deleted screenshot that West posted to Instagram of a text exchange purportedly with Drake, which included a picture of the Joker and the addition to the chat of acknowledged Drake nemesis Pusha T, led many fans to believe that the two rappers were beefing ahead of their respective rivaling releases.

If that’s the case, Drake’s track “7 am on Bridle Path” might be the closest thing to a confirmation of the rift that fans will get. While he doesn’t reference Kanye by name, there are plenty of subs that could be interpreted as digs at Kanye, including an allusion to Justin Laboy’s catchphrase “respectfully,” as Laboy was key in West’s album rollout, and an oblique reference to the rumor that West may have revealed Drake’s address on social media.

“You know the fourth level of jealousy is called media/Isn’t that an ironic revelation?” Drake raps on the track. “Give that address to your driver, make it your destination/ ’Stead of just a post out of desperation/This me reachin’ the deepest state of my meditation/ While you over there tryna impress the nation/ Mind’s runnin’ wild with the speculation.”

While there’s no way of knowing if the lyrics are really about West, on social media, fans were quick to back up their belief that the song was a diss track to West. 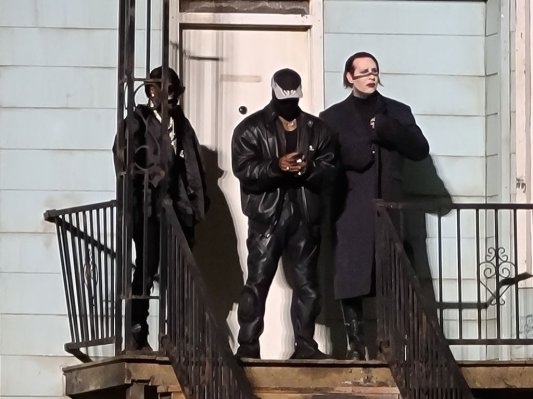 What to Know About Kanye West's Controversy with 'Donda'
Next Up: Editor's Pick